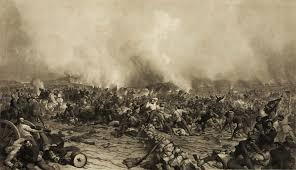 Gettysburg nestles in long, rolling hills, surrounded by peaceful farmland, but there is nothing pastoral about the way it can make you feel. The Civil War site was the home of the largest and deadliest battle to take place on American soil in US history.

The three-day battle, combined with Grant’s victory at Vicksburg, was the decisive turn for the war. The Confederates had been slowly pushing north, their confidence growing after a glorious victory over the Army of the Potomac at Chancellorsville. Having outnumbered and driven out Federal forces from the town to Cemetery Hill, Robert E. Lee sought to press his advantage by attacking Cemetery Hill before the bulk of the Union army arrived. However, the commander of North Virginia’s Second Corps, declined, considering the federal position too strong.

It’s difficult to say how much his reticence would have changed the outcome of the battle. By the time the Confederates attacked, the Union had taken up strong positions along Culp’s Hill to Cemetery Ridge. Over nine thousand lives were lost on both sides during the first day of fighting. The combined total, after two days of war, was 35,000. By the fourth day, as defeated Confederate troops crept home during heavy rains, the Union army had lost 23,000 men, while Lee limped south after losing one-third of his army; 28,000 men. (1)

Even on a warm, pleasant day, Gettysburg gives you a chill, especially among the dark and clammy rocks of Devil’s Den. The stone outcropping gave shelter to the Confederate sharp-shooters picking off Union soldiers at Little Round Top. The second day of battle was so furious, a total of 7,900 men had crowded into this one small area. At the end of the day, 2,600 men had been killed. So many Confederate soldiers died within the space between Devil’s Den and Little Round Top, that the area was often referred to as the Slaughter Pen. A nearby creek turned red with blood. 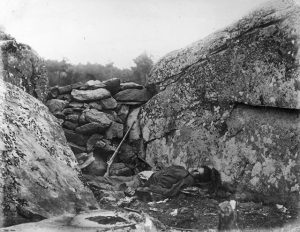 Visitors today report that when they visit Devil’s Den, their digital cameras and cell phones suddenly stop working, even though they function just fine in any other part of Gettysburg. A frequent sighting is a barefoot man in ragged clothes who seems quite eager to be useful. He will point out places like Plum Run, saying, “this is what you are looking for”, then promptly disappear, leaving his audience bewildered. He has become such a large part of the Gettysburg experience, he is often referred to as the “helpful hippy”. (2)

Adding to the feeling of quaint countryside is the Sachs Covered Bridge. Built in 1852, the bridge was used by both Confederate and Union troops during the struggle to take Gettysburg. The handsome, eleven year-old-bridge witnessed more than proud carriages, high-stepping horses and cavalry men. According to legend, three Confederate deserters were caught and hung from the bridge rafters. If you prefer conspiracy theories, another legend states they were three Confederate spies hung by Union men. Their fate remained the same. To this day, there are those who claim they have seen the ghostly silhouette of the young men hanging from the rafters. 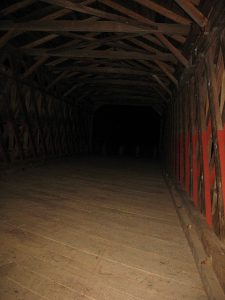 The bridge almost seems to be a conduit between the past and present. Closed to automobile traffic in 1968 and repaired after a flash flood significantly damaged it in 1996, it still traps the sounds of the Gettysburg battle. Among those who have dared to walk across the bridge, many have reported breathing in the smell of a cigar or feeling a tap on the shoulder when nobody was there. Others state they could hear cannon balls firing in the distance. (3)

During the raging three-day battle, only was civilian was killed, a young woman by the name of Jennie Wade. She had risen early on the second day of fighting to bake bread for the soldiers when a stray bullet went through the door and hit her in the back, killing her with bread dough still clinging to her fingers. The townspeople say she still haunts the streets and visitors to the house state they have heard loud bangs and the innocent voice of a child. Some have felt a sudden rush of cold air or felt children clinging around their knees. (4) 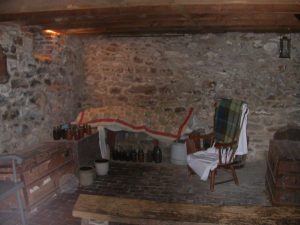 Some feel Jennie haunts because she has unfinished business, although finishing the bread was probably not the business she had in mind. Reports say her mother had finished the task that day. Maybe she is still waiting for her fiancé, Corporal Johnston Hastings Skelley and doesn’t know he has already joined the spirit realm, having been killed in action just a week after she died. (5)

Pennsylvania Hall is the central administrative building and Gettysburg College’s oldest building. Built in 1832, it was used as a hospital for wounded troops by both the Union and the Confederate armies. Initially, the Pennsylvania College of Gettysburg, now known simply as Gettysburg College, shared the Gettysburg Academy Building with the Gettysburg Theological Seminary, housing student quarters along with several offices and recitation rooms. 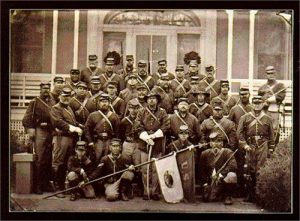 It was the largest building in town at the time. Battle casualties treated at the hall totaled nearly 700 by July 29, 1863, many of whom died in the building or on the surrounding property. When the college resumed classes on September 24 of that year, there were still bullets, bones, human remains and bloodied books in and around the building. (6)

It was years before the last of the Civil War relics were cleared, and even then, numerous artifacts of historical significance were discovered within the walls and under the floorboards during a 1969 renovation. However, the college has not been able to clear its ghosts.

It’s not unusual to see a ghostly Civil War soldier stand guard from a tower at Pennsylvania Hall. According to the legend, the specter was a signalman from when the Confederates occupied the college.

He often aims his rifle at the students on the ground, which has sent many alarming reports to administrators. But when the tower was checked, it was locked up tight and nobody was around.

One of the most spine-chilling stories was covered by Unresolved Mysteries. (7) The terrifying experience was shared by two office administrators in the early 1980’s. After working late at night on the fourth floor, the two left together on the elevator. Their intention was to get off on the first floor. Instead, inexplicably, the elevator plunged to the basement instead, and a trip into a nightmare world. When the doors opened, the administrators saw dead and dying men on the floor while blood-covered doctors and orderlies rushed about frantically in their efforts to save lives.

The first thought was that students had been playing a prank. When the frightened couple reported the incident to the guard on duty, he rushed to investigate, but when he entered the basement, he found nothing. 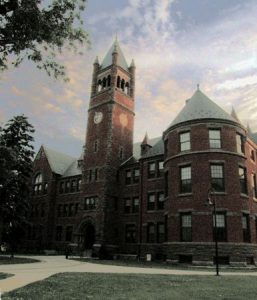 The Civil War left thousands of orphaned children. A few have made their complaints known in Gettysburg. There was a critical need to house, clothe, feed and educate these destitute children. An orphanage was built in Gettysburg in 1868, with twenty-two children, but by 1869, there were sixty and the facility was overcrowded.

During this time period, a new teacher and disciplinarian by the name of Rosa Carmichael was hired who seemed the perfect solution to the budget-strapped committee. They praised her as “having few equals and was a most assiduous and faithful worker”. (8)

It wasn’t long, however, before complaints began to surface over her abuses to the children. She left a child of four penned in an outhouse until two men passing by heard the pitiful sobs of the boy. She left a little girl standing in one position on her desk for so long, she had to be lifted down, completely exhausted. There were reports of a makeshift dungeon where she kept children in shackles, sometimes until their untimely death. A later investigation uncovered torture devices in the basement. 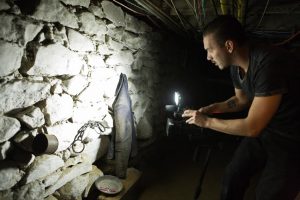 Because of the scandal, the orphanage closed, and the property sold at the Sheriff’s sale, where it is now known as the Soldier’s National Museum. The change in venue did not release the abused children from this house of horror. To this day, people have reported hearing children crying or laughing, felt them tug at their clothes and sometimes make their appearances. Even Rosa’s apparition sometimes appears to keep her ghostly charges miserable.

Despite the peaceful landscape, there is never a sense of tranquility when viewing Gettysburg. There is scarcely a foot of earth beneath your feet that isn’t said to be haunted. Within the area around Double Day Inn, a mass grave, called Iverson’s Pit, covers the slaughtered bodies of an entire brigade of North Carolina soldiers. (9) 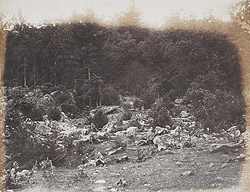 The full horror of the Civil War visited Gettysburg, a horror that took thousands of lives in a matter of days and left thousands of children without parents. It’s as though the historical battle has been superimposed over the present, fated to be fought over and over. Is it our imaginations, still burning with events that happened over a hundred-fifty years ago that involves these ghostly images, or is it the restless burial ground of thousands of spirits caught in the passions of the three-day battle? Anyone visiting Gettysburg leaves with one impression; the hope that it never happens again.

Gettysburg nestles in long, rolling hills, surrounded by peaceful farmland, but there is nothing pastoral about the way it can make you feel. The Civil War site was the home of the largest and deadliest battle to take place on American soil in US history. The three-day battle, combined with Grant’s victory at Vicksburg, was…

The Pre-Feminist View of a Woodstock Flower Child