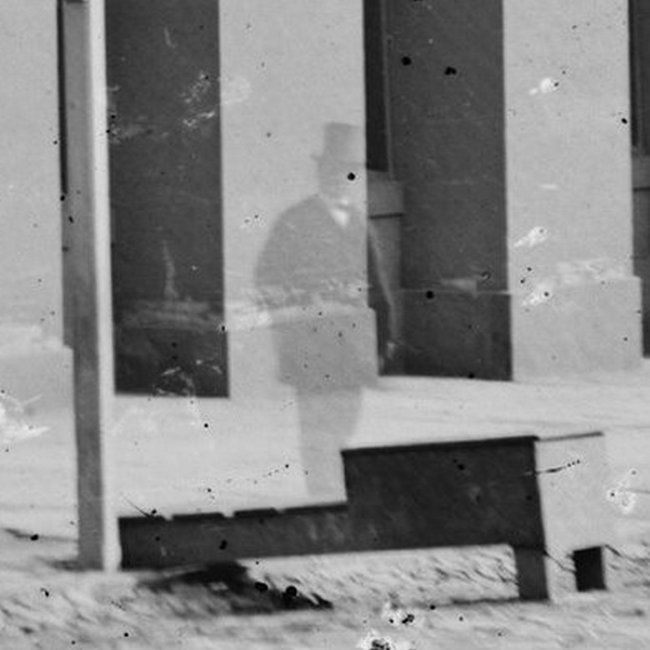 A visit to Capitol Hill naturally provides a sense of living history as decisions that influence world views are enacted daily. For those who reside behind the doors of the White House and deliberate within the Capitol Building, however, “living history” is experienced quite literally. Capital Hill is one of the most haunted areas in the United States.

The District of Colombia was perhaps fated to retain ghosts from the very beginning. In its infancy, the site chosen for the Capitol seat was a loose collection of claims held primarily by wealthy landowners. As the planned center of the nation, real estate value increased rapidly as prominent and powerful people sought to make the new-born city their home. Only one estate stood in the way of their plans; a modest 700 -acre farm owned by Mr. David Burnes.

Burnes was described in 1790 as a willfully bigoted man who took the opportunity to disagree with anyone and who enjoyed seeking out arguments. An attempt by George Washington to negotiate his west end lands for the purpose of building the President’s mansion left our first president referring to him in exasperation, “that obstinate Mr. Burnes”. Eventually, Mr. Burnes did surrender his lands, but at a far more satisfying price than he had originally been offered. His disdain for George Washington never wavered, however. He is probably the oldest ghost to be heard in the Capitol Building, usually in the Oval Office, stating “I am Mr. Burnes.” (1)

Haunted houses have their believers and have their skeptics, but it can be very difficult to scorn the words of well-known states people. Eight different presidents have sworn they’ve seen ghosts in the White House, as well as some other important dignitaries, such as Winston Churchill and Queen Wilhelmina of the Netherlands. (2)

Abigail Adams, the wife of John Adams, the second president of the United States to take office, as well as the mother of the sixth president, John Quincey Adams, apparently felt her chores at the White House extended long beyond her husband’s term in office. Born November 22, 1744, the second First Lady was the first one to live in the White House. Although George Washington had selected the site and oversaw its construction, he and his wife, Martha, never lived there. Was this the reason Abigail Adams felt it so difficult to let go?

She had made her peace, telling her friends not to grieve and telling John it would not be long before they were together again. She died October 28, 1818 of typhoid fever, just two weeks before her 74th birthday. John died eight years, in 1826, and the two were interred in Quincey, Massachusetts, but according to reports by White House staffers, she didn’t stay there. Her ghost has been seen walking toward the enormous East room, her arms extended, as though she was carrying a laundry basket. The reports included the scent of laundry soap and damp clothing. William Taft, who served as president from 1909 to 1913, and as Chief Justice from 1921 to 1930, insisted Abigail Adams was a very busy lady, still floating through the halls of the White House and hanging out her laundry. (3)

Abigail Adams isn’t the only First Lady to keep vigil over the Capital. Woodrow Wilson’s wife, Ellen, quickly learned to leave alone Dolley Madison’s rose garden. The beloved Revolutionary war heroine was most noted for her bipartisan leadership as the wife of the fourth president, James Madison, one of the Founding Fathers in drafting the Constitution (4) but apparently, she had a special fondness for her rose garden. Her one rule for not riling her spirit was that it should not be disturbed.

When Woodrow Wilson took office as the president in 1913, Ellen inadvertently opened the door to yet another First Lady apparition by deciding to replace the rose garden with something more to her tastes. However, when workmen showed up, Dolley’s disapproving ghost scared them so much, they refused to follow out the First Lady Wilson’s orders. (5)

While our initial First Ladies are busy keeping the White House clean and the rose garden attended, and Mr. Burnes is asserting he’s still around, Andrew Jackson, the nation’s illustrious seventh president, is having a field day in his former bedroom. The Rose Room is considered the most haunted room in the White House. White House staff have reported hearing President Jackson swear, shout, laugh and toss things around in what had once been his private quarters and has disturbed the sleep of Harry S. Truman, who remarked “the damned place is haunted, sure as shooting.” (6)

Mary Todd Lincoln was the first to report Andrew Jackson’s presence. Consumed with grief over the passing of her son, Willie, who died in 1862, Mrs. Lincoln began holding seances in the White House. One of the spiritualists she invited, Nettie Maynard, claimed to have been playing the piano when it lifted off the floor. (7) Other supernatural occurrences included a visit from a Dr. Bamford, who encouraged Lincoln to attend the front lines of the Civil War battles and listen to the grievances of the troops, an eerie vision by Lincoln of his impending death and occasional visits from Andrew Jackson, who Mary Todd reported, swore and stomped around in the Rose Room. 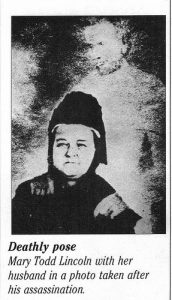 Could it be that Mary Todd Lincoln’s interest in spiritualism created a gateway for her husband’s ghost to appear long after his death? Abraham Lincoln’s spirit has been the most frequently viewed specter in the White House. He has visited Calvin Coolidge’s wife, Grace, in the Yellow Oval Room, standing at the window, looking out over the Potomac. Other dignified personages who have met with Lincoln, include poet and Lincoln biographer, Carl Sandburg, President Herbert Hoover, who would not say he had seen Lincoln’s ghost, but admitted to hearing unexplained noises in the corridors, Theodore Roosevelt, who admitted seeing Lincoln in different rooms and in the halls, Harry S. Truman, Dwight D. Eisenhower and Jacqueline Kennedy. (8)

His most active period was during World War II. Queen Wilhelmina of the Netherlands, who had taken refuge at the White House to escape the Nazi reign, claimed to have seen Lincoln after answering a knock at her door. Winston Churchill told a story of emerging from his bath and smoking his cigar, to find Lincoln standing by the fireplace. (9) Eleanor Roosevelt was not at all surprised by the assertions. Her staff had repeatedly told her of Lincoln visitations and she confided she often felt him “standing beside her, peering over her shoulder” and that she had often heard his footsteps in the second- floor hallway.

The White House isn’t the only place on Capitol Hill to report hauntings. Congress has not been able to wash away a bloody deed that occurred on the Capitol Building’s steps. In 1887, Congressman, Preston Taulbee, found himself the target of Louisville Times reporter, Charles Kincaid, who wrote an article on Taulbee’s less than honorable affairs with a young female clerk. By 1890, the story had been grossly exaggerated, and Taulbee’s personal character brought into question. On February 28 of that year, Taulbee noticed Kincaid standing near the stairway of the House Restaurant, and made a lunge for him,pulling his ear. Kincaid reached for his gun and shot the Congressman, who died eleven days later of his wounds. During the trial, Kincaid claimed self-defense and was acquitted.

Apparently, Taulbee was not satisfied with the verdict. To this day, there are bloodstains on the stairway where he had been shot, and according to staffers and guards, a ghostly visitor who wanders up and down the stairs searching for Kincaid and demanding vengeance. (10)

The most popular ghost story is of the Demon Cat, probably because of the physical evidence. Lurking within the Capitol Building, the haunted cat left some pawprints in the concrete. Stories of the cat go back at least a century. In the original tale, a guard saw the black cat approaching, but as it crept closer, it became larger and larger until it became the size of a tiger. Alarmed, the guard tripped and fell, but when he recovered, the cat had disappeared. Later stories attribute the cat’s appearances to national tragedies and presidential transitions. (11)

Wounded Civil War soldiers wander through Statutory Hall, their shadows flickering over the statues. A clerk named John Lenthall, cursed the building with his dying breath when an arch in the  room he was working on collapsed in what is now called “The Old Supreme Court”. John Quincy Adams can be heard shouting “no” in the Speaker’s Chamber. (12)

Ghost sightings are abundant in the hotels and houses of Washington D.C., with their individual stories of wrongful death, displacement and heartbreak, but none are quite so amazing as the prestigious assembly that occupy the White House and the Capitol Building. Comprised primarily of presidents and their wives, they have visited some of the most prominent and influential people in the world. Is it possible these spirits had invested so much of their lives to natural liberties, they feel obligated to continue swaying the course of history toward greater equality? Perhaps, they wish to preserve our freedom, or perhaps they wish to remind us of our roots; a broad mix of farmers and aristocrats, strapping pioneers, plainspoken heroes and strong, Revolutionary women, providing a backbone to their union. Whatever their reasons, it feels comforting to know that in times of national crisis, our forefathers are in the background, whispering advice.