I was sweating profusely, baking inside an Ice King costume, surrounded by walls of women all shapes and sizes with barely any room to dance. We were all on slow boil, dripping in heat, playing with balloons, and yelling out lyrics to songs we vaguely remember. This is sibling love.

Experiencing a Supernatural convention, as only a casual viewer and not a Sam-Dean superfan, is an amazing experience. Instantly, you are welcomed into a subculture of instant love, acceptance and comfort.

I watched as strangers bonded over their love of all things spooky, funny and well, AWKWARD. That’s what really makes this particular fandom fascinating is their enthusiastic embrace of awkward people, awkward energy and all those divided niches that don’t really have a culture to call their own.

We even bonded with a married couple who let us stay in their hotel room one night, as we talked about movies, TV shows, pets, and of course, “how much fun it is to meet other cool people that you can talk to.”

Whereas male-centric shows like Baywatch united the boys with the lowest common denominator, the largely female-centric Supernatural aspires to meld together philosophy, lore, urban legends, religion and a love of cheesy horror movies. It’s a celebration of emotion, some positive, and much of it negative.

Whether it’s the horrific screams of dying victims, or the depressing pathos of psychologically tortured heroes Dean and Sam, or even the fact that dying monsters have feelings and honor too, there are as many emotionally devastating scenes in the show as there are cheap laughs.

This strange mix of comedy and traditional cinematic horror has attracted a very unique fan base, one where appearances hardly matter but heart means everything. No surprise then that fans go to pieces when they trade buttons, or necklaces, or original artwork, or pose in their custom made costumes, or just wiggle each other’s hands in excitement realizing that they made it here—they’ve driven over 50 miles to be a part of this beautiful human experience and make a host of cool new friends. (And yes, many people were quite intent to tell you how many miles they traveled) 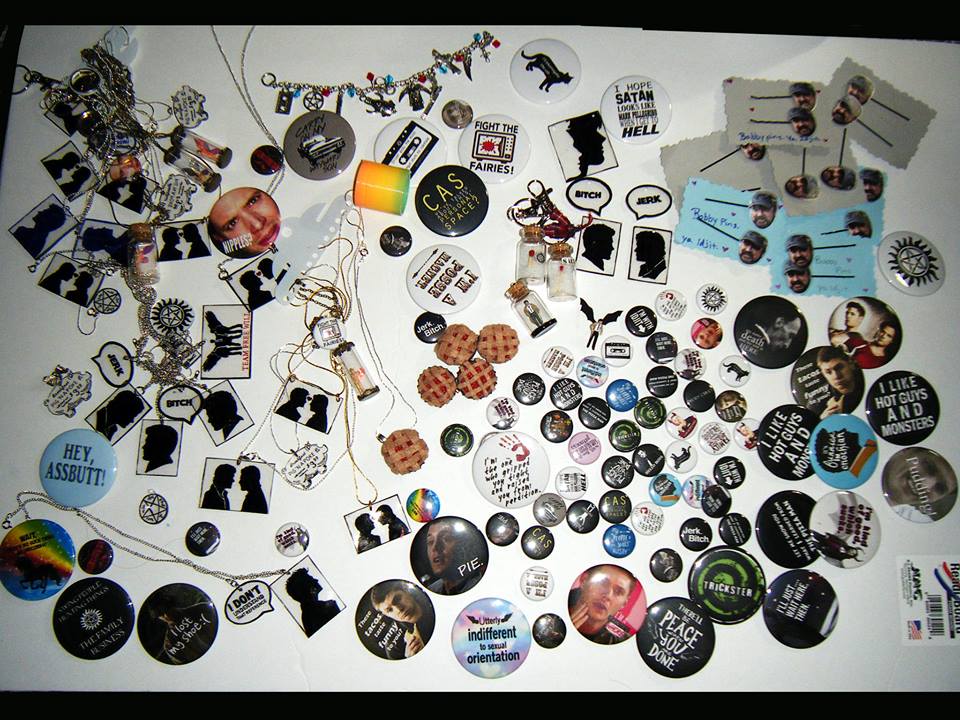 While there is some sense of camaraderie at every comic book convention, much of those events are characterized by catty competitions and a general sense of distrust – you know for everything EXCEPT your favorite cartoon or anime show.

But with Supernatural, one gets the feeling that the culture is much more open minded and heart-on-your-sleeve trusting than other fandoms. No wonder then that women burst into tears when meeting their idols. No wonder then that during the Q&A sessions even with the supporting cast, women cry and choke up and struggle to compose themselves. They call these actors their personal heroes, their life coaches and their “everything”. The auditorium falls respectfully silent when someone chokes up right before she asks a rehearsed question. Remarkably, the audience grieves with the girl who is speaking. No laughter, no hissing or heckling. Just mutual respect for their shared pathos. 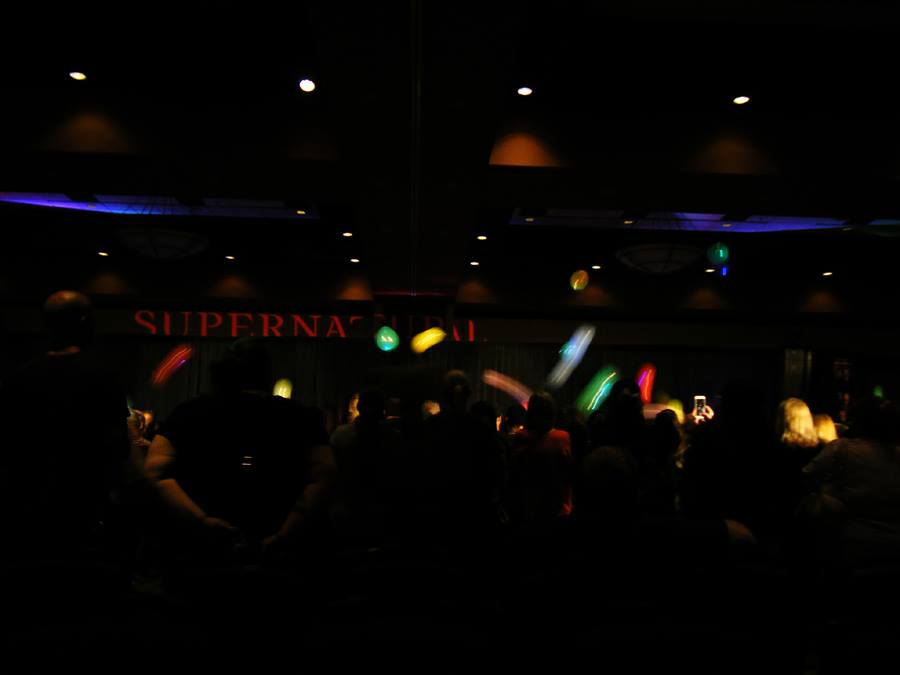 This is not just costuming fun and fan gushing enjoyment –this is a major life milestone for many of these people. That they had the guts to attend, that they summoned inner strength so that they could dress up and simply be themselves, was a testament to how much they wanted to live, to fight, to keep embracing life itself.

It’s no coincidence that much of the fandom – which was decidedly female, about 95 percent – was queer, gender neutral, chubby, middle aged, shy, awkward, or otherwise non-traditional in perfect masculine/feminine appearances. Very few were here to show off their perfect figures, but everyone was here to express themselves. 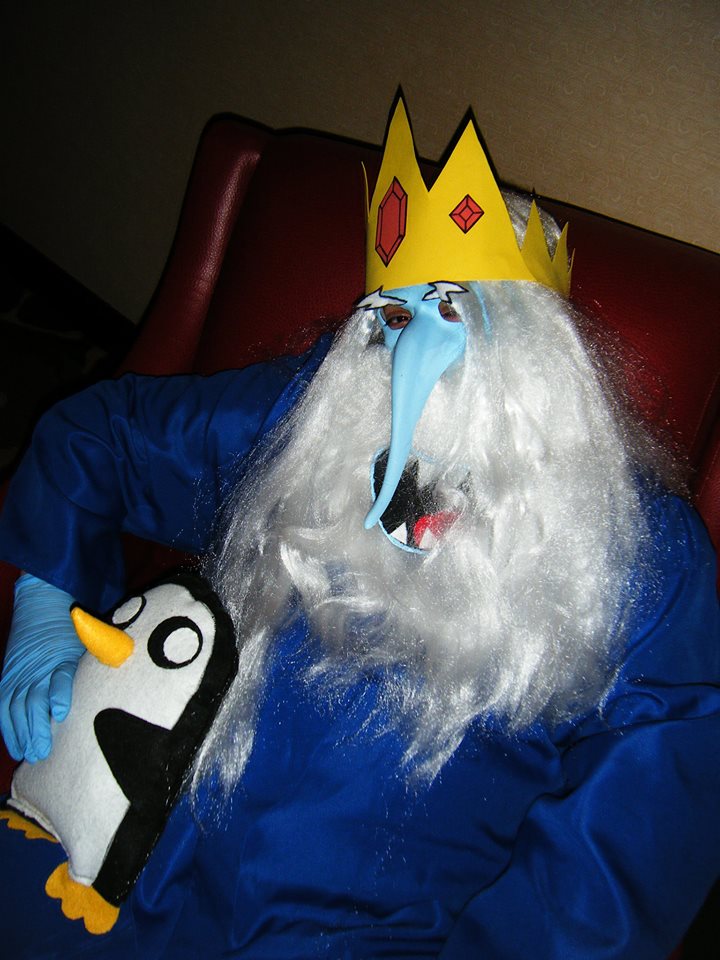 The awkwardness of the event was part of its charm. Whether it was Mark Pellegrino (Lucifer) explaining his atheism to a largely theistic crowd, or girls asking silly questions of their favorite stars that really had no answer, or actor Misha Collins taking shots at Donald Trump and speculating whether he should run for president, awkward silence was the theme of this event. 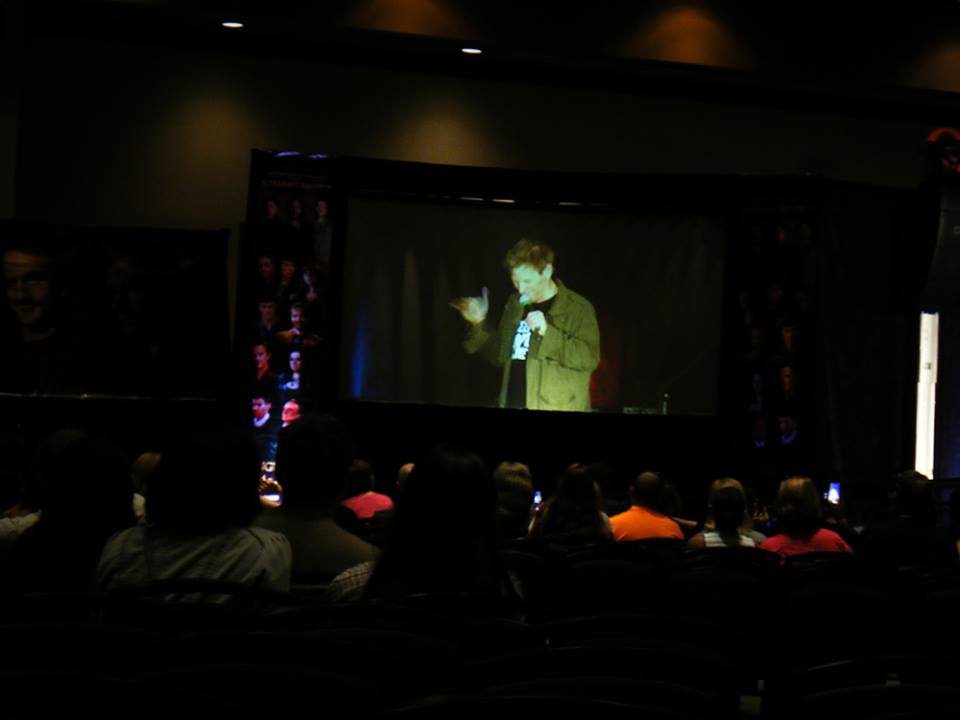 The show itself, devised by Eric Kripke, created this unusual atmosphere in which awkward encounters thrived and eventually led characters to moments of great self-discovery (or in some cases, horrible death). It’s not surprising then that the awkward energy the show created and distorted for entertainment purposes, actually evolved into a very real and deeply emotional awkwardness that has the capacity to be really sweet and really scary at the same time.

This was evident from witnessing Misha Collins doing a Q&A panel. He was visibly disheveled and almost uncomfortably nervous during the session as well as the preceding photo shoot. Very out of character for the experienced thespian who usually loves interacting with the crowd.

Word from the hallway, as we stood in line waiting for photos, was that Misha had thrilled the girls with an impromptu Walk-On, leaving the secure photo area for the public men’s restroom. Girls screamed and everyone loved the spontaneity of seeing Misha mingle with his fans. Unfortunately, or so the rumors suggested, Misha was then verbally assaulted by someone in the restroom. Hopefully, it was just a verbal poke, though perhaps ANY form of harassment was also possible considering Misha’s popularity, his huge and obsessive fan base, and the awkward energy of the whole event.

When one creates a following of awkward personalities and socially stunted communicators, strange and perhaps intimidating encounters are bound to happen.

I dismissed it all as hearsay, that is, until Misha Collins, admitted in the Q&A that someone in the restroom took a photo of him while he was urinating. 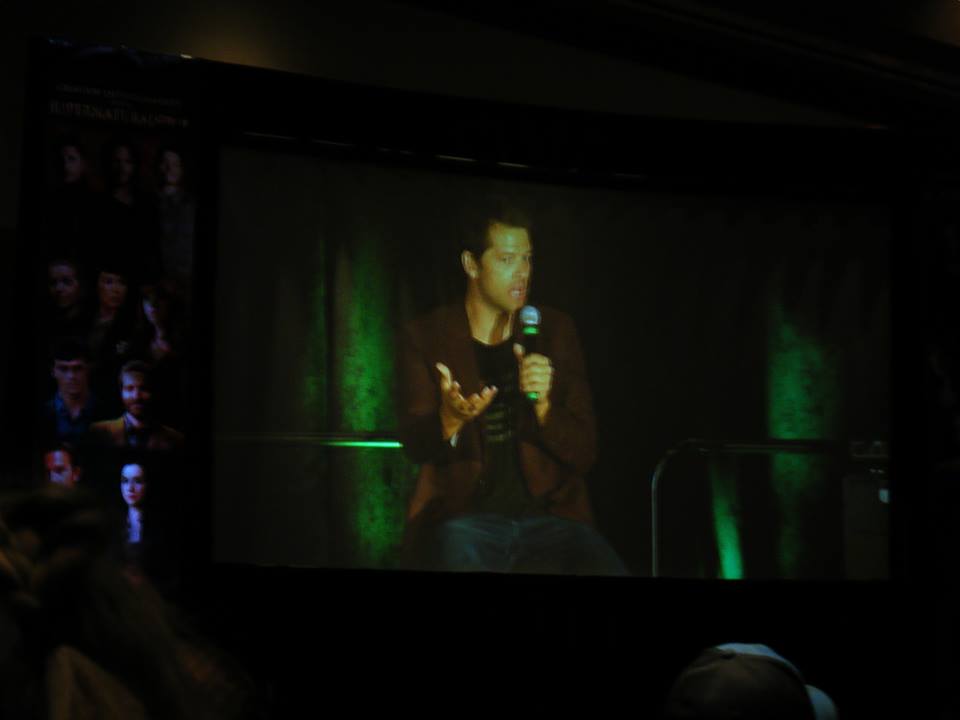 After laughing about the situation, as is good therapy, Collins admitted meekly that sometimes he “doesn’t know how to deal” with the show’s popularity and the cult following Misha/Castiel has started. He tries his best to launch events like GISHWHES in an effort to give the fans something back. He tries really hard to keep things fun and capricious, letting his reputation for wild antics build.

And then of course, restroom, photo, while urinating.

It was one of those all-too-rare moments when I actually felt sympathy for Hollywood actors. How do you respond to abuse, to harassment, or awkward jokes that feel more threatening than funny?

How do you do so, without literally scourging these delicate human beings who worship you and cling to your every word? 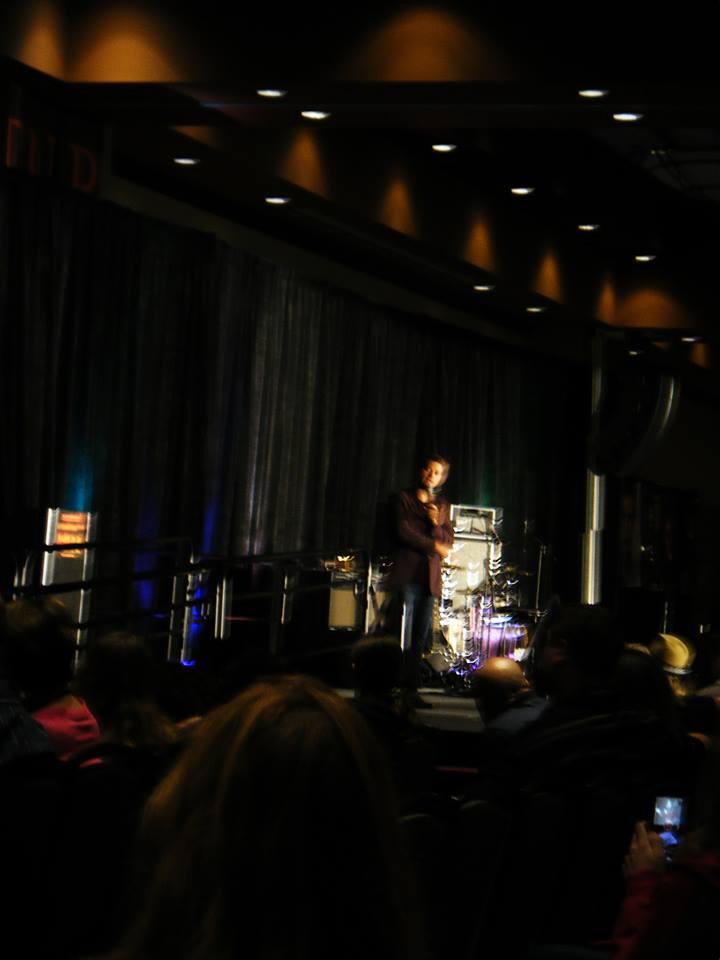 What may be at the heart of this issue is that Supernatural’s popularity – now in its 14th season – has virtually evolved into a surrogate religion for followers who have nothing left to believe in, beside abstracts. The show certainly has the numbers to compete against Scientology and the complicated mythos to compete with much bigger religions, including a healthy dose of cynicism and self-awareness that Christianity, Judaism and Islam lack.

“What can we do to make our lives better and make a difference in the world?” one fan asked Misha Collins. 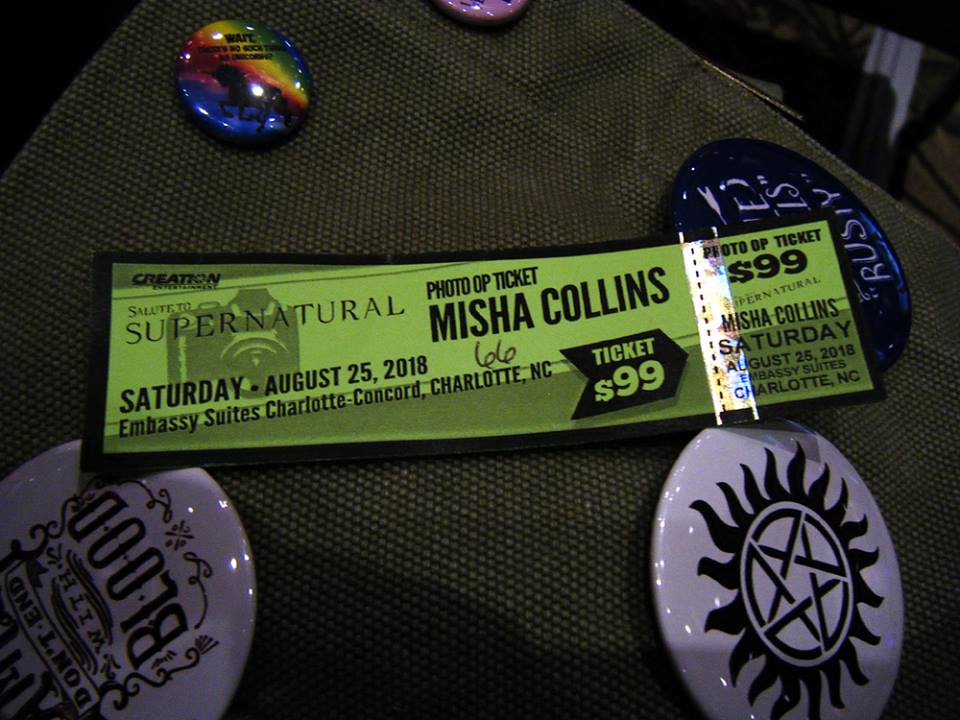 There was no clear answer given, and perhaps the show has never really delved that deeply into answering all these existential questions for its adoring and anxiety-ridden fans. At the end of the day, the show was created to make money. But what it created by accident were millions of adherents who desperately wanted answers – especially since the show so perfectly mirrored their pain, isolation and suffering.

No wonder lead actor Jared Padalecki had the foresight to study his fans and understand their needs beyond entertainment and celebrity worship. He developed the mantra “Always keep fighting” as a life mission for these outliers and outcasts who needed another reason to live—even beyond when the show ends.

If anything, Supernatural in the Carolinas showed me that people are eager to feel, eager to worship, and eager to learn esoteric truths, whether in fiction or in that special nonfiction that feels like fiction, otherwise known as religion.

It should be an inspiration to aspiring artists, writers and musicians everywhere. There is an audience out there…if only you keep fighting, or trying, or you know, hunting stories, saving ideas, the family business.

It’s the lesson I learned as I struggled to maneuver stampedes of women lining up for photo ops and filling the hallways with wall to wall bodies. There were no conferences or workshops – just the stars, just mingling with other fans. I felt like Simba in The Lion King during the wildebeest scene, but with no Mufasa to protect me. It was heart-warming to know that people really do care that much if only you can find your audience and connect whole-heartedly, nothing to hide, no time to waste.

Then the thought occurred to me: you spend your whole life chasing fame…until you find it and then spend the rest of your life trying to survive it. 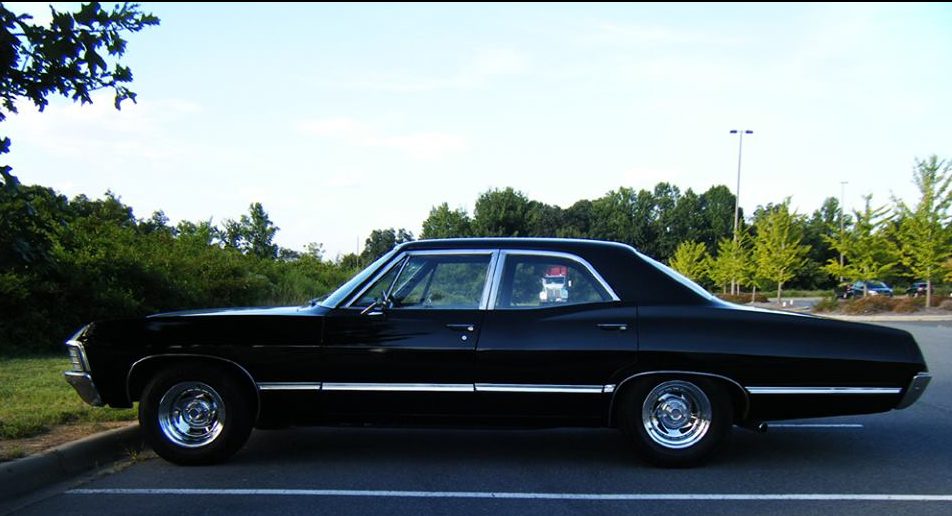 L. M. Warren is a freelance writer, humorist & part-time Disney Princess. His book series “The End of the Magical Kingdom” is classified as a Tragic Parody, combining comedy, tragedy, fantasy and psychological horror. Why not Google it sometime?

2 thoughts on “A Review of the Supernatural Convention in Concord, North Carolina”