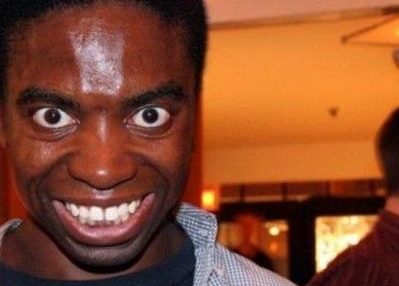 Apparently Social Justice Warriors have a problem with #EyeRape.

Defined as when a man stares at a woman in a non-platonic way, and when the guy is not hot like #JamieDornan, eyerape is a blatant form of sexual harassment, one suggesting a rapey power trip that makes women feel violated.

However, there’s one problem with treating eyerape as a legitimate form of sexual harassment—it’s an inherently racist invention, created by white women who want to justify their disinterest in Black men, Latinos, Muslims and any other man who doesn’t have a face that meets their minimum standard of beauty.

Not only is it a racist institution, it’s also one that celebrates vanity—as in only a man of exceptional genetic gifts should be allowed to look at a woman for longer than one second. Beyond that, he is forcing her to interact with him, as a person, when in fact he is an ugly second class citizen not worthy of a conversation.

Never mind the fact that ogling, smiling and ”vicious eyes” are relative, and difficult to evaluate within a few seconds. Can we really say that we can discern a person’s true motives when they are staring at us?

Who’s to say that one man’s smile is not platonic, or even non-sexual? Perhaps the accused pervert is trying to determine if he recognizes the woman, or is gauging whether or not she’s actually attractive to him and thus worthy of his full attention.

It may be difficult for some men to ascertain whether a passing woman is actually beautiful, or if she’s just blown so much makeup and hairstyling, and is so proudly showcasing her boobs, that she’s giving off a false pheromone signal.

“Ohh wait, your disinterest in me indicates you don’t want me to hit on you. You just want to feel empowered and sexy by wearing that sexy dress. Sorry, my bad. I thought that your clothing was about me, not about you. Okay, cool so I will refrain from sending out my mating signals to you any longer.”

So is the man actually leering at her face and or body, or is he simply confused at the pheromone signal and trying to determine whether or NOT he should pursue her?

Perhaps an “eye confrontation”, however uncomfortable at first, is actually a protection for the woman. If a man stares at her for a few seconds and does NOT get back any receptive signals, he will get the message loud and clear (“I’m not interested”) and will leave her alone.

If he continues to harass and pursue her, then he is revealing himself 100 percent as a harasser of women, and regardless of color. He deserves to be shamed, maced, shot, and pissed on, as far as I’m concerned.

But what we should be teaching men is the obligation to leave a woman alone once she shows disinterest, and NOT to shame them simply for looking and making a move.

If every man would STOP at dramatic eye confrontation, (aka the “eyerape”) and NOT keep pursuing women who put out “NO!” signals, there’s no question society would be better for it.

Dramatic eye confrontation is only “eyerape” when it is followed up by aggressive sexual bullying, forced dating, or similarly coercive methods. Eyerape is eyerape when it is used as a tactic BY RAPISTS.

Of course, the racist Social Justice Warrior response would be that men should never stare at, approach, or engage with women unless their exceptional good looks and social proof precedes them. For example, “It’s OK to eyerape me if you’re Dwayne Johnson or Channing Tatum. Otherwise, just don’t talk to me, you ugly, disgusting freak.”

Such an attitude smells like only one thing: closeted racism and bigotry of lesser fortunate men—usually poverty stricken men, who only know how to pursue women in one way: by flirting and not by bragging about their money or fame. Because how else does a man show interest in a woman if not by making eye contact?

Some uncomfortable eye tension may also come from the simple fact that different cultures have different ways of communicating feelings through eyes, mouths, facial movements and other body language.

A Black or Hispanic man may not smile at you the same way as a white man—especially if the white man has more dating experience with white women and has been exposed to mainstream and wealthy United States culture more so than minorities who haven’t had the same opportunities. Muslim immigrants may not understand the subtle nuances that white women usually require from their suitors.

What you perceive as a black man eyeraping you, may actually just be a black man giving you what he thinks is a “friendly, flirty look.”

That you immediately dismiss his stare as attempted rape is as racist an attitude as I’ve ever encountered.

Yes, it’s sad how many men today have no idea how to flirt and who resort to autistic rage episodes just to get a woman’s attention. Or, who stare at a woman’s bosom for seconds on in, proving his “powerful heterosexual desire” (as dating coaches call it) and hoping that he’ll think of some funny Joey Tribbiani-esque thing to say (which never happens).

There is only so much forgiveness that Muslim men, Latino men, Asian men and African men can ask for, when it comes to being disrespected by white women and equated with rapists just because they dare to look.

Jerry Seinfeld and George Constanza said it best. “There was cleavage in the area so we look. We’re like some kind of weird fish where the eyes operate independently of the head.”

If you’re serious about making eyerape a thing, then start holding good looking white movie stars accountable when they make intense, Christian Grey-esque eye contact with you. Is the only reason you don’t mind when they do it, is because they’re rich, handsome and white?

I for one know I can’t even count how many times Kevin Spacey eyeraped me on that godawful show, “House of Cards.”

Lastly, I have to wonder: if you give me a look that says, “Oh stop eyeraping me!” am I allowed to give you a rebuttal look that says, “I resent that implication and am eye-suing you for defamation of facial character”?

What you perceive as a black man eyeraping you, may actually just be a black man giving you what he thinks is a “friendly, flirty look.” That you immediately dismiss his stare as attempted rape is as racist an attitude as they come.