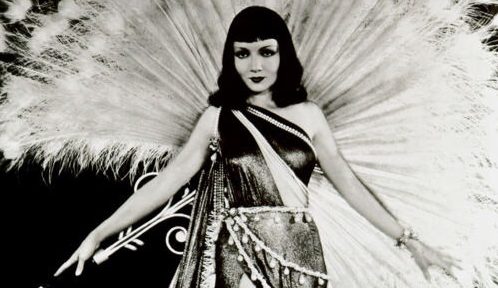 A little over a hundred years ago, men with cameras set about to create moving pictures.  By the 1890’s, they were doing so, with various degrees of success. Early films never lasted more than fifteen minutes, but they immediately ignited imaginations as to their full potential.  “A Trip to the Moon” made in 1902, became immediate classic entertainment, and continues to feed the aficionados of classic movies.

The first non-commercial attempt to make a moving picture was “The Photo-Drama of Creation”.  Produced by “The Watch Tower” and The Tract Society of Pennsylvania, the 1914 presentation combined slides and synchronized a motion picture with audio.

Film making was quickly introduced to provide documentaries and promote political goals, but the box office hits were the ones that showed a great deal of nudity.  Those naughty nineties were no exaggeration.  This blissful era of nude women, profanities and rapacious villains continued well into the 1920’s, several years after audio and visual had been synchronized and the standard length movies we view today began taking form.

The Hays Code  was never a strict rule.  It was an agreement among the motion picture industry that as a medium that incites all the senses, it was their moral obligation to set guidelines for acceptable entertainment.  Its arrival in the 1930’s was rather awkward, considering the dynamics of the time.  It championed an unquestioning faith in law during the Great Depression when poverty and crime were sweeping over the US and labor unions were forming. 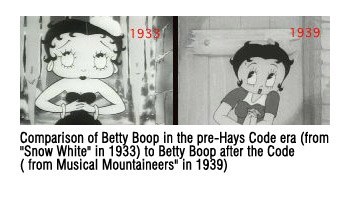 It also urged a complete neutrality toward other governments in movies that included foreign countries in their depiction.  This became increasingly more painful as a series of movie plots were rejected during the early years of Hitler’s rise to power.  It took a Three Stooges farce, “You Nazty Spy” to crack the barrier and create films that openly opposed Nazi Germany.

From Roses to Thorns

Movies were a nice escape for the 1950’s American population that wanted to forget they had just been through two world wars and an epic depression.  Middle-class people with middle class values tasting drama and fantasy through a screen, with hopeful messages and happy endings. Those were star-studded days with dazzling performers, brilliant smiles, noble heroes and tear-filled heroines.  The box office hits followed the Hays Code and everyone was happy.

Until the 1960’s.  The nineteen-sixties were bold years, with a questioning youth experimenting with every aspect of social life.  They were years of rebellion.  They were years of facing racial and political issues head on.  They were the years of the sexual revolution.  Movie makers began stepping outside the boundaries of the Hays Code as they began producing films that questioned the morality of racism and war.  The 1960 movies explored the drug culture, alternative life styles and human sexuality.

What began as a trickle became a trend.  The Hays Code flew through the window for aspiring film makers wanting to produce a cutting edge movie.  Nudity, sex and violence became such a casual part of a plot line that no choice was left but to give individual movie ratings from G for general audiences to M for scenes that showed adult content.

Those were the last glorious days, with box office hits pulling in millions during their opening weeks. Then, by the turn of the 21st. Century, the kingdom of Hollywood began to crumble.

Much of the blame was placed on videos; with tapes and DVD’s to bring the movies home to the television set.  But something else was happening to its veneer.  For the first time, viewers were able to make comments on a social media platform.  Hollywood’s critics no longer mattered.  Artistic merit no longer mattered.  What was important was that the movies met viewer approval.

What appears to be the most practical solution isn’t always the best solution.  Dominating social media sites with alarming vigilance are the troops driving the morality crowd.  These troops often fly under different banners.  Typically they will claim Christian values, concern for minority and LGBT rights, protest women as victims, or other perfectly noble and legitimate cause, but their fundamental message seems to be the same.  Hate those who oppose us.

The old adage that the squeaky wheel is the one that receives the grease, but it’s also true that the squeaky wheel defines the group.  Women who once proudly said they are independent and liberated, now wince when they see themselves grouped with feminist extremists.  Political correctness served its purpose in a time period when people were just becoming aware of racial inequality and struggled to gain a multi-racial perspective.  It lost its purpose when it became a means of distracting people from real issues by arguing over vocabulary or the context in which it was used.  We now tip-toe between word choices and keep our fingers crossed that they’re still appropriate.  In the same manner, the thunderous voices of Moral America has taken a battering ram to movie ratings.

The Internet is essentially creating the new Hayes Code.  Once proud Hollywood now sits in a pastel dress, hands folded primly in the lap, asking such astute questions as “how should I define your sexual identity?”  She is fearful of offending anybody, and especially those who speak in loud, shrill voices, denoting complete authority on the subject in question.

It’s okay to throw Rotten Tomatoes at a film’s production.  Often it will survive, even with a little negative publicity, but a film that offends the jellyfish sensitivity of political correctness is dead in the water.  Political correctness; the polite way of saying you understand there are plenty of people who don’t have the same advantages as you but you’re trying your best to pretend it isn’t true.

Hollywood’s pastel code includes a minority ratio among the main characters, a homogenous life style that shows no cultural or ethnic differences and empowered women who never have to stand up to adversity for long.  A Utopian fantasy that’s rather far removed from reality.

The safe zone for box office hits in recent years have fallen primarily into the category of science fiction and comic book heroes.  There, movies can be made with a general or PG13 rating that will rake in audiences of all ages.  They can mix the races, mix the sexes, throw in a few aliens and mutate to their hearts’ delight.  As long as there was no explicit sex or bloodshed splattered all over the screen, the movie was safe.  Or it was for a while.

Recent movies have come into question for objectifying women.  Apparently the same spandex costume that defines a superhero, makes women appear too sexy.  This same objection was made of female video game characters, although oddly, there’s been hardly a murmur from these warriors concerning female objectification in advertising.

William Shatner stirred up the Social Justice kettle recently by announcing he was not a fan of their warriors.  When they indignantly tried to compare their campaign to the civil rights movement of the 1960’s, he disagreed.  During a furious Twitter war, the first white man to kiss a black woman on television said, “They (the Social Justice Warriors) have no comprehension of the stark difference between valid causes and manufactured grievances.”

In the Belly of the Beast

The same instrument that brought us censorship on a mass scale from the avengers of all words careless or poorly constructed and all thoughts not dedicated to a bland, humorless society, has also brought us the alternative to box office hits.  The Internet has been busy offering up movies and series that can be viewed directly from the television.  Netflix and Hulu lead the charge, with made for television series far more controversial than anything traditional movie producers have to offer.

The viewer is safe from the prying eyes of censorship in the privacy of home, choosing from an enormous variety of offers.  Dark humor, light comedies, gripping drama, comic book heroes, international movies and shows, all feeding the craving for entertainment without sugar coated censorship.

You Don’t have to be White to be Right

True social justice warriors are needed in the movie industry.  Hollywood’s lackluster productions are the result of tunnel vision.  They see percentages and the need to fill a quota.  They do not see the dynamics of individual personalities.  They do not see beyond stereotypical roles and a delicate, pastel ideology.

There is a need for bringing true cultural identity to the big screen and to recognize its artistic merit.

There is still a disproportionate representation of minorities within environment.  Technically, if a movie was to be made in San Francisco or L.A., nearly half the cast should be Latin American to be statistically accurate.  Likewise for movies made in Alaska or Hawaii, where over a third are a minority population.

Even in movies with a substantial minority population, the white guy is always the hero.  This is undermining minority cultures who have their own stories to tell, without the white guy necessarily being the one on top.

Life in a Brighter Color

Pastels serve their purpose.  The light hues rarely feel upsetting.  They’re easy to mix and match, but they can also be set off wonderfully by a darker or brighter color.  It’s fortunate really, that the vast number of Netflix viewers shut off the shrill voices that claim to represent them.  The silent majority, snuggled down with their favorite movies, out of the clutches of the censor brigade, are what keep us open to choices in entertainment.

If Hollywood really wishes to pursue the rigid formula of the 1950’s, perhaps it should take its example from the glitz and glamour of sparkling sequins and boa feathers and the big bill performers who knew how to dance, sing and act.  They should ring out with the sparkle of the old classic stage people, like Bing Crosby, Dean Martin and Danny Kaye.  They should make their movies an extravaganza of light, show and romance.  It won’t be very realistic, but at least it will be entertaining.