It seems so obvious—the answer to reducing gun violence in America is to restrict easy sales of firearms and the absolute freedom of citizens to possess firearms, made possible by the Second Amendment. Statistically speaking, territories in which gun control is heavily restricted seem to report fewer incidences of gun violence.

Obviously, when an irrationally thinking person does not have the option of resorting to gun bullying, he or she is less likely to commit an act of violence. Without a weapon, the perpetrator must make use of his body or a sharp blade, or a vehicle—alternative sources of deadly force that are not as conducive to emotional violence as a firearm.

While a series of recent terrorist attacks have made headlines which involved driving vehicles into crowds, those who advocate tighter gun control laws still claim that these instances are sporadic and not as predictable as gun violence. Gun violence, they claim, made possible by free ownership rights to possess firearms, conceal them, or open-carry them in public places.

The problem with this line of thinking is that several assumptions are made:

Unfortunately for gun control proponents, the entire argument of amending the constitution is based on ignorance of the law and a certain obliviousness to the plight of the poor.

According to one statistic, just over 18 million Americans of all ages participate in the martial arts, which is just over 6 percent of the population. A very small minority, in face of the growing threat of patriotically or sadistically motivated violence. Blacks are more likely than whites or Asians to engage in martial arts, and not surprisingly, given the necessity of self-defense in poverty-stricken areas. Historically and presently, African-Americans are disadvantaged and still have the highest poverty rate at 27.4 percent. Those who face poverty every day are always more likely to be confronted with violence – the desperate language of starvation.

Statistically, NRA supporters continue to debate with pro-gun control liberals and each provides their own self-serving reports. Gun owners claim 2.5 million instances a year in which guns are used in self-defense, including 200,000 women who use firearms to defend against rape. They also point to statistics showing that private citizens shoot or kill more criminals than police do, with an “error rate” (innocent civilian shootings) measuring 2 percent for gun owners and 11 percent for police officials.

The gun control crowd claims that 359 “justifiable homicides” contrast 232,000 cases of stolen firearms, many of which happen during burglaries.

In essence, they argue that police officials and military forces are more qualified to protect private citizens—in addition to whatever Kung-Fu or Karate they know.

Police Are Not Obligated to Protect You

This is in line with what the case of Warren vs. District of Columbia established in 1981, namely that the police cannot be held criminally or civilly liable for whatever violence happens to citizens because of their negligence or lack of interest in preserving peace.

Quite graphically, this case showed that even if your home is invaded and you are threatened with rape, you cannot depend on law enforcement to protect you, nor is any pain and suffering compensation available to you because of any blind faith you had in the myth of police protection.

Want more support for gun control? Why not put pressure on the federal government to make one simple change? Make the police obligated to protect private citizens in the event of violence. 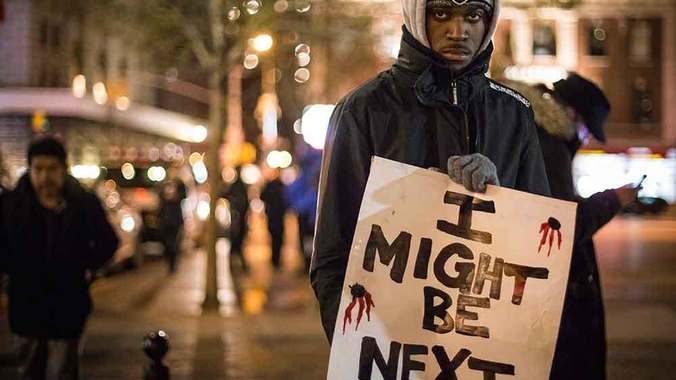 Make the police obligated to protect private citizens in the event of violence. They are not obligated and so have nothing to lose in such cases, as well as cases like Terence Crutcher and Philando Castile, where police were given the benefit of the doubt even in lieu of physical evidence, since they were not obligated to preserve innocent black life—just to fulfill their duty to the state. Yes, a police officer shot an innocent black man and was acquitted. It happens every day and it does not concern the gun control debate whatsoever, at least as far as the rights of private citizens go.

But the poor are the first who would be executive ordered to give up their concealed weapons and privately owned ammunition.

Studies show there is a clear link between poverty and mental illness, though the real issue at hand is not schizophrenia or raging psychosis. It’s the government’s right to determine who is mentally competent to own a firearm.

Suspected terrorists, who the U.S. government routinely jails or murders overseas without accountability, would be disqualified from defending themselves. The mentally ill category would eventually encompass all those whom the psychiatric community would deem a risk to their own safety, including the chronically depressed, the suicidal (who apparently don’t deserve the right to die, by our pious standards), the bipolar, the alcoholic, and those dealing with rage.

Unfortunately, such stringent laws would still not bar sociopaths from owning a gun OR from taking office (in the case of everyone we loathe and love to criticize, from Trump to Obama and Clinton). Those who completely lack empathy are not considered “mentally insane” or unfit to manage great power and weapons with deadly force. Only the “Weak” not the “Strong”. And the Delusional.

The government would scrutinize people who say strange or unnerving things on social media, thereby justifying the government’s rights to invade privacy and use statements made by civilians out of context and in evidence against them, which is fundamentally opposed to the Fifth Amendment.

Your Life Must Be “At Least This Valuable” to Defend Yourself

Not only are automatic weapons already barred, putting a homeowner at a severe disadvantage when confronted by police, but the background check issue is already ridiculously underreported.

Few people seem to understand the government already requires the screening of most gun buyers, discriminating against felons, whether they were guilty of a crime or even wrongfully accused. We’ve already decided, quite arbitrarily, that those who make a mistake early in life (or who are blamed for the crimes of someone else) can never again qualify for basic home protection.

We’ve already decided that the life of a felon is worthless. If blacklisted criminals are to defend themselves at all, they must buy weapons on the deep web, or through local trading venues—their last resort and the one alternative to becoming a sitting duck in an increasingly violent country.

We are therefore encouraging our felon population to break the law just to defend themselves with firearms, which not so coincidentally promotes the racist for-prison profit system that both Democrats and Republicans embrace.

But perhaps proud, white rich society hope that poor Blacks and Latinos will learn martial arts to defend themselves. Of course, a felon who uses any kind of violence, whether in self-defense or not, appears suspicious to police. Repeat offenders are practically invented by our insatiable police state.

Realistically speaking, major gun control reform would result in mostly sanctions against the black community, against other minorities, and against those whom the state views as potentially anti-government.

That means practically everyone who isn’t rich, voting for one of the two big parties, or who suffers from economic hardship. Gun control is ultimately a plan to oppress the poor population, while celebrities, government officials, and wealthy citizens are given free reign to own and pass background checks from other privileged-class psychiatrists.

Gun control proponents suggest anyone that owns a firearm should not only be placed in an unconstitutional and racist database (since once again, Blacks and Latinos are the most poverty-stricken Americans) but that they should be forced to pay insurance—which does nothing except to put more money in the pockets of insurance companies, the BFFs of both Democrats and Republicans.

Ultimately, what is at stake in the great gun control debate are the rights of poor people to defend themselves and live or die on their own terms. Without the freedom to own guns, they are completely vulnerable to home invasion, mugging, rape, terrorist acts, and yes, other lone gunmen whose best strategy has always been to hit a “gun free zone” and get a jumpstart on the police.

To suggest that only a “minority” of U.S. citizens are murdered or raped every year, thereby invalidating the argument, is insulting—and all the more so, when you realize these are mostly minorities being violently harassed. Does a minority of Black and Latino victims not disturb White America enough to question the logic of gun control?

In addition to the threat of terrorists, foreign or domestic, angry Democratic or Republican protesters, and that of sociopathic murderers walking the streets, private citizens must contend with the growing problem of trigger-happy police.

We have already seen evidence that announcing you have a gun is not enough to stop police violence. Giving up one’s gun is likewise not enough to prevent police brutality from happening. The only defense you have is to be white…and that’s not acceptable to a minority citizen who knows this life is all there is and that they do not want to die at someone else’s command.

In this case, the citizen should be allowed to shoot first and stay alive when confronted by a threat. Definitely in his/her own home and even in public locations.

But Gun Control is Primarily Aimed at Concealed Firearms!

The one point gun control enthusiasts do have is that tighter gun control laws will primarily stop citizens from taking firearms out in public, whether concealed carry or open carry. As long as one is allowed to defend his or her home, they should remain subject to the local laws of the land when traveling to public places.

This may be something we the libertarian / centrist / third party population can agree upon eventually, but with one caveat.

Being forced to disarm ourselves and surrender to the mythological “protection of police” would discourage introverted and borderline anti-social personalities like yours truly from going anywhere where political, religious or emotional bouts of violence might occur.

It would be a practical boycott against everything American except maybe Amazon, PayPal and a few of those home delivery services.

What we at Subversify are still confused about is whether gun control promoting liberals understand that a virtual boycott of most American institutions would follow their pro-State confiscation order, OR if they simply want most Americans to stay home, pay their bills, and stop going so many damned places all the time.

With Amazon’s acquisition of Whole Foods and the slaughter of the brick and mortar publishing industry, we’re starting to see the dawning of a new empire—the cyber globalist, who so congenially advises you to take a seat. And stay put for a while.