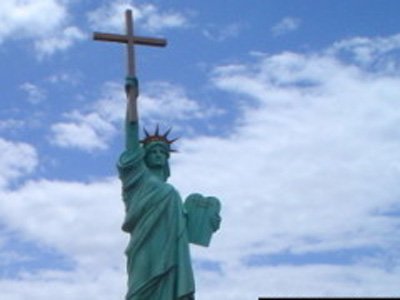 There Are No Christian Terrorists

Why are we so afraid to be objective in reporting the news? Some terrorists happen to be Muslim. Some lone gunmen and psycho murderers happen to be Christian. Some atheists commit horrible crimes.

A person’s religion is data, nothing more. It’s like saying, Stalin was NOT an atheist because he was a bad person and doesn’t reflect the values of atheism.

There’s a big difference between a company saying “This person was fired because they do not reflect our values” VS. “This person professed to be a Christian/Muslim/Atheist, whatever.”

You can profess to be anything you want and it doesn’t mean you’re exemplary.

Are we going to also say that Kim Davis was not a Christian because she brought out the most negative aspects of Christianity? Were the Evil Popes in the Dark Ages not real Christians – and thus can we say Christianity has no blood on its hands because those murderous fiends were not “real Christians”?

The point is, a person’s religion is just data, nothing more.

If a sociopathic Catholic murderer is excommunicated by the Church then what does he become? An Apostate Catholic, or you know, a Protestant Christian, an Anabaptist Christian. A SECT. A cult, an evolution of Christianity.

Were the Crusades not truly a Christian or Muslim war because they involved acts of war, terrorism, violence and cruelty which were not what Jesus or Mohammad preached? Then what the f*ck were they fighting about anyway?

Does a US Soldier cease to be a Christian when he goes overseas and murders innocent Iraqis because it wasn’t a very Christian thing to do?

When Gandhi said he “loved Christ but not Christians” was this a racist and Christianphobic thing to say, since Christians who took up arms and did terrible deeds instantly ceased to be Christian?

The media needs to stop treating the public like complete idiots. I know there are wonderful Muslims out there – by far the majority compared to the minority of terrorists.

Trying to suggest that people cease to become their professed religion just because you don’t appreciate how their life ended is ridiculous Corporate-Speak.

Hence, I can safely say loser Greeks are not really followers of Zeus.