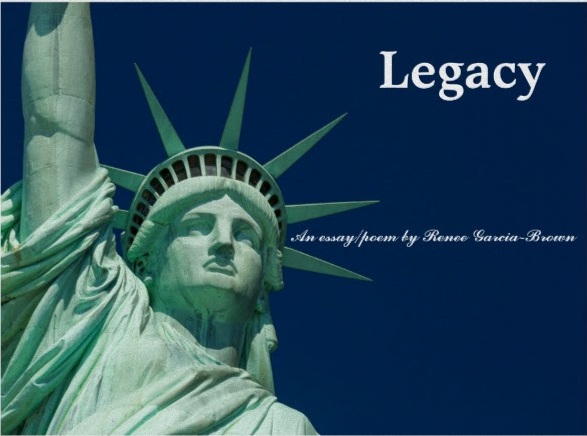 Someone I once admired parroted a man I never admired by saying:

“Immigrants don’t belong here, they get benefits from the government they don’t deserve, we should keep them out.”

I had told her my grandmother was an immigrant from Northern Ireland who came to America in 1920, a time when Catholics like her had no human rights because the boot of the British was on their backs.

She never became an American citizen and I never knew why. She received money from the federal government in her later years, hence my once-admired friend’s comment.

My grandmother married a man who served in the U.S. navy. Then my aunt was born, then my father, then my uncle.

In December 1941 they lived in Hawaii and on a Sunday morning bombs fell and my grandmother, aunt and father watched as thick black smoke rose from the harbor. They didn’t know if their husband and dad was alive or dead.

My grandfather only survived because his submarine wasn’t in port that morning.

In 1952 my father joined the air force and worked on planes that flew over Korea.

In 1980 I joined the army and was sent to West Germany because there was an East Germany and a Soviet Union and we kept the peace even with Reagan shooting his mouth off.

In 1988 my sister followed me and almost went to war in the desert’s storm.

In 2006 my nephew did as his grandfather had done but after being attacked in basic training his post-traumatic stress disorder precluded going to Iraq to get his PTSD.

My Father worked for 40 years making sure commercial airplanes were safe to fly and raised four daughters to be who they are, breaking all gender stereotypes.

The money my grandmother received from the government was part of my grandfather’s service pension.

And even though she died still a citizen of the U.K. how much does an immigrant have to give to be worthy of American soil?

Her husband served, her son served, her two granddaughters served and her great-grandson served. Would it be better if she never came here like my former friend and Trump prefer?

Or does she get a ‘pass’ because she was a white European?

My grandmother rests on a hill overlooking the port of Los Angeles where ships come in from around the world.

Now let me tell you of my mother who was born in Los Angeles to a father who was born in Mexico and a mother from New Mexico. She learned Spanish as her first language and when she went to public school she couldn’t speak English so the teacher put the ‘dunce cap’ on her head and encouraged the other children to ridicule her.

My mother has denied being Mexican-American all her life. In the age of Trump, she still does. But I have seen her birth certificate and I am proud to be an Irish-Mexican American. I embrace all sides of my heritage; white, brown, and red white and blue.

Latino heritage includes European and indigenous peoples so how far back does my family history in America go… farther back than the Drumpf family who changed their name to Trump.

I embrace my ‘Americaness’ because I am every American.

I am also a Californian. I am an Angeleno. And, Mr. President, I am HERE because my grandmother came from Ireland and my grandfather came from Mexico.

Renee Garcia-Brown is a veteran, a former newspaper reporter, author of poetry and fiction and a native of Los Angeles.