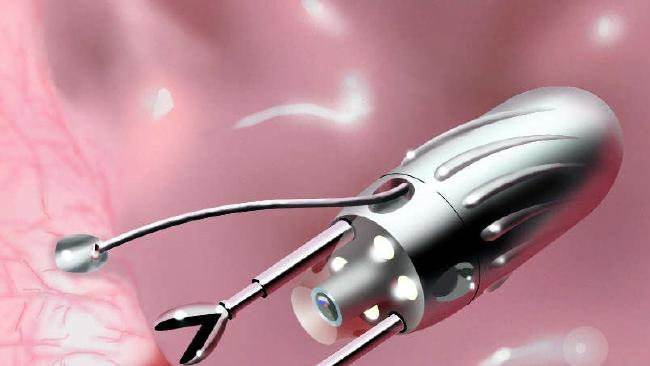 As with all things small, nanorobot technology has moved in with a whisper, not a bang.  Basic nano machines have already been introduced to a market that never really questions how their products work.  They just want results, and nanobot results are amazing.

Nano machines are used to make stain resistant fibers for clothing and in powders to formulate high-performance sun-screen lotions.  Nano particles assist in delivering drugs to targeted tissues within the body.  Nano applications have entered the field of sports, making lighter, stronger tennis rackets and golf clubs for better motion control and swimsuits that repel water and reduce friction, allowing the swimmer to swim faster.

Within the next two decades, Nanorobotics will set new standards in pharmaceuticals, cosmetics, aerospace and automotive industries, security, defense, environmental protection, electronics, computers and communications.  Within the next two decades, we may have tiny machines inside us, combatting every disease known to humankind and slowing down, even reversing the aging process, making us practically immortal.

In the field of technology, smaller is better.   The bundle of tubes and wiring that once powered a television, have been replaced by flat surface circuit boards with tiny, compact components.  The giant computers visualized in the 1950’s have shrunk down to hand-held devices.  Solar panels, once too cumbersome and expensive for any but the most high-tech homes, are now light-weight, manageable, and cost-effective.

With nanobots, you work from the ground up; or more accurately; from the atom up.  A nanobot can be literally of any material.  The tiny object is no larger than the scale of one hundred nanometers and constructed of molecular components.  The nanobot is programmed with specific information and can be used to enhance energy sources, attach to cells or tissue and provide medical information from its location.  Nanobots can work collectively to create larger objects.  A number of scientific disciplines merge together to acquire these mutually cooperative results.  The microscopic end combines physics, chemistry and biology.  The macro level team involves engineering, materials science and computer science. 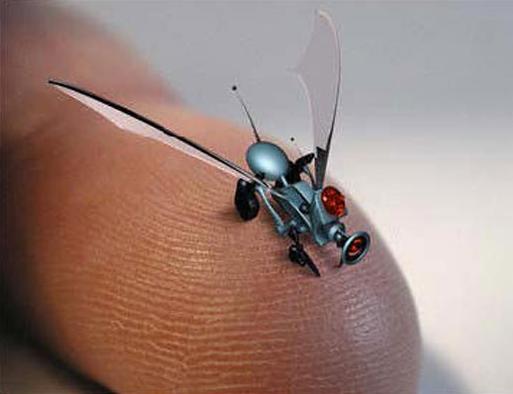 Nanorobotics improve the quality of products, producing materials that are lighter, stronger, or more efficient in performance.  They can be programmed for specific tasks. They have already excited the medical community for their implications in microscopic surgery, information gathering and imaging possibilities.  Within the next few decades, we may be able to produce nano particles that will repair damaged tissue and destroy cancerous cells.  Artificial bone paste made of nanoceramic particles have a promising future for bone repair and replacement.

With nano technology, the medical possibilities seem almost endless.  By injecting nanobots directly into the bloodstream, they could remove blood clots, destroy tumors and repair diseased organs.  Injuries would mend quickly.  However, the nanobot miracle cure may still be quite a few years in the future.

One of the biggest problems in nanobot research is the amount of material needed for testing the theories.  Stated Shawn Douglas, a researcher for the University of California, San Francisco, they needed 100,000 times more than the small amount of material they were testing, which would basically bankrupt their laboratory.

Pharmaceutical studies are designed to look for results in the end organ or illness.  But when it comes to nano-particle delivery, they also want to know if the actual movement of the bots through the injection to the affected organ worked the way it was designed to do.

Samuel Sanchez, a Catalonian with a PhD. in chemistry and a global leader in Nanorobotics, is more optimistic.  He is one of two world leading academicians focused on developing Nanorobotics applications.  Sanchez’s research concentrates specifically on using biodegradable materials to carry medicine or sensors into the body, than disintegrating.  His optimism is buoyed by Grand View Research and Transparency Market Research, which covers everything from nanopharma to cardiovascular monitoring systems.  They expect funding to grow to $200 billion by the year 2020. 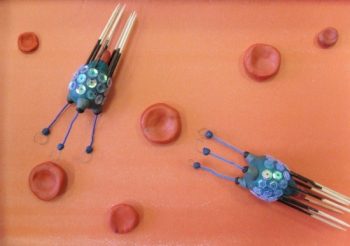 Hod Lipson, an assistant professor at Cornell’s Department of Mechanical and Aerospace Engineering, as well as the Department of Computing and Information Science, wants to design self-replicating nanobots.  He has already created a machine that does just that.  Using cube-shaped robotic units that functioned independently of each other, each programmed with a microprocessor, a motor and electromagnets, he built a machine that could replicate itself in just two and a half minutes.  “It doesn’t do much of anything else,” he apologized.  But he noted it would have been fairly easy to add grippers, cameras or other specialized equipment to give it a useful function.

Lipson’s goal is to create a machine that can self-replicate and also do something useful at the nano-level.  Self-replicating nanobots would cut down on the expense, as well as make improvements on themselves.  The improved structures could attack cancerous cells and reassemble them far faster and more accurately than is currently possible.

We have arrived at the very threshold of nature versus the age of machines.  Nanobots are fashioned to imitate nature on the molecular level.  Through understanding the principles of self-reproduction in nature, Lipson feels they can make robots more robust and adaptive. Lipson visualizes being able to send self-replicating robots into space for colonizing planets.  If an assembly breaks down, instead of being tossed, it would rebuild itself with a new, improved structure.

Opponents feel the artificial versus nature edge has been cut a little too deeply.  Researchers at Rice University of Texas report that nano-sized buckyballs, a soccer ball shaped, carbon based molecule used in nanobot construction, is water soluble and can interfere with the respiration of soil microbes.  They also reported these same molecules have caused brain damage in certain species of fish.   Prince Charles, heir to the British Throne, has been one of the most visible and outspoken opponents.  He feels that nanobot technology could produce enormous environmental and social risks. 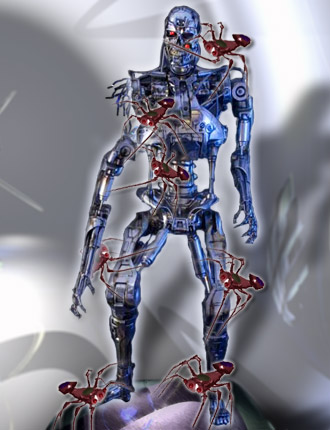 Science fiction writers have had a field day with self-replicating nanobots.  The most popular worst-nightmare scenario is that they would rapidly reproduce themselves until there was nothing left of the world except gray gook.  Artificial self-reproduction is already a risk, as has been seen in computer viruses and genetically modified crops.  However, researchers feel a responsive design can be controlled and modified, and that a gray-goo scenario is the least of their worries.  A more concrete fear is that nanobots would be used to create spyware and biological weapons.

Other science fiction scenarios include the use of nanobots to terraform planets, nano-technology that manipulates the memories, hacks the senses and performs general brain re-wiring, as well as nanobot built androids who think independently and rebel against their creators.  Star Trek Next Generation fans were introduced to nanites, intelligent, nano sized beings that rapidly reproduced themselves and threatened the main computers of the Enterprise.  They were eventually dropped off at Kavis Alpha IV, where they were allowed to be fruitful and multiply in peace.

Samuel Sanchez feels science fiction is just temporary fiction.  Nanobot technology is here to stay and will soon transform the way we manufacture, give us endless possibilities for cures and improve the global standard of living.  Whether they are biodegradable or self-replicating, their impact on society will be significant.  One day, we could become practically immortal through the use of nanobots, or we could see an uprising of the tiny machines who gained increased intelligence and self-awareness over time.

Self-replicating nanobots create the theme for my upcoming science fiction novel, “The Crying Man”.  A sequel to “The Icelandic Accord”, the nanobot born are pitted against the general population when their nanobot-improved minds give them the edge in computing their sensory intake as well as a ready adaptation to any environment.  It’s a world that desperately struggles to grasp a definition of human, when human DNA can be found in everything from artificial intelligence to genetically manipulated hybrids and the nanobot born are rapidly evolving into a supra-being.

The day of the bionic human is rapidly approaching; the day when machines blend with organic components to replace damaged bones, repair muscles, improve blood circulation and possibly makes us immortal.