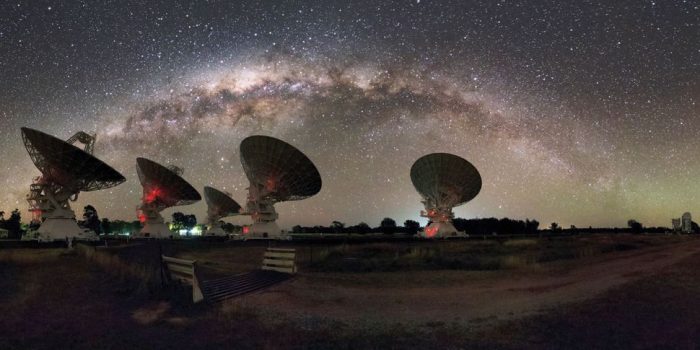 For years, scientists have been astonished by short blasts of radio waves coming from a distant galaxy.  Theoretically, these blasts could be triggered by a number of things, such as black holes, the collision of large interstellar objects or the final flares of a dead star, all of which would be a cataclysmic event, with a one-time only fast radio burst (FRB). The least popular theory was that they were artificial in origin.

Thousands of FRB’s have been recorded and analyzed, and all have reached the same, less interesting, but logical conclusion; the bursts were all one-time events; until something very extraordinary happened.  In May of 2011, a burst occurred in the constellation Aquarius, lasting approximately three milliseconds.  The duration was long enough to chart a map to its point of origin.  Mapping interstellar objects is somewhat like sonar imaging.  It involves collecting detailed information about polarization or how incoming radiation – such as light and radio waves- is oriented.

Their findings carried them to the outer limits of our galaxy and the possibility drive of imagination.  The radio waves had twisted as they passed through the cosmos, something that could only happen if they had passed through a magnetic field. But they didn’t receive their extreme distortions from the Milky Way.  There is nothing in the Milky Way that could create a strong enough magnetic field to twist the radio waves this extensively. 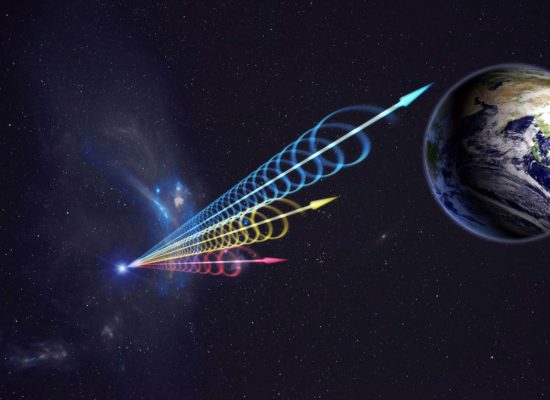 If the long distance radio signal wasn’t exciting enough as an alien presence in our galaxy, there was more to be learned about those fleeting milliseconds.  The team of researchers concluded not only did the FRB’s originate from a dense magnetic field, they had passed through at least two clouds of ionized gas.  As the burst traveled from its point of origin, the clouds scattered the radio waves and changed the shape of the waves, producing distinct signatures.  The first cloud was believed to be at the FRB’s origin, the other, in the Milky Way.

In 2012, a few new quirks were added to the case of fast radio bursts.  A particular signal, labeled FRB 121102,was not conforming to the pattern of one time only bursts.  A team of students from McGill University led by PhD student, Paul Scholz, determined the unique signature of the FRB was followed by several bursts, all of which retained the properties consistent with the original signal.  Running the data through a supercomputer at the McGill High Performance Computer Center confirmed FRB 121102 had emitted a total of ten new bursts following its initial detection.

Scientists prefer to err on the side of caution.  What had once seemed implausible, such as pulsars or black holes, are now established variables in that incredible vastness of space, with reminders to look for natural causes before jumping to conclusions.  To all appearances, FRB 121102 is an artificial signal as it repeats itself from the same point of origins.  However, to send out a radio signal strong enough to leap across a galaxy would take an enormous amount of energy; far more than our planet is capable of producing.

It’s safe to assume that in our galaxy, any extraterrestrial civilizations would probably be using a very narrow band of radio wave frequencies, much as are used on Earth.  Radio waves travel at the speed of a light year.  This means our very first transmissions are now 110,000 light years away from earth, at the edge of a sphere that contains numerous star systems.

However, radio waves degrade as they spread out over the cosmos.  The signal will be only one fourth as great as it was at twice the distance from the source.  At ten times the distance, the signal would only be one-hundredth the strength.  For a radio wave to travel six billion light years, it would take one month’s worth of energy from a medium sized sun to make a transmission, at least by our galaxy’s known Laws of Physics. 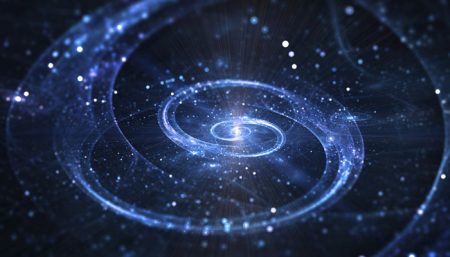 The Aquarius Constellation’s position away from the galactic plane gives it a deep space environment of other galaxies, globular clusters and planetary nebulae.  Since 2013, astronomers have identified twelve exoplanet systems traveling around their own stars.  Six hundred fifty light years from earth, in the Aquarius Constellation, the Helix Nebula dazzles the telescopic eye as it goes into its death throes, pumping out ultraviolet radiation from its sizzling core.

In our night sky, it doesn’t appear very significant.  None of the stars within the constellation have greater than 2.94 magnitude.  It is composed of two yellow super giants, three blue-white stars and a spectral type white double star.  Yet, within its borders, the Aquarius Constellation has remained very busy keeping its observers entertained with relayed FRB’s, dying stars and bordering stars containing interesting planetary systems.

To those who have faithfully watched the science fiction future of travel, the Aquarius Constellation would seem like a natural gateway for extending our communications and ambitions to explore strange new worlds into other galaxies; that is, if we could develop the technology to travel at the speed of light.

The closest star containing orbiting planets within the path of the Aquarius Constellation, is a red dwarf, fifteen light years away.  Even if we could attain the staggering speeds; within one year, light travels nearly six trillion miles; it would still take our team of science explorers fifteen years to reach their destination.  A more convenient use for experimental light year travel, would be Alpha Centauri, earth’s closest star system.

Scotty, Prepare to Beam Me Up

In science fiction, it’s that warp signature of an engine that has acquired the speed of light that heralds the true era of space exploration.  By current historic landmarks, we still have a long ways to go.  Our space shuttles are not space craft.  At their maximum speeds of 17,600 mph., it would take a space shuttle 165,000 years to reach Alpha Centauri.  The Voyager I and II spacecraft, launched in 1977 are only just now, leaving our solar system. The New Horizon took nine and a half years to reach Pluto.  It would take 78,000 years to reach Alpha Centauri.

The big problem with conventional propulsion engines is energy.  It would take ten thousand shuttle engines built in sequence, using our current technology, just to supply enough energy just to build a decent descent speed.  Scrapping conventional methods, a few bold and daring physicists have begun their search for the Holy Grail of warp drive.  Dr. Harold, “Sonny” White, who leads the NASA based Propulsion Team at Johnson Space Center, claimed to have discovered a faster-than-light means of travel known as the Alcubierre Warp Drive.  Theoretically, the drive stretches space and time in a wave that causes the fabric of space ahead of the ship to contract and the space behind to expand, allowing it to accelerate to high speeds and time travel.

While it sounds exciting, there’s still the problem of energy.  In order to form a space bubble, there would have to be a region of space-time with negative energy density.  While scientific models predict exotic matter with negative energy may exist, none have been observed.  All matter and light within the scope of our current knowledge, have a positive energy density, creating an attractive gravitational field.  We may still have a long wait in store for our anti-matter.

NASA may be drumming its fingers, going back to the drawing boards over and over again, tweaking conventional propulsion engines to travel faster and more efficiently, but a group of entrepreneurs have taken to the high road of sailing.  Led by Russian billionaire, Yuri Milner, a one hundred million dollar, proof-of-concept study is underway for sailing on a light beam.

The Breakthrough Starshot proposes to use its funds to discover whether it’s possible to use a 100 gigawatt light beam to propel the light sails of around 1,000 ultra-light nanocraft to twenty percent speed of light.  If it’s shown to be theoretically possible, a mission to Alpha Centauri could be accomplished in twenty years.

The first light-sail project deployed its orbital test in 2015.  The spacecraft’s sail deployment mechanism tested positive, but it did not fly high enough for the push from solar sailing to overcome Earth’s gravitational drag.  The second light sail test is scheduled for 2016.  Investors include physicist Stephen Hawking, and Facebook’s Mark Zukerberg.

Our Broadcasting Stations are Open

It seems appropriate that we are entering a new era in space exploration during the fiftieth anniversary of Star Trek and Gene Roddenberry’s far-reaching visions.  We’ve mapped out the stars in greater detail, learned of their planetary bodies and discovered there are a great many unsolved mysteries beyond the edges of our galaxy.  We’ve learned how to aim, focus and amplify radio signals to mitigate signal degradation for interstellar communications.  We have our listening ears on just in case somebody answers.

It’s possible that within the next twenty years, we’ll have achieved interstellar travel.  We’ll be able to explore the star systems just beyond our own and radio in to see if anybody’s home.  Will we find earth-like planets?  Will they spill with an abundance of life?  Will we find life in strange and unusual forms?  Will our journey take us through time and space warps, worm holes and alternative dimensions?

Travel into the unknown is the essential craving of the pioneer spirit, a spirit that drove humankind to explore and discover the world around them.  Our inquiring minds have measured the ocean’s depths, deciphered earth’s history, and traced our evolution to the molecular level.  Now, our minds expand outwards, with giant telescopes studying the far reaches of space, giant ears recording its transmissions, and giant computers rapidly sorting and storing the data for inquiring minds to process.

As pioneers, we crave new knowledge.  As entrepreneurs, we see possibilities, new natural resources, suitable areas for colonization, interplanetary gateways.  As a social people, we hope to find extraterrestrial life and a sentient species.  We hope, and I’m sure it occurs to most who have followed the science dream of a pathway into the stars, that should we find life, we will treat it respectfully and that it will respect us in return.  We hope this because at the back of our minds is a little “what if”, of a repeating radio signal six billion light years away that could be artificial.

As we expand outwards, examining and listening to the stars, the question becomes not so much are we alone, but how we can explore the far reaches of space.