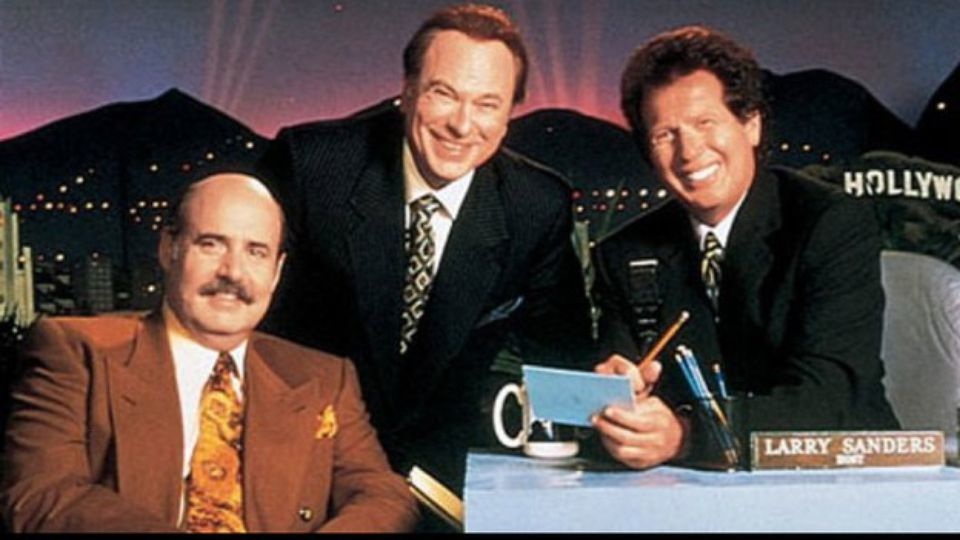 The late Garry Shandling did something rather unprecedented in Hollywood, by walking away from a job that made sense. Whereas he had the clout and name awareness to take over a talk show and become another rival to the Leno, Letterman and Arsenio war, he chose to stay mellow—to be a midnight toker telling jokes to a select few, whose minds were opened to embrace a new form of comedy/drama.

This was during the nineties, a time when commerce was strangling art and independent films were going for the jugular. Garry was quite the prophet. He foresaw what would happen if he entered a crowded field and fought with old friends over a thankless job and decided to pass…in favor of trailblazing the sitcom genre with The Larry Sanders Show and predicting what tomorrow’s comedy would be like.

What those fortunate enough to have a little cable network called HBO watched, wasn’t really 30 Rock or The Office—it wasn’t a carefully coordinated genre with clear punchlines and meant for an audience used to the cues of reality television. Instead, they saw something they had never seen before, and something that made people feel just as uncomfortable as entertained.

Rewinding one’s memory to over 20 years ago, try to remember just what it felt like to watch The Larry Sanders Show with no expectations or even a point of reference for understanding what we were watching. Garry Shandling was doing Monty Python—he was creating a live action, scripted “exhibit”, a trompe l’oeil of simulated reality posing as a sitcom.

It was not just an avant-garde show exploring the freedom of a cable channel that hardly anyone was watching…it was also a blueprint detailing what comedy could be, if only the censors stepped the hell out of the way.

Thoughts Watching The Larry Sanders Show for the First Time

These people were funny but somehow still existing in reality, with their own lives off of television, and thus no accountability to network censors or even the demanding audience. Every sitcom at the time had a laugh track because how else would the audience know how to feel about all their favorite caricatures? Shandling killed the laugh track and forced people to get involved in a fictional world, laughing only when they felt like it, and cringing just as often. The reality was what we were watching.

2. “Why does everyone swear so much?”

In an age that preceded Beavis and Butt-Head, Seth Rogan and James Franco movies, and South Park, it just wasn’t television’s place to introduce sledge hammer vulgarities into normal dialog. Likable people on TV didn’t talk about f***ing. Shows like Dream On and The Larry Sanders Show challenged this staple of morality by insisting that it’s how everyone in Hollywood talked. Sure, it’s how everyone outside of Hollywood talked as well and it was about time the censors embraced the vast community of people who didn’t attend church regularly, who actually laughed at dirty jokes. In many ways, characters like Hank, Artie and Larry helped introduce the art and wit of millennial vulgarity.

3. “Why are all these people playing themselves?”

Breaking the fourth wall and exploiting semi-autobiographical humor was practically unheard of in television, though Robert Altman movies and radio’s Howard Stern were already giggling at their own brand of self-parody. But Larry actually let everyone in on the gag, welcoming celebrities who were playing “evil” versions of themselves and not trying so hard to appear altruistic or endearing to their fans. Why should they? Their fans were probably not even watching the show and so it gave Shandling the opportunity to mock Hollywood and antagonize the audience with some great moments of “reality television” that were, naturally, left off the air in the Larry Sanders universe. The behind the scenes drama, as we can all imagine, had to be much more interesting than the boring and overly rehearsed interviews that actually make it to television.

4. “Is this supposed to be Woody Allen for TV?”

The crude thought must have also occurred to fans of The Seinfeld Chronicles, who along with Sanders’ epic vision of mundanity, was laying down the foundation for reality television—that is a show about nothing, except of course human conflict in every aspect of life. Everyone in the 1990s assumed Seinfeld and Sanders were doing Woody Allen; an intellectual analysis of neuroses and psychological disorders. But the truth was less Freudian and more about the proverbial Man Vs. Himself story arc that we all encounter in our daily lives, whether we work in Hollywood or not. So we were treated to entire episodes about the network suing Larry for breach of contract, or about Paula’s abrasive manner intimidating guests, or about Hank Kingsley selling his soul for his own thigh master rip off products. Story lines that were arthouse (what everyone misidentified as Woody Allen) and not commercial in any way.

Actually, Larry was portrayed as lawful narcissist and was one step above Artie, Hank, Jerry and Phil, who seemed like amoral monsters in comparison. The fact that Sanders never really found love made the show feel like an anti-climactic sitcom. Everyone had sex (most famously Hank who had a sex tape long before Paris Hilton) but Larry, true to narcissist fashion, was never qualified to find love on his own terms. Most of the show explored wasted relationships with not one, but two of his insane ex-wives who grew tired of babying him. After they left, he spent the rest of the show having loveless sex with celebrity guests and continuing to create tragic one liners—as all the best comedians do.

And probably with good reason, and not only since Larry Sanders was the star of his own book in “Confessions of a Late Night Talk Show Host.” The story lines of the show were the comedic answer to Law and Order‘s format of ripping real life stories straight from the news, except that Shandling simply took old show business urban legends about Letterman, Leno and Carson and dramatized them just as they happened. But because talk shows draw the funniest people in the world, the behind the scenes drama, filmed as is, just happened to be hilarious. So there you have it—The Larry Sanders Show was intentionally acting accidentally hilarious. Now that sounds like a Buddhist truth. By the time the movie The Late Shift was made, based on the successful book, it felt like overkill because Sanders already did it better.

No wonder the world of show business was so reluctant to embrace Larry. Not only did it only win only two major Emmy awards (less than even Roseanne, another dark horse and despised show that rubbed Hollywood the wrong way) but it also gathered reluctant praise from critics, including rags like Entertainment Weekly, who insisted the show was almost too smart to be funny, buying into the network logic that comedy is intrinsically stupid and cannot be intellectual. It wasn’t too “smart”—Frasier proved smarts can be funny and warm-hearted. But it was viciously acerbic, far surpassing Letterman as the meanest and most cynical show on television, while also dominating the collegial crowd who expected a little more Oscar Wilde and less Cosby. All the years it was on the air, it remained the King of Mean, until a little animated cartoon called South Park picked up the reigns and went full Fritz the Cat to a new generation of jaded middle-schoolers who wouldn’t get Shandling’s inside jokes…but definitely appreciated the lost art of obscenity.

Larry Sanders, Satan bless him, was also the kind of guy who always insisted on prematurely exiting the stage, leaving the audience wanting more. It was just like him to announce his retirement from television without telling anyone (even his staff) and run away to Montana. Ironically, actor and creator Garry Shandling left the world the same way. Leaving us wanting more. Always the forward-thinking, unsentimental showman. Not only am I shocked that Garry beat hard-drinking Rip Torn into the promised land, but I can’t help but wonder how egocentric sidekick Hank thought of his death and how it made him look. Much like Sydney Lumet’s movie Network, it was a show that didn’t try too hard to be funny but tried to be pessimistically truthful in a mad world. And now, 20 years later, most of our dramatic and comedic TV line up owes a toast to Shandling.

And wouldn’t you know, Larry Sanders, when reached for comment took the high road. “I hope my death beat Leno.”

The late Garry Shandling did something rather unprecedented in Hollywood, by walking away from a job that made sense. Whereas he had the clout and name awareness to take over a talk show and become another rival to the Leno, Letterman and Arsenio war, he chose to stay mellow.