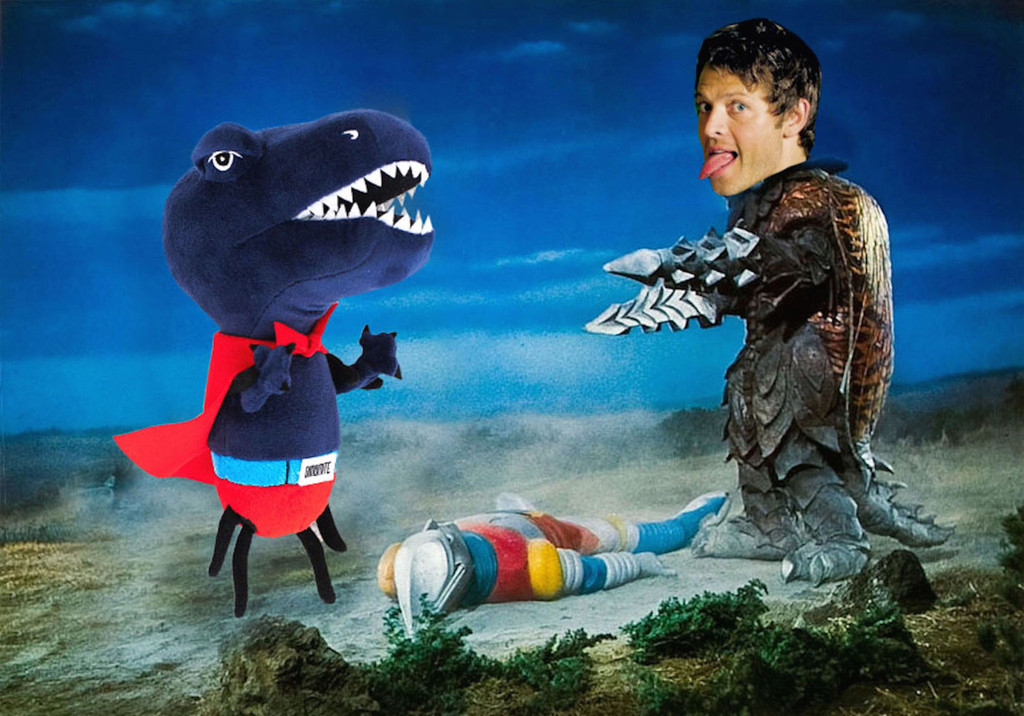 The Greatest International Scavenger Hunt The World Has Ever Seen -2015 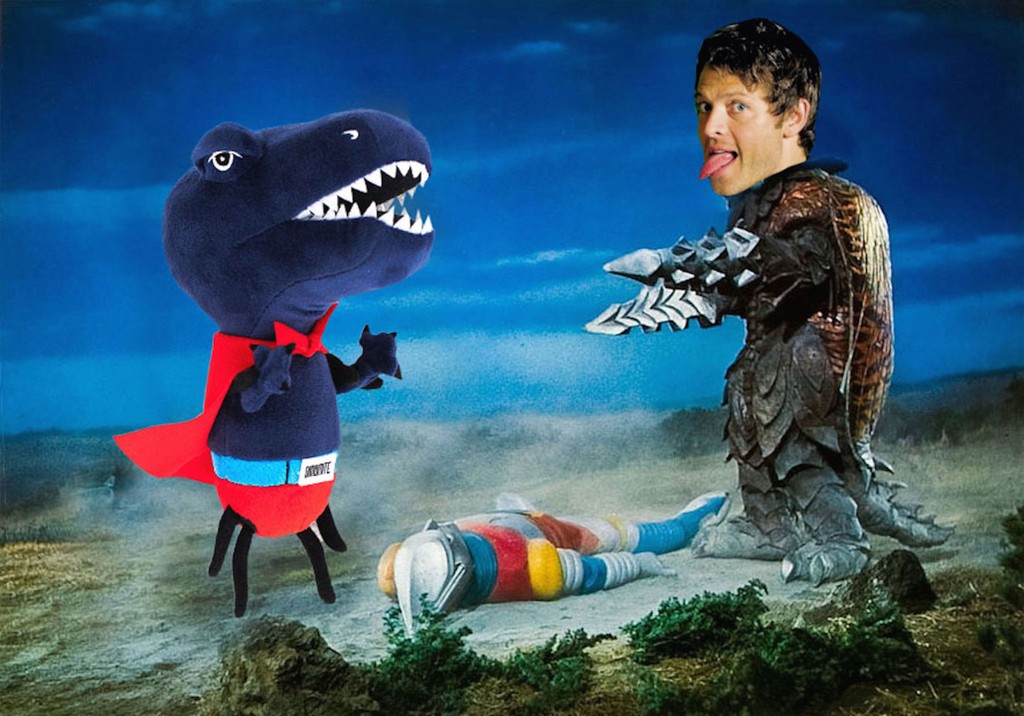 I decided in the 11’th hour this year to participate in Misha Collins’ brainchild Gishwes.  It was literally the 11’th hour prior to the end of the registration.  I think it was Misha’s gishbot bully letters telling me how much he cared about whether or not I was stuck under a couch or overeating Cheetos and forgotten to fill out my application that pushed me into decision.  Nicely played Mr. Collins, I was over eating Cheetos and decided I probably should do something for myself before the summer was over.

So, I found myself paying $18.89 to register and chose the option to be put with a random team because none of the people in my life wanted to participate in the Greatest International Scavenger Hunt The World Has Ever Seen.  I paid and then I freaked right out wondering why on earth I had let this happen to me. I wasn’t sure I wanted to do it after all.

I had known about Gishwes for two years, and enjoyed the hijinks from afar.  I had discussed with several people joining last year and even thought about putting together my own team this year but thought I didn’t have enough time.  Turns out I didn’t really have enough time, but it also turns out that’s kind of the point, to work silliness, kindness, good works and stepping outside your comfort zone into your daily life.

I’m a huge fan of the comfort zone.  I live in it all I can.  I have designed my life to be a comfort zone and how I found myself thinking I needed to challenge that I will never know.  One thing I learned is it was incredibly hard to do simple things that I wouldn’t do every day.  Like finding time to build a centerpiece out of origami.  That was possibly the easiest and first thing I did and it was as hard as everything else to get going.  (Pro-tip: I outsourced it to child labor)

On Aug 3rd I wrote this about the experience:

I’m beginning to think that people plan their whole entire year around Gishwhes.  How else could one prepare to go on a transcontinental road trip? (item #38) Which sounds really really fun and I wish I had planned better.

I did not plan at all.  Gishwhes hit me between paychecks which required me to get creative.  And crafty. And frugal.  None of which are things that come naturally.  There are moments when I smile at the fact that I am a part of a world wide record breaking thing!  Then there are moments when I look at my sad, sad origami centerpiece and wonder what I was thinking.

I have fear waking in the night. Am I going to let down my teammates, one of whom made a dress entirely of flowers and what looks like cabbage?  How can I live up to that?  In some ways this makes me feel exactly like jr. high school.  Scared, insecure, bewildered.”

I had thought to journal every single day and everything that I did.  I didn’t have time.  I was busy plotting out random sculptures, encouraging team mates online.  Begging my family to dress in black tie and tour a sewer plant with a violinist.  My family refused me.  My family which includes an accomplished professional violinist refused this even though our local waste facility looks like this: 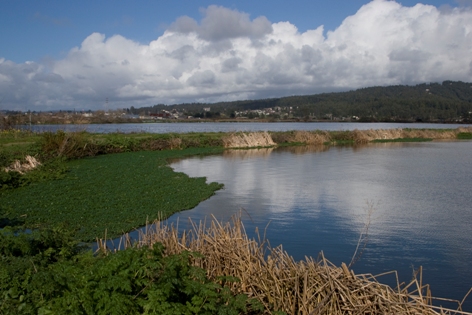 And has won many green-awards.  It is a bird habitat that doesn’t smell and I’m still a little bitter about it.  I paid for those violin lessons damn it!

It turns out I wasn’t the only one though.  Of the 15 people on our team, about 3 never made contact.  Several had life events come up that kept them from participating.  I actually thought about allowing life events to be my excuse several times.  The only reason I didn’t was because something happened.  I started seeing things in a different way.

One day, after the deli I had chosen for the challenge of ordering all condiments turned me down; I’m not as bitter about that because honestly the place is literally called ‘A Hole in the Wall’ it is one, and there is a typical lunch crowd of about 50; I was driving away dejected when I heard a report about drop offs for fire relief.  We have had a terrible fire season in California.  It wasn’t on my list at all, it could fulfill nothing, but I did have toilet paper in my car.  So I drove 20 min away to the drop off point and gave them my toilet paper. It was one of the most asked for items, behind water and baby wipes.  I was noticing and hearing opportunities more outside of my own circle of influence because I was stepping outside of the comfort zone.

It’s not as if I don’t serve often, I do.  In fact, the week following Gishwes we already had a Random Acts.org event planned, it’s just something we do in our house.  But, this treasure hunt of insanity was putting me in a new and bigger circle of influence.  I don’t know whether that will shrink back down or not.  In some ways I think it will.  In other ways, like the way I look at needs including the need for fun and stress relief and smiles and doing things that make memories, I don’t think it will shrink much at all.

As I mentioned, I was put on a randomly chosen team. I did not know anyone at all.  Nobody else did either.  There were people in Denmark,Norway, California, The East Coast of the U.S., England.  I’m not saying we made bosom buddies, but those of us that were active in our group still follow each other on Facebook.  As I get to see snapshots of their lives I see that they have more in common with me than not.  By joining this global scavenger hunt, I found members of my tribe that I probably would not have otherwise.  It’s very rewarding to watch and support and get to know new people in this relatively new if somewhat scary way.

I had to learn to get past my fear of taking video of myself.  Several of my challenges included video.  I hate taking video.  I did it anyway, when I completed the Felicia Day Challenge to read dramatically my grade school report card.  It’s pretty awful, not that dramatic and I hate it.  The world now has access to it, probably.  I had to take unflattering pictures of myself, because nobody poses nicely outside a Mental Hospital at night when dropping off games.  Or if they do, they are kinda douchy.

What I did not do but wish I would have thought of is to take more pictures of me and the process.  A lot of the challenges required that I take a picture with others.  Pictures with others that are going to be broadcast to the Misha-verse is a hard sell.  We all know what he does with his celebrity contacts: Teasing,fake accounts, Shatner stalking, etc.  As Donald Trump found out this week, Misha Collins will even look for a job in your name. http://www.ew.com/article/2015/09/16/misha-collins-donald-trump-linkedin-profile

Naturally, not everyone we worked with wanted a photo and those who agreed, often made it requisite that we only post to the Gishwes site.  So I wish I had thought to take more pictures of me.  But here’s a video of Snails racing that was taken my new BFF in Denmark, Vibeke Holst Christensen: 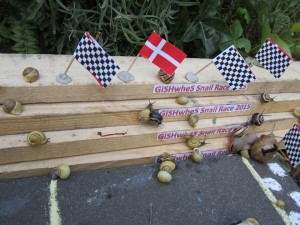 And here’s a picture of my favorite art and craft of the game: The Sanitary Napkin Dog, by My BFF in Santa Barbara, Kimmie Chan: 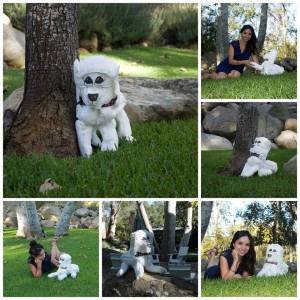 Even if I never do this again it was totally worth it.  Here’s a piece from what I wrote on the last day, August 8th, 2015:

“ I thought this would take too much time, that’s why I almost didn’t do it.  I thought I was tapped out and couldn’t possibly make time for more.  But, I could.  It was easier than I thought. This was an amazing miracle.  The miracle of having enough time.  I  thought it would be expensive.  I had exactly zero $ this whole challenge and I did everything and more than I set out to do. I even found more places to commit random acts of kindness and that is the biggest lesson I got from this week. “

I really didn’t end up spending any money after the initial fee.  A lot of people had scholarships for their fees and paid nothing at all.  Outside of some travel, there was mostly free things that could be done on the list.

Would I recommend participating?  I can’t say really what’s for you.  You will stretch yourself.  People will look at you like you are crazy or babbling.  You will feel uncomfortable unless you are the most outgoing of people.  It’s really up to what you want to get out of the experience.  You can’t avoid helping people, and that’s what the entire thing is really about.  Making your time on this planet worthwhile not just to you but for someone else.

Here’s me with a Mustache: 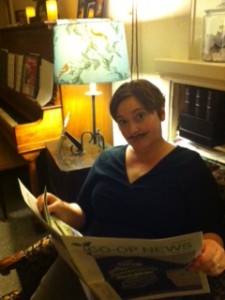 If you want to find out more or give it a try you can find all the information you need and more at https://www.gishwhes.com/

*as of writing winners have not yet been announced.

Grainne’s experiences Gishing for Good with Dinomite and friends.