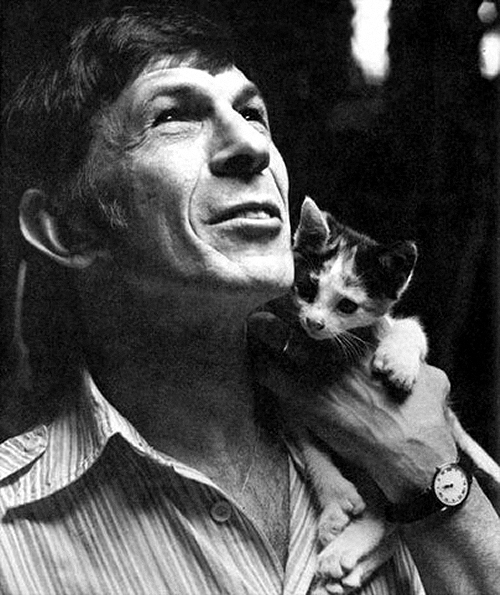 Normally, when celebrities pass away, there is a moment of intense grief, expressions of sorrow among friends, relatives and fans, eulogies that proudly and sadly listed the achievements of the departed. Nimoy’s passing was subdued and hopeful. The messages were those you might give to someone going on a long journey. “Farewell my friend. Live long and prosper. May you go where no person has gone before.”

For followers of his wonderful, half-alien character, Spock, death isn’t the end of a chapter but the beginning of a new one. The popular television series, Star Trek, and its subsequent movies demanded a boundless, elastic mind that accepted multiple dimensions and alterations in time and space. Spock dies and is put to rest in “The Wrath of Khan”, and is resurrected on Genesis, a planet humanly engineered to support life, in “The Search for Spock”. The metamorphosis gives him a new purpose and direction that is so deeply spiritual, he abandons his star fleet post.

He guest appears in the 2009 version of Star Trek as a sage old man guiding his younger self, once again bringing multi-dimensional image to his character. His work after Star Trek continued to explore the unknown frontiers of space, time and unexplained phenomena. He narrated for the IMAX film, “Destiny in Space”, showcasing footage from nine space shuttle missions from a four year time period. He also spent three years narrating for the documentary show, “Ancient Mysteries”, his mellow timbre adding a riveting depth to the wonders of some of humankind’s earliest wonders.

For awhile, Nimoy tried to resist the connection with his own personality and Spock’s. His 1975 autobiography was titled, “I am not Spock”. It took years of sharing his existence with this iconic figure before he released a second autobiography in 1995, titled “I am Spock”. 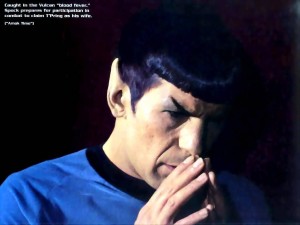 Spock was perhaps one of the most challenging characters to screen write, and difficult ones to play. Gene Roddenberry’s vision was a more evolved alien species, humanoid, with human attributes, but with greater intelligence and better control over their emotions. Week after week, Spock confronts not only new species, but new observations on human behavior, with the word, “fascinating”, and calmly reaches logical conclusions despite the frustrations of his team mates.

Unlike Data, the android searching his humanity in “Generations”, Spock must struggle with the humanity inside him. He feels pain. He feels anger. He sometimes feels the agony of love. He is able to read the passions in others, which sometimes cause him sadness. He lives by a humble truth that sometimes the good of the many outweighs the good of a few. 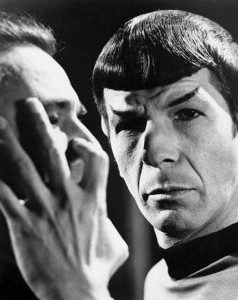 There is a subtly woven in message about Spock. He is neither fully Vulcan nor fully human. He must both combat feelings of being a social outcast on his home world, and cope with the prejudices of humans. Although his team mates accept him, he is the target of “inside” jokes that puzzle him more than they upset him. This flaw in his ability to understand their humor is what ultimately endears him more than all his superior qualities put together.

From his first appearance as Spock on the pilot Star Trek episode, “The Cage”, Nimoy was destined to represent one of the most sophisticated alien species ever fashioned for television. He was the only member of the original cast to be used for the series. For young science fiction fans who fed on a steady diet of Isaac Asimov, Jules Verne, Ray Bradbury, Arthur C. Clarke and Robert A. Heinlein, Spock was the alien they had visualized, the one whose alternative perspective created a deeper and broader understanding of our true capabilities. They were primed and ready, and Nimoy never once disappointed them.

Spock has become the iconic interpretation of a Vulcan. With one broad stroke, he had presented a model for all other Vulcan behavior. The actors and actresses that have portrayed other Vulcans for subsequent Star Trek themes studied the characteristics of Spock, from his composure to his quirky lift with the eyebrows and did little to divert from a Spock styled personality. 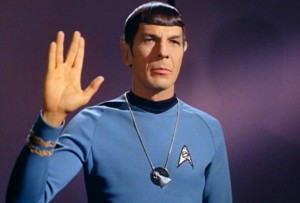 Leonard Nimoy, the man, was an exceptionally gifted person. Cultivated, well-educated, he would have succeeded at any employment, but what he did best was bring to us truths that extend beyond the stars and defy time and dimensions. He appealed to our logic and reason, but also to our compassion, our human side that embraces all life in its myriad forms. Spock became his mouthpiece for envisioning a world where we don’t have to say goodby, just “farewell my friend”.

Karla Fetrow: The parting messages to Nimoy were like those you would give to someone going on a long journey.