From Hero to Villain:

Superman and Family Indicted for 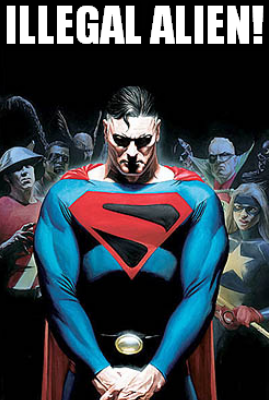 Justice Woman has been tasked with the defense of Jonathan and Martha Kent, who are charged with harboring an illegal alien. At issue is the origin of their assumed son, Clark Kent, also known as Superman, whose DNA sample did not match either of the Kent’s, nor anyone else in the data base. The Kent’s retracted their initial story of home birth to state they had found Clark as an infant, abandoned at the side of the road. Plaintiffs for the case stated the Kent’s made no attempt to contact local or state authorities after discovering the baby or to initiate a search for the child’s parents.

Plaintiffs are also investigating Clark Kent’s employers with the Daily Planet. There is no record that Kent had, at any time, filed for an immigrant status, green card or citizenship papers, and may have been receiving undocumented earnings. The IRS is currently examining the employee records, pay roll and accounts, although as an International syndicate, it is suspected the Daily Planet moves much of its private assets to off-shore banks.

A win for the plaintiffs could mean that Thor, Wonder Woman and Wolverine will also be brought up on charges. “Our greatest concern here,” said prosecutor, Bill Sheldon, “is that they are crossing borders without legal documentation. “Wolverine apparently does not use a passport for crossing between Canada and the United States, nor does Wonder Woman seek a visa when transporting from the South American Amazon tribe. Instead, she uses a highly sophisticated stealth plane that renders itself completely invisible.”

Law enforcement agencies point to the staggering numbers of jobs lost each day when foreign super heroes solve their most serious crimes. “Each time a criminal gets lassoed with the rope of truth, each time Superman uses his ex-ray vision, we see a reduction in the worker ratio in terms of surveillance, laboratory analysis, and other functions of investigative agencies. Foreign super heroes are stealing American jobs,” said Sheldon. 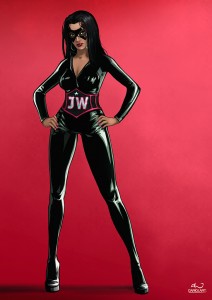 Justice Woman told news reporters she has accepted the position of representing illegal superheroes in the hopes of influencing true immigration reform. She maintains that alien super-heroes had always acted from the convictions of high moral and ethical consciousness. While their national origins may have been in conflict with immigration laws, they had done enormous services to America’s society, keeping it safe, with dangerous criminals brought to rapid justice.

Although Justice Woman is of Latin American descent, she is a U.S. citizen, born and raised on American soil. She finds it ironic that she is the only All American hero within the League that consists primarily of illegal aliens and mutants, yet she would not be who she is today without the influence of these superheroes.

This fiasco might very well be the answer to the long-awaited question of Why don’t more aliens from outer space visit us? Maybe because they’re scared of our policies!

Lex Luthor, advocate of stricter superhuman control laws, requested a hearing with a House Judiciary Committee, stating that the president’s recent November decision to halt deportation of some illegal aliens operating without a license and corporate sponsorship was “lawless.” The owner of LexCorp predicts these radical laws are only going to encourage more crime fighting, more saving babies from fires, and more superhuman intervention on big commerce days like “Black Friday”.

“Don’t try to make me the bad guy on this,” Luthor said to the press. “But when superheroes take the law into their own hands they infringe upon the rights of police officers, like our friends in Ferguson, to uphold the law. They do the jobs of firefighters. What are these brave firefighters going to do if some impervious-to-fire superhuman is jumping into burning buildings before they can? Worst of all, they chase away customers for Black Friday, because superheroes are making people second guess if it’s really worth it to stomp all over their neighbor to get a discount TV.”

Lucius D. Tommytown of Thunder Corporation agreed with Lex’s statement. “Obama’s latest action shows contempt for our democratic governing system. “Each time someone like Superman uses his ex-ray vision, we see a reduction in the worker ratio in terms of surveillance, laboratory analysis, and other functions of investigative agencies. Foreign superheroes are stealing American jobs,” concludes Tommytown.

Obama’s recent Deferred Action for Childhood Arrivals (DACA) act has already granted temporary work authorization and deportation reprieve to many undocumented aliens, in hopes that these aliens could be helped to live and work in the United States legally, and be assimilated into the welcoming culture, instead of simply ejecting them back into outer space.

Of course, anyone who’s ever talked to an honorable man like Superman knows his intention is not to smuggle Kryptonite onto the black market or to kill any innocent civilians for some Jax-Ur deviant agenda. He came here as an undocumented alien and only took advantage of what freedoms the United States was willing gave to him. In return, we received free heroic services from the Man of Steel, and gained another legal American who was eager to comply with the law and in his case, eventually uphold truth, justice and the American way.

The fact that a little leniency can go a long way in creating a positive force in society should be a reminder that it’s our responsibility as open-minded and compassionate beings to help illegal superheroes through the registration process, and not instantly label them supervillains just because of hearsay. Now more than ever we need immigration reform to protect these superheroes while they still believe in us, while they still have a dream in their hearts. Turning helpless alien children against us now because of antiquated and abusive anti-alien laws, will only create an entire generation of Eclipsos, Darkseids, Magnetos, or dare we say, even Ultrons. In holding onto our prejudices, what we are actually doing is fanning the flames of an intergalactic war!

While President Obama’s superhero-friendly Reform Act is a wonderful start to a changing political climate, it’s a battle that’s far from over. If anything, we need more reform in our immigration policies, including taking steps to help superhumans who are already living here but who are afraid to come out in fear of being persecuted and having their earthly and all-American families broken apart because of overly strict laws.

We want there to be more legal pathways to citizenship, and we want laws designed to help aliens and Americans, not merely punitive laws that only succeed in creating divisions. We as a compassionate human society are the ones who first taught Superman how to be a hero. We are the ones who shape our future. Aliens might not always be “human beings” but they are our neighbors and deserving of human kindness! 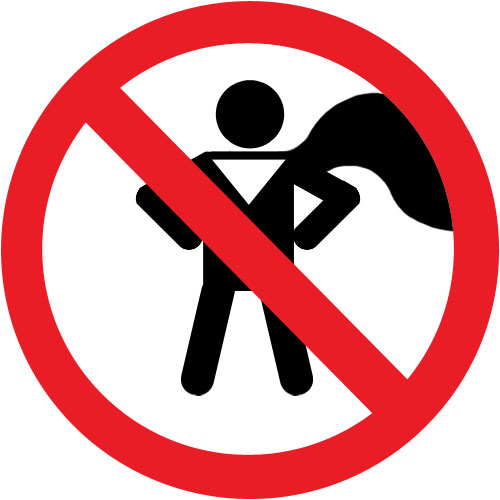 “Justice Woman” is a comedy-drama digital series that follows the story of Sofia Escala, a.k.a. Justice Woman, spunky Assistant D.A. by day, defender of truth and justice by night, who with the help of her office-mate and sidekick Robert (Roberta) Gallion fights to right the wrongs committed against the innocent and powerless by a corrupt legal system – and gets herself into some tight spots along the way. A smart, funny, fast-paced series that tackles serious issues of corruption in our legal system with a large dose of campy humor. Think “Law & Order” meets “Will & Grace” meets “Priscilla, Queen of the Desert.” Watch all new episodes at JusticeWoman.com/.