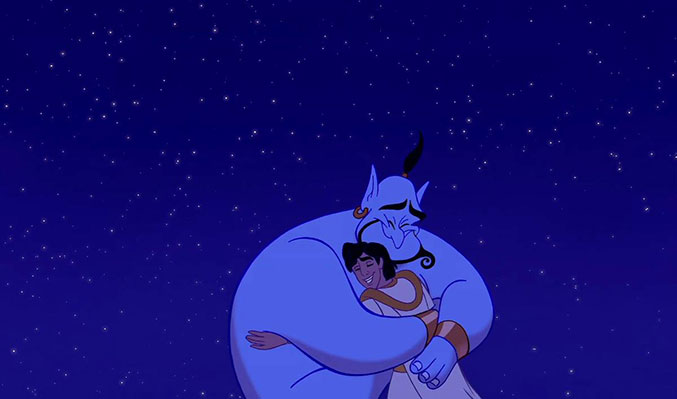 The typical chorus of “why?” and “shame on him!” were all but muted by unanimous praise for Robin Williams—the joy and laughter this human genie was capable of giving his audience. When Williams told a joke he didn’t just make us smile; he pummeled us into laughing submission. He was a surreal joke machine, every bit as manic as Groucho Marx, a living cartoon character that was larger than life and far too talented to hoard all of that golden wit to himself.

We all seemed to feel if not “know” what Williams was going through. His past battles with depression were documented and his Pagliacci Sad Clown Face was always in clear view whenever the bit ended. But Williams was a wonderful drug, a habit we never wanted to kick. His corny later-life movies, his scattershot standup comedy, and his curious dramatic acting turns, they were the really good sh*t that allowed us to forget about our own problems and survive another week. Whatever was coming next, it was going to be okay, because Patch Adams, Peter Pan, and Mork were going to go through it all first and show us how to laugh in the face of danger.

What was tragic is that no one had a mind as fast as Robin Williams; who could possibly entertain him as brilliantly, as insanely, as he entertained us? Williams, much like Richard Pryor before him, was a tortured soul who pulled comedy from the depths of pain and misery. The Road Runner of Comedy, Williams ran circles around other people. He was the type of comic you couldn’t compete against, even if you were a funny guy yourself. You beheld him and let him do his thing; you instantly became the spectator. He was the commodity that we all wanted—and every studio wanted him, even the ones who promised him parts he would never actually get.

In the end, the laughter we loved him for wasn’t enough to tame his inner demons—perhaps not so coincidentally, demons that appeared most frequently in his senior years. Taking a look at Williams’ body of work (from What Dreams May Come to even his bizarre dramatic cameos on TV shows like Homicide: Life on the Street) it’s easy to see that he outgrew comedy for the sake of comedy a long time ago. He was deeper than an extended laugh. He was multidimensional beyond a 2D genie. He had a heartbreaking pathos to share, and questions of great philosophical density if only we looked beyond the big red nose.

Whether Hollywood shunned his more dramatic, human-condition type works because of his comedy background, or whether he simply couldn’t handle the emotional catharsis that method acting required (just look at some of the soul-killing, emotionally brutal work Jack Nicholson and Bill Murray have been doing lately), we may never know.

But Robin Williams like, Philip Seymour Hoffman who also died from self-inflicting wounds, fell empty inside—despite having a family, despite a world-renowned name, and despite every logical reason we gave him to stick around. He did so painfully, as authorities discovered, using a leather belt, indicating an unhealthy degree of self-loathing. Mental illness was likely the culprit, but what this entertainer may have uncovered during those harrowing last few days, may well have been the “late life crisis.” The late life depression crises of existentialism, regret, and uncertainty that makes the midlife crisis look relatively easy to sidestep.

What is one to do when all life achievements have been met? When all adulation has been paid and all points have been proven to the world? Fame and fortune are not enough to quench a restless soul. The wonderful feeling you get from entertaining others only goes so far. And while most people are content to distract themselves with hobbies, like a physical disease, late life depression can eat away at your mind, heart and soul, leaving behind only ghastly remnants of the Real You.

When the fearlessness of youth leaves you, you do have to find an outlet that makes you feel good about life, your memories and your future. More importantly, you have to find an outlet that lets you share these positive feelings with the ones you love, and even well beyond your social circle. If you don’t share your life and your wisdom in some meaningful way with others, life will feel like nothing more than vanity. Taking care of one family is not enough, as we so often see. Leaving behind a legacy, indeed something more important than laughter and beyond talent, is what’s ultimately fulfilling to performer and to spectator. You want to leave behind something lasting, something emotionally profound, and something beneficial to the next generation.

And guess what, the world needs to hear it. Overwhelmed by social, ecological and political problems, society needs prolific thinkers to open its collective mind. Personal achievement is nothing without shared experiences, without relevant subject matter, and great ideas that bring about change. Ironically, Suicide Prevention Organizations are now criticizing Williams’ tributes, suggesting that the statement, “Now you’re free, Genie” could encourage copycat suicides. However, if you recall in Aladdin genie was freed for quite a while before the movie franchise ended. He just stuck around because he enjoyed the party. Now the party is over and Robin has gone home, after doing so much to help others, including multiple donations to charity organizations. His sudden exit was secondary to his triumphant life.

And hopefully Robin Williams’ body of work has inspired millions of people to be free—to live life uninhibitedly, to live life free of curses, and to start granting more wishes to people in need.

The typical chorus of “why?” and “shame on him!” were all but muted by unanimous praise for Robin Williams—the joy and laughter this human genie was capable of giving his audience.

Taking no Sides, a Lesson from the Edhi Foundation