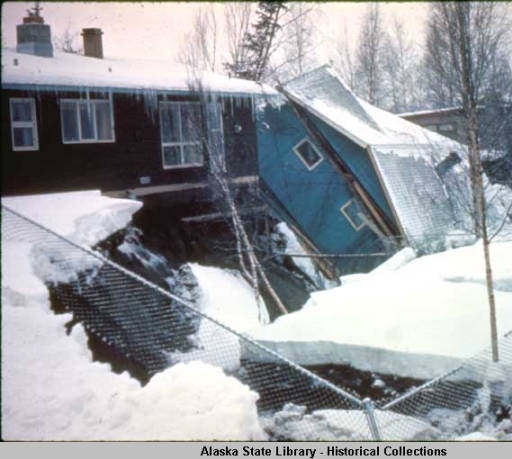 Laughter doesn’t come all at once when you’ve narrowly missed falling off the edge of a precipice.  It comes in short gasps, in nervous trickles before settling into a chuckle of good humor. Quirky things begin to surface that slowly seep in for the irony or peculiarity. For us, it was dad’s birthday cake. His birthday was the 28th, the day after the Good Friday earthquake. I had already baked him a cake on the 26th and it sat proudly on a plate, a shiny metal top covering the decorative frosting that hovered between lavender and gray.

It was the earthquake that brought the cake under close scrutiny. The cake had been placed on the refrigerator, either waiting for the proper moment to be served, or in the hopes that it would be forgotten so another delicacy could be served instead. When the quake hit and kitchen utensils were dangerously juggling for air space and the refrigerator did a break dance slide, the lid flew off the cake, the plate slid out from under it and crashed to the floor, but the cake remained, bobbing around like a lavender top hat. When we examined it afterward, the cake didn’t have the decency to show a single crumble. It sat there, perfectly intact, a triumphant survivor of the wreckage.

Nobody was sure they wanted to eat a cake that had shown so much strength and determination, but dad’s birthday rolled around and there was no question of eating anything else. It was there. It was food we could not afford to waste. It was served up with some candles and best wishes. Only, when mom cut the cake, it bent under the knife like a sponge, then sprang back up pertly when she was finally able to carve a piece. Surprisingly, it didn’t taste that bad, but still we picked at it with our forks as though it was an alien life form. Then… I believe it was dad who chuckled first. Nobody else would have had the nerve to break the sobriety. When he did, the laughter began, and the jokes and a brightness that had gone away for awhile.

Our second good laugh came the day the newspapers returned into circulation. Along with the stories of the tragedy, there were humorous ones. In 1964, the Fourth Avenue of Anchorage was heavily populated by bars and taverns. It was also located close to the waterfront. When the furious quake rolled in, it began snapping long swaths of waterfront real estate, sliding it into the inlet or leaving it ruined with massive fissures. In the case of Fourth Avenue, it was cut away from the mainland and buried. 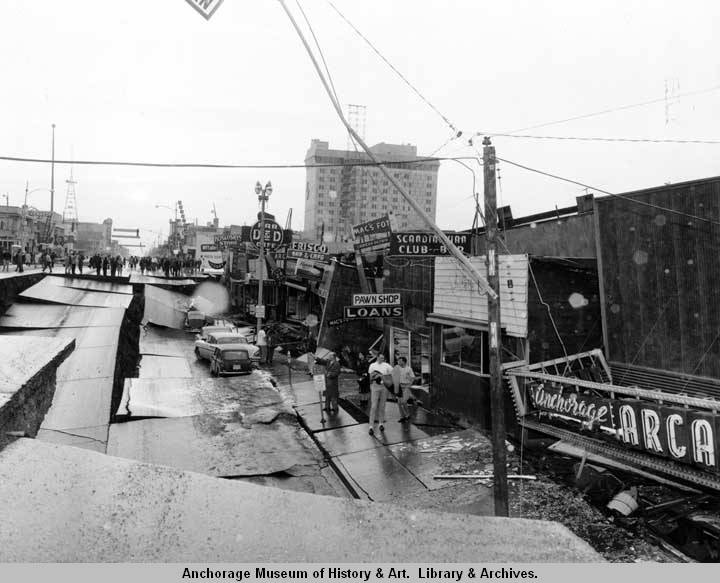 Fortunately, the buried bars did not collapse completely and there were few fatalities, but as rescue workers began liberating trapped victims, they found at least a few converts to the holy vision. One man who took his rescue rather reluctantly, thought that he had died and gone to heaven.

Another sat dazedly to tell his story. “I had just taken my wife shopping and thought I’d stop by for a drink. One little thing came to another and bye and bye a friend came around and started jawing at me for getting drunk on Good Friday. I told him, if I’m drunk, may the earth open up and swallow me!” His voice dropped to a whisper. “Then it did!”

Rockin’ and Rollin’ to Doom

There were at least as many deliverers to salvation as there were converts. The fiftieth anniversary coincides with fifty years of Beatle mania and some might say this is not coincidental. In fact, from what the salvation shepherds were saying, there was a direct relationship between the two.

Like a normal young girl bent on making a separate generational statement than my older siblings, the adults listening to Perry Como and Bing Cosby and even the red lipstick, flounced skirt, leather jacket crowd, I endorsed the Beatles whole-heartedly. I had cemented myself in front of the television set the night they made their debut on the Ed Sullivan show, which was an immediate tip to my parents who had never known me to take much interest in the rigid back entertainer, my bedroom walls were plastered with Beatle posters, I sported a shiny vinyl cap and go-go boots, and had scrawled in big letters, “John, Paul, George and Ringo” all over my notebook binder.

Times magazine aided and abetted the growing group of church leaders suspicious about Liverpool influence on adolescent American girls. There was indisputable evidence that the Beatles wanted to do more than hold our hands. They had made a scandalous, blasphemous statement that they were more popular than Jesus. Of course, the content of the article explained more youngsters were listening to their songs than paying attention in church, which was true. I had deliberately stalled in getting ready for youth group so I could watch the grand entrance of the Beatles on the Ed Sullivan show. However, I was not prepared for what was said next. The young girls who had neglected their spiritual development had caused the earthquake by following the Beatles. I had caused the most momentous earthquake the world had ever seen? Wow. That was some food for thought. 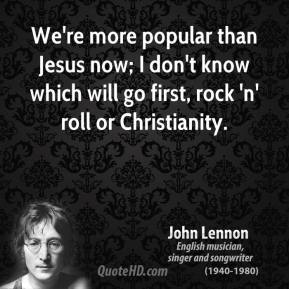 I decided, after some deliberation, that this really couldn’t be true. If the Beatles were at the core of this ground shaking movement, why didn’t England rock and roll its way into ruins? Why weren’t the Beatles themselves struck down and carried below the earth? This seemed a rather round-about way of telling young girls not to twist and shout. Also, a little extreme. I placed my bets on the guy who had invoked the wrath by calling on the ground to open up and swallow him.

We’re All Shook Up

“Say did you hear about the tragic love affair in Anchorage? He couldn’t marry her because she lived on the wrong side of the crack.” So began the storm of jokes triggered by the earthquakes. Signs were placed in store fronts stating, “closed, due to early break-up”. A popular fountain drink that combined all the flavors into one was called an “earthquake.” A housing development that promptly sprang up in a subdivision of the Turnagain Arm that had been completely destroyed by the quake was called “Earthquake Park” by the locals. It was also referred to as the real estate agent’s dream. Once natural disaster destroys it, rebuild and bring in some new clientele.

Some of the humor we saw in the path of the disaster, itself. A street sign announcing “no exit,” perched precariously over an open pit. Some houses were split directly down the middle, with one half still standing with its display of rooms, with the other half apparently undisturbed by its amputation, settling eight feet below. It added a new meaning to “split level”. 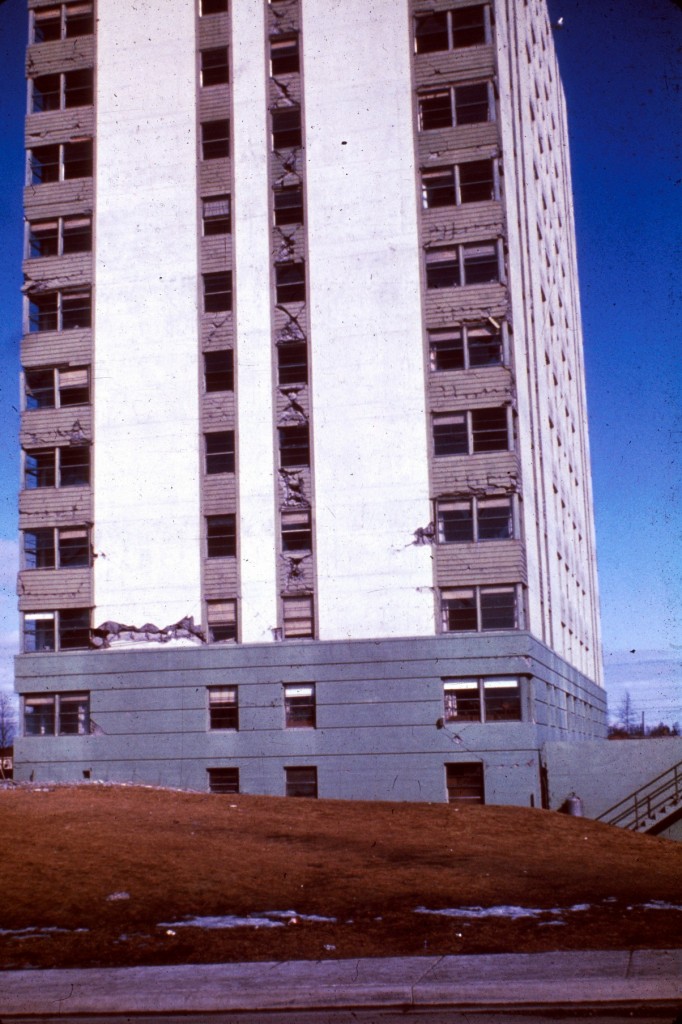 One of the tallest buildings in town, the McKinley building, caused a little amazement. The building was intact. In fact, it didn’t seem to have suffered much structural damage, but every one of its windows was cracked with a sprawling “X”. It was as though a giant had come through swinging a hammer and had methodically smashed in each window. The building was boarded up for awhile, but eventually it was refurbished and all the windows replaced. It still stands today.

Alaskans have long memories. Few will enter the earthquake marked building or buy real estate where landslides and open faults had once left their warning of geologic destruction and none were overly amused when the 1974 movie, “Earthquake” came to town. Of course they had to see it. The movie, concerning the possibility of a mega-thrust hitting Los Angeles, was advertised in surround sound so realistic, you could feel the vibration of the temblor.

What they didn’t count on was their reaction to the realism. When the rumbling began vibrating through the floor, every single person who had experienced the big one, either sat forward tensely or stood up. Some even walked out the door.

Those who had drifted up north during that ten year period following the Big One were primarily amused that this generally unruffled population that drove bears away from their doorways by banging pots and pans, and thought walking a mile through a snow storm was a normal activity, would be so nervous about a synthetic rumble. They hadn’t experienced the waking in the middle of the night to an ominous rattling. They hadn’t sat in classrooms, bolting under the desks each time the windows shook. They hadn’t immediately stopped what they were doing to pause and brace themselves for the next shattering impact. The memory of those turbulent months that subsided as the earth slowly settled back to its quiet ponderous movement was imbedded so deeply that even those who had been very small children when the Great Quake occurred, were ready to leave the theater.

It took a long time for Alaskans to find any humor in seeing the bejesus scared out of them at the cinema, but they managed. Eventually they could even put their foolishness in a lighter perspective. Humor is the relief we feel when we realize things aren’t as bad as they could have been. It’s the healing force that turns fears into laughter. 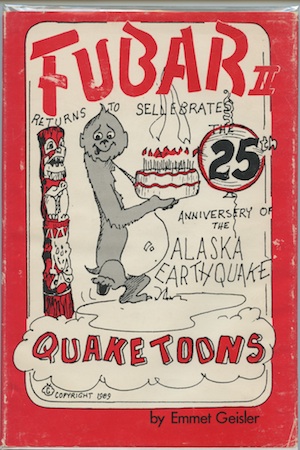 We acknowledge the fiftieth anniversary of the Great Alaskan Earthquake, but it’s not a true celebration. It’s a reminder that we live on one of the most volatile pieces of crust in the world, that our lives must be a mixture of stoicism and preparedness. It’s a reminder that development must be wise development, accommodating to our shifting landscape. We know that it’s never a question of “if another major earthquake hits”, but when it will hit.

The Great Earthquake taught us many things about ourselves. It taught us we were a resilient society, a people who could pull together even when damage was wide-spread. It taught us how it felt to be on the brink of a chasm… I believe we all realized something in those moments. When something as tremendous, as forceful, as relentless as nature demonstrating its awesome powers is in front of you, you sincerely hope somebody is on your side.

Karla Fetrow: In the aftermath of the 1964 earthquake, Alaskans regained their sense of humor.

A Simple Solution for College Athletics.