Masquerading for a Halloween Wedding 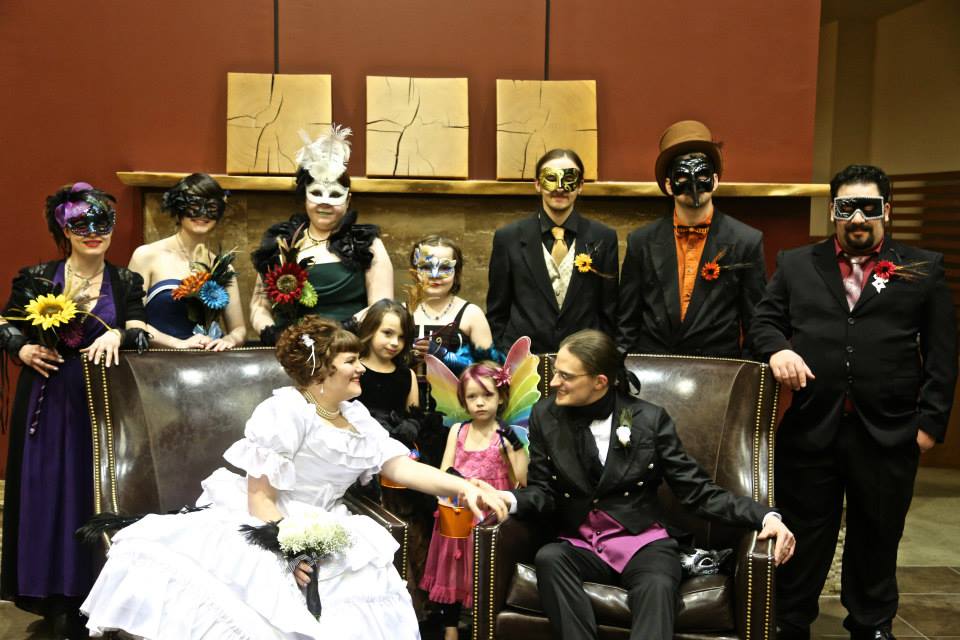 In the streets of Anchorage, Alaska, ghosts and goblins, ghouls and zombies, werewolves and vampires scampered through the streets demanding sweet offerings as penitence to avoid being tricked. Beneath each facade, peeped round, guileless eyes, and small, clumsy hand clung eagerly to each growing bag of loot. In the stores and restaurants, salesgirls, waiters and managers had magically been transformed into aliens, ghouls, witches, gypsies and long-tailed cats.

High above the streets, in a cream colored ballroom, black laced table-cloths spread out on banquet tables, with vases of bright autumn flowers and feathers mounted as center-pieces. There was a different atmosphere here; one that celebrated the past with the whisper of formal attire, harkening back to earlier centuries of Southern belles, gay nineties dancers, swash-buckling pirates and successful mobsters. Long-tailed suit jackets, top hats, flouncing skirts completed the ensemble, while pixies flitted about, seeming to swirl in glittering fairy dust. 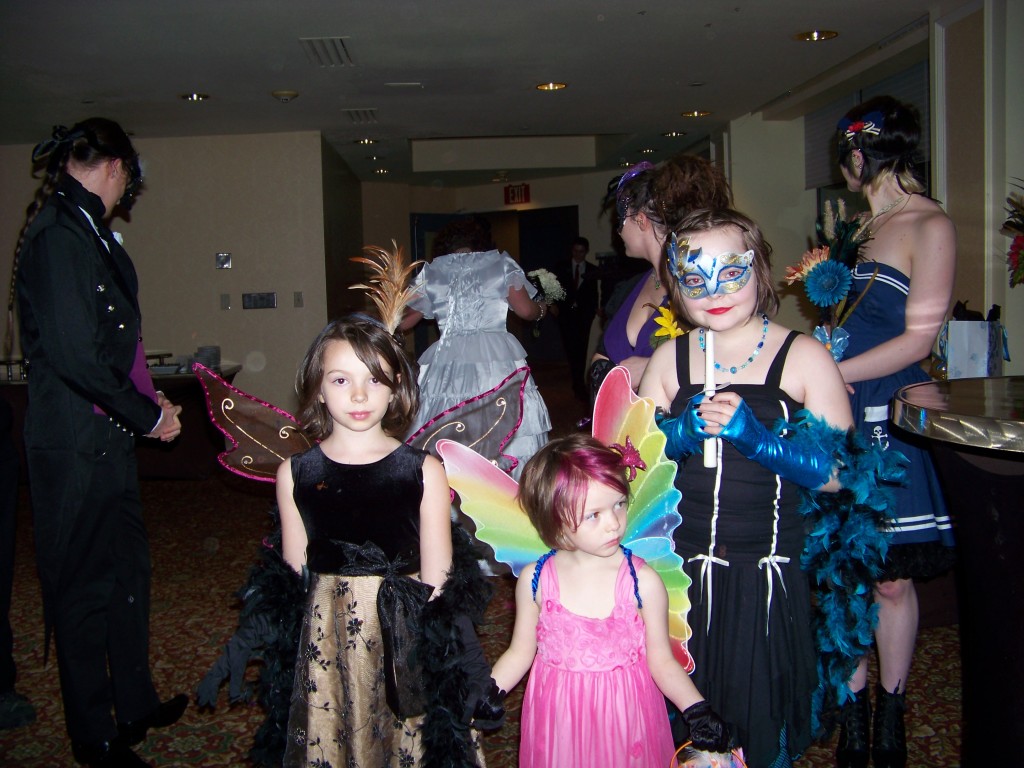 When I learned that my daughter planned to hold a masquerade ball on Halloween for her wedding, the first thing that came to my dismally macabre mind was Edgar Allan Poe’s, “The Masque of the Red Death”. Not wishing to put a damper on her high spirits or somehow inadvertently jinx the occasion, I said nothing. Fortunately, the wedding was a far cry from this grisly scenario. It was more like the goblin king’s dance in a bubble in the unforgettable movie, “The Labyrinth”. In fact, the goblin king’s theme announced the march of the bride drifting down the aisle. 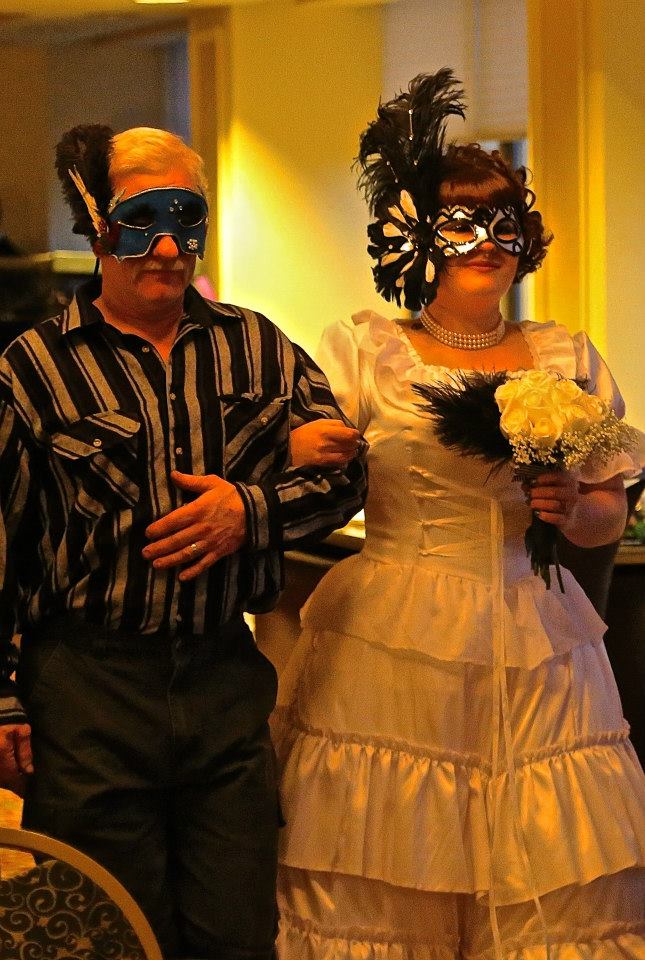 Regina explained they chose the date as the second anniversary of when the couple first started dating each other. They chose the Sheraton hotel because it was across the street from the cemetery, and she wished to invite the spirits of loved ones who had passed away to join the joyous festivity.

We visited the graveyard the day before the wedding, after the rehearsal. I had thought to set the mood by snapping a few photographs, although Regina was just a little worried about the spirits being in compliance. “Do you think they might find it disrespectful?” She asked. Oddly enough, although I took several pictures, only one registered on the camera; some Canadian snow geese waddling among the head-stones as though they owned the place. 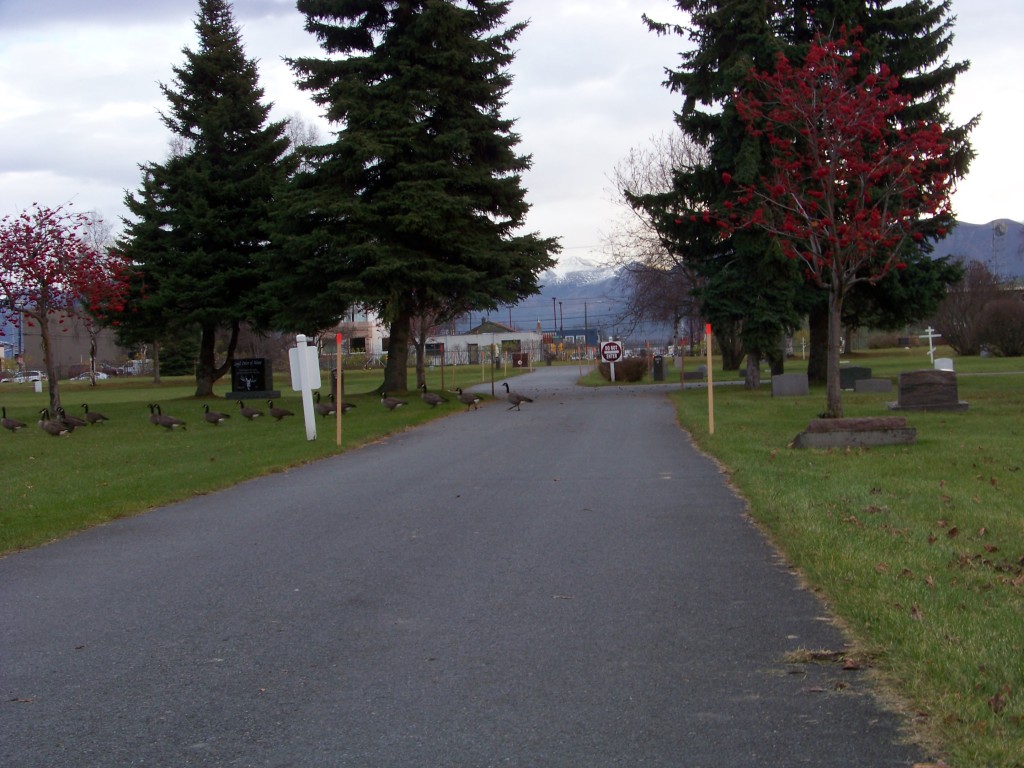 I thought there was something wrong with my camera and checked it when we returned to the hotel. There wasn’t. I had absolutely no trouble photographing a view from the twelfth story window. I was simply banned by some unseen power from photographing the graveyard.

The two hours of getting ready for the gala event was as festive as the wedding itself. The package deal including a conference room that easily accommodated all twenty members of the wedding party, with a private bathroom that had giggling young heiresses, princesses and sprites prancing in and out. 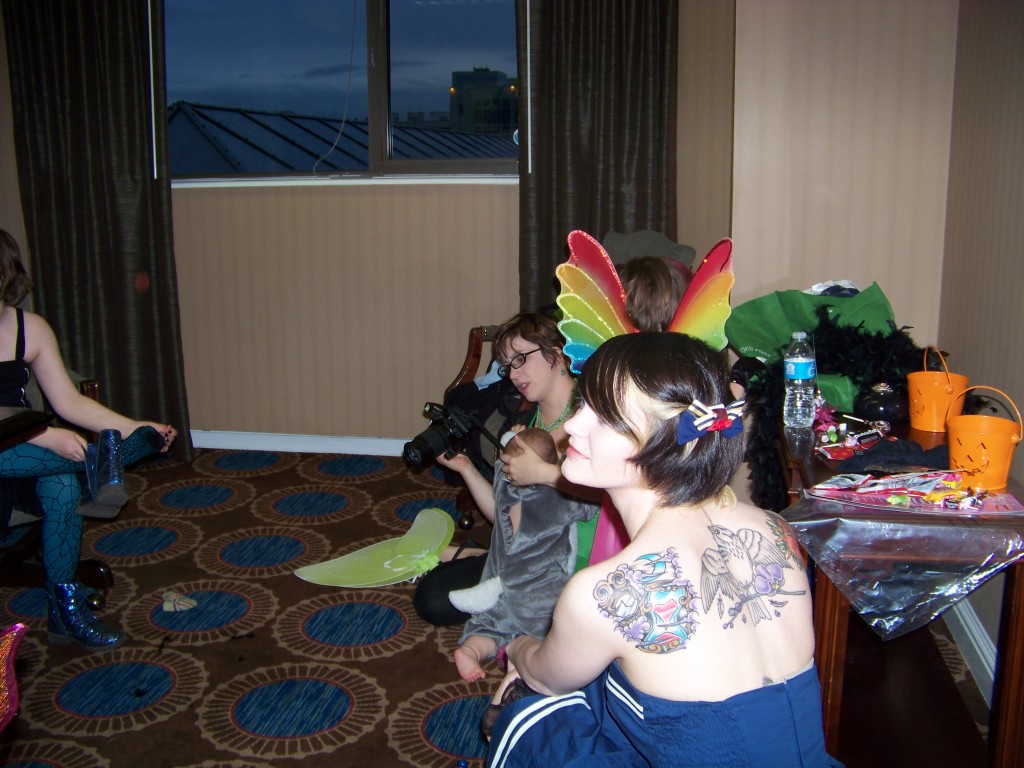 There is something wonderful about a masquerade ball that isn’t available for any other type of wedding. You get to dress up in the most regal attire your heart graves, without regards to modern fashions. The chiffons, silks, velvet and satins reflected period gowns from the eighteenth, nineteenth and early part of the twentieth century. The masks were nearly as exotic as the gowns, with sequins, swirling patterns and feathers. Tiny hats with sprouting feathers were the popular additions of the ladies and classic eighteenth century masks were favored by the men; well, at least those who didn’t come as swash-buckling pirates. There were enough pirates to highjack an ocean liner.

Regina felt a masquerade ball wouldn’t be complete without at least one Anonymous mask so I volunteered for the role. I felt rather elegant in a gray silk jacket and long velvet skirt and swept through the hallways like a 1920’s reporter. At one point, I got on the elevator to ride down to the lobby. There were several young servicemen with their luggage, also taking a ride down. I smiled at them pleasantly and nodded, although they did not smile back, only looked at each other with a little anxiety. I thought this was somewhat puzzling behavior until we reached the bottom and I suddenly realized I was still wearing my Anonymous mask. They couldn’t tell if I was smiling or not and possibly felt my mask was making a hostile statement. 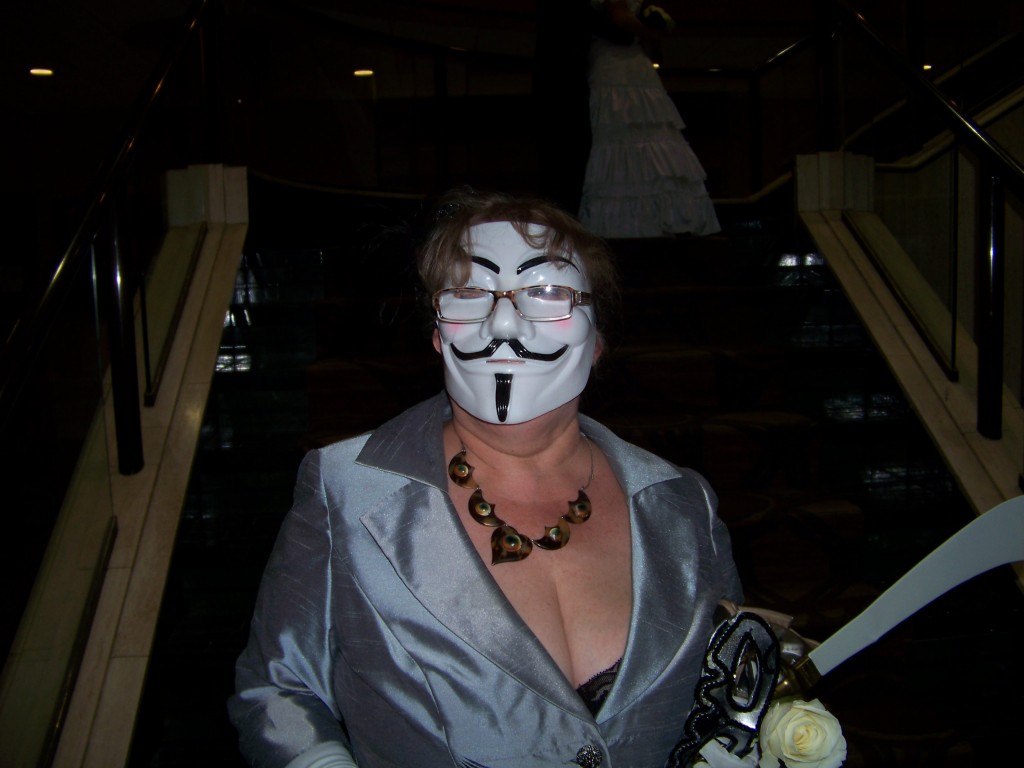 Regina’s wedding attire was a beautiful, Southern belle ball gown that would make Scarlett O’Hara envious. She said it made her feel like a princess, and as she walked down the aisle, she looked like one as well!

The gala event lasted well into the night, with a magnificent banquet spread out that included seafood platters, roasted lamb and a variety of garden vegetables. Several of the guests had taken advantage of the discounts offered for the wedding party and rented rooms for the night. Even after the ballroom was closed, there was much shifting from room to room, with what was left of the party eventually ending up in an exclusive pent-house styled suite on the top floor, with a long curving bar, overstuffed sofas and a Continental breakfast in the morning. My only regret was, despite an all-night affair, I wouldn’t have minded staying longer. 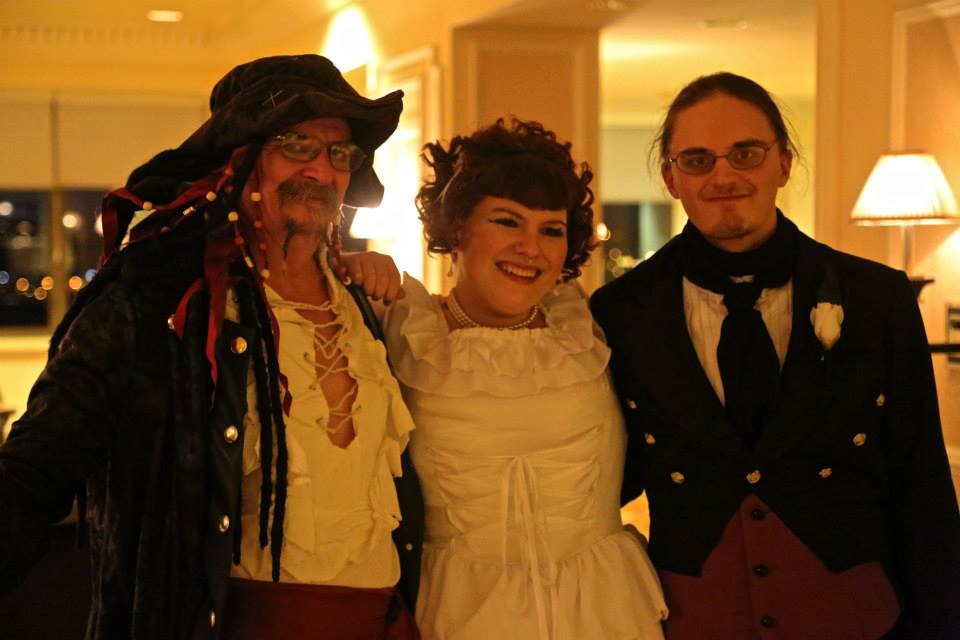 It may have been the most unusual wedding I’ve ever attended, but it was also the most elegant. As the season rolls away into long winter nights and the bright shine of Halloween fades away, I reflect there really did seem to be more dearly departed spirits joining the festivities than accompanies the normal fare of zombies and vampires. I wonder if perhaps even the dead would rather remember what was beautiful and magical, than the dark tunnel of fear and horror. I have come to the conclusion that with or without a Halloween wedding, there should be a masquerade ball every year. 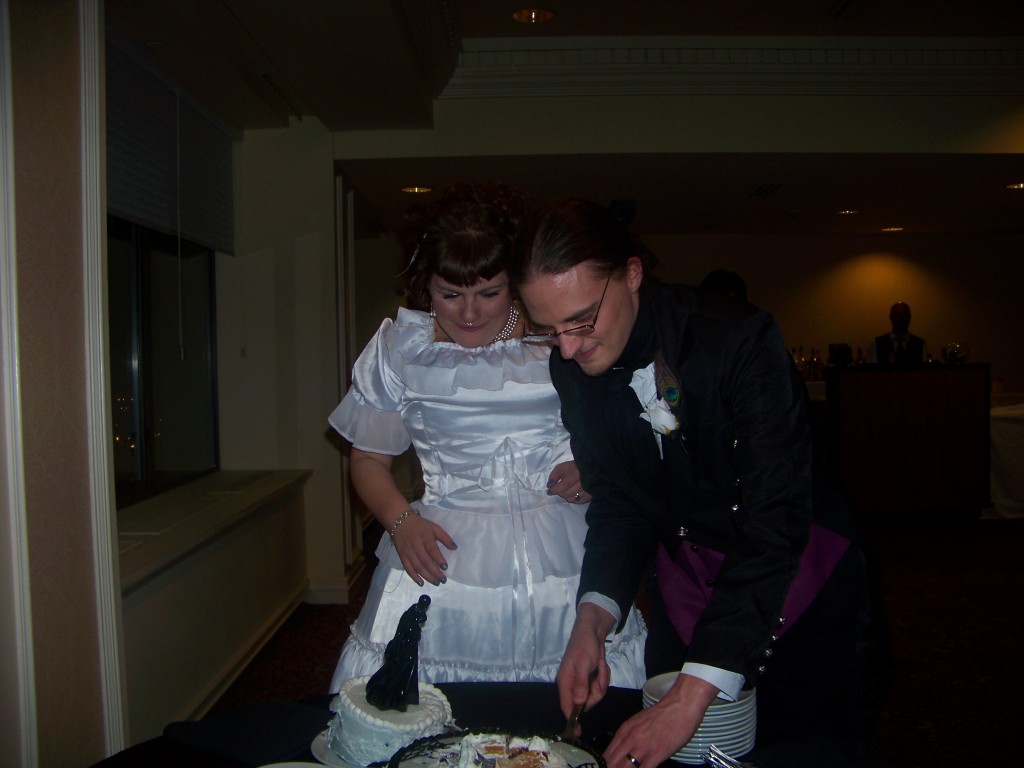 The most unusual wedding of the year was a masquerade ball on Halloween.