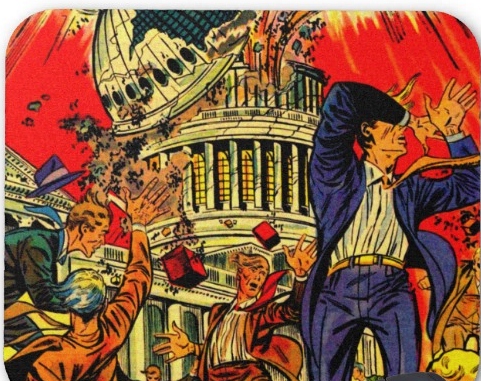 On October 17th we have been informed that the United States will be reaching its credit limit and as a result all manner of catastrophe has been speculated.

According to the Huffington Post- “The very definition of financial risk in much of the world is predicated on the notion that America will never, ever default on its debt.”

This in fact,  is fucking stupid because Americans practically make a pastime of defaulting on Debt.  Ask Donald Trump, he made a fortune doing it.

“Absent a congressional debt ceiling hike or Obama debt ceiling magic, the U.S. will be missing bond payments by the end of the month, plunging the world into turmoil and chaos.”

Huffington post recommended “arming yourself”.  To be fair, the article was satire, although it will likely never been seen that way by most of the people reading it.

Although their suggestion to plant a survival garden I can completely get on board with.  You should really already be doing this. http://www.survivalseedbank.com/

They also gave a reading list suggestion to which I say: screw that, start memorizing shit.  Didn’t anyone watch The Book of Eli?

Where they really screw up is in telling people to leave their guitars at home. I inferred this to mean all instruments.  Clearly they never spent their childhood listening to the teaching of Pete Seeger who taught us all quite clearly “The musician always gets the seat closest to the fire.”  (See Pete Seeger’s Children’s Concert at Town Hall)

But don’t worry too much; we won’t actually hit a ceiling until February-ish according to an analysis by the Bipartisan Policy Center.

Before you going running into the night remember there are things about hitting a ceiling that could be good for America, things that will wake us up (maybe)

Like, the possibility that the government will have to honor debts to other countries and banks rather than taking care of its people.  People aren’t going to want to hear “You aren’t going to receive your veteran’s benefits because we owe the Chinese.”

Nobody likes to have to make budget choices. However people need to be aware of just how much we have overextended ourselves in the constant quest to appear to be the largest superpower on earth.

In addition we might all learn some constitution.  Like do you know the ins and outs of The 14’Th Amendment?

You may find out if the President (who has said he unequivocally would not-but you know…your dad said that about your grounding too) There is a provision to allow the president to keep paying with what amounts to magick money.  Actually it states that the debt of the United States Government, lawfully issued will not be questioned.  Either way- magick!

This likely won’t impact anyone because we have been living on magick money for a long time now.

Or there’s the Platinum coin option which would allow the President to mint a trillion dollar platinum coin which we imagine would then be sold on QVC in between chocolate fountains and holiday sweaters. Again, magick money.

Or you know, we can go with Ron Paul’s plan and Abracadabra!

Speaking of magick, financial wizards, and I’m calling them that for a reason because I believe they practice dark arts, believe that hitting the debt ceiling would mean actual greater debt for the coming generations.

When have we ever cared about the upcoming generations?  However, who doesn’t want to see Mad Max and a Thunderdome situation happen?  Why let Australia have all the fun?  We are already halfway there!

While scaring people is fun and especially at this time of year, a lot of the information is really not being related in a…shall we say “truthful” fashion.  Many reporters and pundits and politicians are reporting that SSI would be cut in order to pay our debt which is highly unlikely to happen as it is a trust fund that is completely separate from the other debt we are talking about.  To do this congress would have to vote to steal from SSI (or disband it, use whatever language you like). This is highly unlikely to happen because they know scared oldster watching CNN religiously are the ones who vote for them.

Other scary campfire stories being told are of commies taking over making us all share stuff, which actually makes no sense as the most likely thing to happen is more contracts to private parties making the rich richer and the peasants more peasant-y.  While I’m on that subject, I’ll just point out that Obamacare is not in fact communism or socialism either.  All medical insurance contracts are being handled by private agencies.  Which begs the question: Who isn’t getting their promised kickback, because really, the GOP admitted to agreeing to this stuff and pulled the plug at the last minute?

Forbes Magazine recently reported that the Feds actually reached their debt ceiling about four months ago. So really, why worry?  There are lots of real world ways to fix this like…I don’t know…ending the “shutdown” so the IRS can get back to collecting taxes or something.

You know, we could also just hold the paychecks of people not willing to play well with others in Congress.  But that would be too reasonable, no?

Oh and also, this isn’t the first time this has happened.  It just sounds really really scary to the rest of us, because when we reach debt ceilings (or any ceilings for that matter) it hurts us a lot more. (Because we don’t have magick)

What we should be more concerned about is the fact that we have a bunch of egomaniacs that are purposefully trying to scare everyone into submission and we voted them into office. It scares me that despite the fact that the GOP is clearly responsible for the “shutdown” (Not to mention House Majority Leader Eric Cantor(R) is the only one who can end it )and the possible “debt ceiling” most Americans believe that it is the Obama administration’s fault for wanting to ensure that uninsured Americans have basic health care.

Ceilings are terrifying places to be hitting, especially if you’re being crushed by something, like debt.