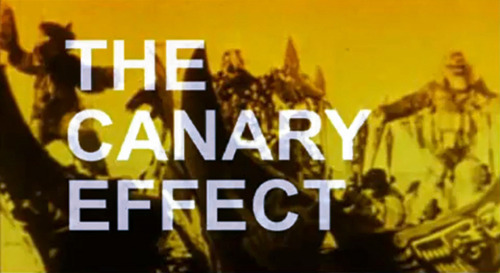 Yellow Thunder Woman is  a musician, artist and activist; not necessarily in that order.  Most recently she has been playing with her sister in a duo dubbed Tone Def Sirens.  But before all that she partnered with Robin Davey a master of putting all sorts of media together, on several projects including The Bastard Fairies.  A group that wrote produced and shot video for the entire project.  And they were damn good.

One of the special things to come out of the Yellow Thunder Woman/Davey collaboration is a documentary on Native American policy throughout American History: The Canary Effect,  which won a Stanley Kubrick award at  the 2006 Traverse City Festival.  Up until this year it has been notoriously hard to find.  It was shot on limited budget with a limited release mostly at film festivals and art houses and even there the run wasn’t very long.  To watch it, one had to buy it from The Bastard Fairy website and even then, they didn’t always have it.  So I was very enthused to find that they had released it around the time of last Columbus Day on YouTube for all to see.

But to understand the film, we must first visit what exactly The Canary Effect is.  In mining terms, a canary is life.  Before there were computerized gages and detectors, the best gage of whether or not air was breathable deep within the earth was a living thing.  Most often a canary would be carried in a cage but sometimes other small animals, rodents, even cats.  Smaller animals succumb to the poison gas of the air quicker so when a canary dies it’s time to exit stage left, fast because you are already standing in a death zone. The canary is literally the signifier of life.  The canary effect then, is to pay attention to what is perishing around you because where those things have perished you will soon surely follow.

The film opens with a quote from Felix S. Cohen-

“Like the Miner’s Canary, the Indian marks the shift from fresh air to poison gas in our political atmosphere and our treatment of the Indians, even more than our treatment of other minorities, reflects the rise and fall of our democratic faith.”

Truly, in this time in which so many are struggling, we tend to forget the great debt that we still owe the Native Peoples of this continent.  The broken promises, quick detentions and systematic ending of their collective cultures should have been a warning to us all.

In an interview with Senator Inoaye, who sat on the Indian Affairs commission, he points out that (as of 2004) there had been a marked rise in debilitating health issues for most Native Nations.  Including:

Once again the parable of the canary plays out as all of America has followed suit, most notably, those who are at and below the poverty line.  But frighteningly, increasingly “middle class” Americans are experiencing poorer and poorer health.

As most of us are aware, the American government practiced a policy of genocide against the Native Nations followed by a systematic cultural annihilation all the way until 1925 when the last school/orphanage for Native children was (officially) closed.   By 1890 98% of the entire native population was gone.

And yet, we still celebrate Columbus day as a Federal Holiday. This is more than the populations of Jew, Romany, Mentally handicapped, elderly and friends lost in WWII to Nazi concentration camps.

But lest we think this is all in our past, the film points out that under an act written by George H.W. Bush, 42% of women seeking health care were sterilized without their consent in the 1970’s.  Also we continuously practice a policy of colonialization via reservations which today are ministered to and in many ways controlled by Christian churches.  Firmly entrenched are the Catholic Church, Methodists and Presbyterians.  They hold the keys to food distribution, medical aid and other social welfare.  The churches very often require attendance and proof of prayer and membership to receive aid.

Let’s take a minute here and remember, George W. Bush also wanted churches to be in charge of social welfare distribution for all of us.  This is an idea that didn’t fly at that moment but has not died by a long shot.

Speaking of Presidents, President Clinton was the first president in 50 to visit a reservation; in 1999 he visited Pine Ridge. That a President of this country should have what amounts to colonies within the country and fail to visit them in his or her official capacity shows how little they think or care about their people.   President Obama has yet to visit a reservation and is in his second term.

Speaking of Pine Ridge, when this film was made, a reservation that contained 3200 souls managed to hold an arrest record of 11,768 in one year.  This, in a 22 bed facility.

Still think the Canary effect isn’t alerting you to anything?  Check the arrests in recent years in your own community.  Also, check what sorts of arrests are made.  Chances are, there will be an increase in things like; Public Drunkenness, Loitering and Vagrancy.

What we have seen should be concerning us.  Lack of resources, dirty water, depression, alcohol dependence, generational suicide trends.  Yet, it has been so easy for us as a nation to look away from all of this.  The point of this film is we should not be.  When the society becomes so poisonous that it allows its people to perish with no help and coverage; everybody should be afraid.  The Native Nations are only indicators.

And indeed we all acted in shock when hurricane Katrina hit and relief response was deplorable.  The world reported on this.  When was the last time you saw any news outlet remind people on a regular basis that Dirty Water and lack of Sanitary services is the norm at many federal reservations .  News outlets and activists regularly report on the human rights violations in Prisons as well as the “fact” (which is in fact questionable) that the bulk of young black men are in prison.  However, do you remember hearing anything about the fact that Prisons currently receive two times as much in federal funds for health care as compared to reservations?

When there are services on Reservations and for Indian Health Services, very often the providers are not behaving ethically.  Sexual abuse has been reported and ignored as well as reporting violations.  Notably mentioned in the film was the case of a youth who posted an entire plan in animation on line to commit violence against fellow students and finish with suicide at Red Hook High School (MN).  Eleven were left dead following that event with no media coverage.  But later, the nation was in shock when Columbine suffered the same. (See how I don’t even have to put a state name?  You know where Columbine is. ) One of the biggest problems was the fact that the youth warned people via internet, unlike Columbine and was receiving Mental Health services and should have been reported but were not.

If you are still feeling like the Native American is not a Minor’s Canary for you, after all, they are getting on top with all this gaming money they can keep; think again.

The federal government has been refusing to cover college costs for Indian run colleges considering the gaming money adequate for higher education coverage.  But that’s not all, they also regularly introduce bills to try to tax Indian gaming stating the Indian gaming commissions want this and need it, a clear lie.

Contrast this to the rest of America where college funding has been cut by 1/3 in the federal budget, professors are out of jobs and middle class Americans who no longer qualify for any aid are now starting to counsel their children to learn trades because college is fast becoming out of reach, a place for the elite.

As the film states, “The Distance placed by the white society is a danger to us all. We continue this behavior overseas where we see 500,000 plus children dead in Iraq due to sanctions.”  (Also, since this film was made we have sanctioned several other nations and people of all ages continue to die because of it.)

“White people don’t seem to have the depth of understanding.” (That it isn’t okay to decimate a people.)

This is what ultimately will bring us all down.   We love to turn aside and not see the warning signs that could and should help all of us.  By ignoring those amongst us bordering on social and cultural extinction we set the stage for us all to follow.

To watch The Canary Effect in its entirety, visit Subersify Viral where it is now up.

A review with commentary

How was Syria before the war?