At the UN, anguished SOS for JOURNALISTS TO STOP the KILLINGS of in MEXICO 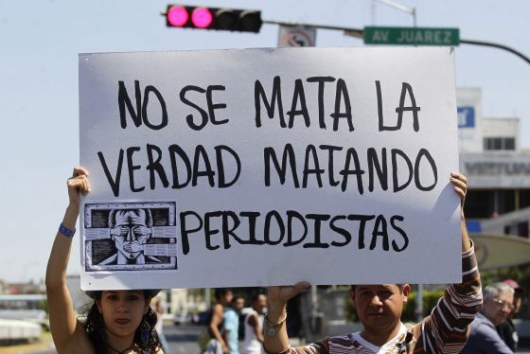 Always fair and consistent with this urgent fight to defend our rights to freedom of speech, press, and above all our lives and dignity, let me play today as integrates a speech this morning at the UN in New York, for Proceso reporter Marcela Turati, in the event “Freedom of speech”: ensuring the safety of journalists and media workers “, opened by the UN Secretary General, Ban Ki-moon on the occasion of World Freedom of the Press.

I am a Mexican reporter, like many, concerned about the situation in my country, classified by Freedom House as free country for the press.

We, the reporters, I find every day.

When a politician announces that a photographer should go to jail for the photos you took.

When a reporter gets a call from a drug dealer, or captured and tortured, to learn the kind of news that you should not write.

When the owner of a media, or a director, or an editor, mandates that certain political or religious or entrepreneurs should never be questioned.

When a newspaper, radio or television stops reporting on violence.

When the body of one of our own, abandoned on any street as a garbage bag, tortured, beheaded, next to a sign that says: “This is because they wrote the wrong thing.”

Mexico is listed as one of the most dangerous countries for journalists. It also is among the 10 countries that crimes against journalists left unpunished, according to the Committee to Protect Journalists.

The number of journalists killed or disappeared in recent years is more than 70. It is a high number for a country that calls itself democratic, for a country at war not formally considered. Although Mexico is at war. Mexican reporters we become in recent years, especially in the period of President Felipe Calderon in war correspondents in our land.

But the Mexican War is different. No minefields, people die in crossfire. In Mexico there is a hunt of journalists. Those who feel inconvenienced with the information journalists bring to their homes or even their offices, will kidnap, torture or kill them.

As in any war, you want to control the territory and the population, in the Mexican War this makes enemies of journalists. The logic is to stop. You stop counting the number of dead. Let them not say who or how many died last night. Let’s not talk of the disappearance of persons. Do not point out human rights violations. That information is stored on the shootout that ended in panic to the population.

They are not random killings, there a hunt of journalists.

If before the problem was corrupt rulers who did not accept reviews, now is the organized crime that is taking political power by co-opting or subjecting the economic power, taking the police, but to have complete control need to control the press. So that people do not know what happens.

With so many journalists killed, missing, silenced, threatened, and attacked; it is striking to learn that the Mexican government agreed to be one of the pilot countries of the Action Plan of the United Nations on the Safety of Journalists and the Question of the Impunity. That is symptomatic.

The murders continue all the time. But these deaths are lost in the mass grave where they end all killed. Journalists face the same fate of any citizen, because their deaths are not investigated. And, worse, impunity mechanisms are activated to blame murdered journalists for their own death; it is believed that in “bad thing walked” suspicion was sown with nobody around to ask for justice.

The most important journalists are not citizens but we work with a public good that is information. Right now at risk not only freedom of expression, is also at risk the right of the people to be informed. The right to know why what happens happens. The rights to make decisions like why not cross streets to find no shootings when carrying children to school.

Therefore it is essential to end impunity for crimes against journalists. And always, in all cases, the application of a research protocol that runs as the main line of investigation, the victim’s journalistic work performed.

A physical murder victim, who was also victimized after murdering his honor, is Regina Martinez, Proceso magazine correspondent in the dangerous state of Veracruz. The only line of investigation that followed was that of theft, even though she was a powerful voice, brave, denouncing political corruption and organized crime. She was complicit citizens.

Impunity mechanisms always require the tarnishing of the good name of the murdered. Sow suspicion and fear, lest anyone ask justice for colleagues not organized. This has been done investigative journalism. When the press is silenced, society loses his eyes, his ears, and his mouth. It is helpless.

In Mexico impunity reigns. The crimes are not investigated. The police and prosecutors investigate not know, or do not want or cannot because they do not solve cases. The administration of justice depends on the state ruling, there is no autonomy. Often responsible for investigating these crimes are murder suspects. In Mexico’s culture of impunity.

So it is urgent to begin to solve the crimes against journalists and human rights defenders. At least address these and send a message that no one should dare to silence them. Because impunity is a gun without insurance.

Citizen is much anguish of not knowing what happens in their environment that has been a phenomenon in various regions of the country where citizens take the role of journalists, create blogs, open Facebook pages, upload videos to Youtube trying to report what happens , doing what journalists cannot, but that, to some, it has cost and life threats.

There is another phenomenon that is not spoken; it pays to impunity, and the corrupt media relationship with power. The government rewards those who are faithful to him and punish critical media. The lack of transparency in the allocation of advertising is the weapon with the rulers to silence the press. Media critics are isolated, against the wall and at constant risk of disappearing.

This report was taken to the Court of Human Rights by the journal  Process. This situation is part of censorship that exists.

As depend on the government, many media silent violence. Not interested in pressuring the government to the existence of new mechanisms for the protection of freedom of expression. No pressure to sign action plans as proposed by the UN, which the previous government did not sign despite its official opening speech to scrutiny and international cooperation. Despite the size of the emergency nothing was done. Although any cooperation strategy would have been a great help to improve the situation of the press.

The press speaks true to government violence. It conceals the dead. Play the game that asks the government. It also demands justice for their reporters; photographers killed or disappeared, to avoid an advertising boycott.

Many media are instruments serving as weapon to defend the interests of the owners and exchange favors.

Therefore, among journalists say we are between three fires: the rulers, the organized crime and defending business interests against citizens.

In Mexico it seems that nothing happens. It speaks of peace and no voices that say otherwise go because they are silenced. Many places are subject to silence. Increasingly, the place that we lose the signal, we do not know what is happening. And whoever dares to silence, we do not know what bothers. If there is a threat behind business interests, politicians, drug dealers. It’s like walking on quicksand.

Daniel Alejandro Martinez, the last journalist killed, just last week, was criminalized by the attorney general to investigate the crime a few hours before his body was found. The last journalist disappeared only in January, Sergio Landa, had received a threat because he published the murder of a taxi driver. The first disappeared, Alfredo Jiménez Mota, disappeared investigate a local drug dealer. Another missing, Ramón Ángeles Zalpa, by reporting the theft of minerals and the presence of loggers on their land. Regina Martinez may have been killed by any note uncomfortable.

Something is rotten in a country where journalists, like many I know, have made his will, his posthumous letter because they are monitored until they talk on the phone, because they are sentenced to death.

The situation is critical. This is an SOS to turn their heads to see Mexico, to disable impunity, the lack of transparency in the allocation advertising, press relations, to corrupt, to push for better working conditions for journalists because they are also security issues. It is necessary to empower the press, journalists, and thus citizens.

It is a call for help for not one more murder.

Testimony Proceso reporter Marcela Turati, in the event “Freedom of speech”: ensuring the safety of journalists and media workers “, inaugurated by UN Secretary General Ban Ki-moon on the occasion of the World Day Freedom of Press.