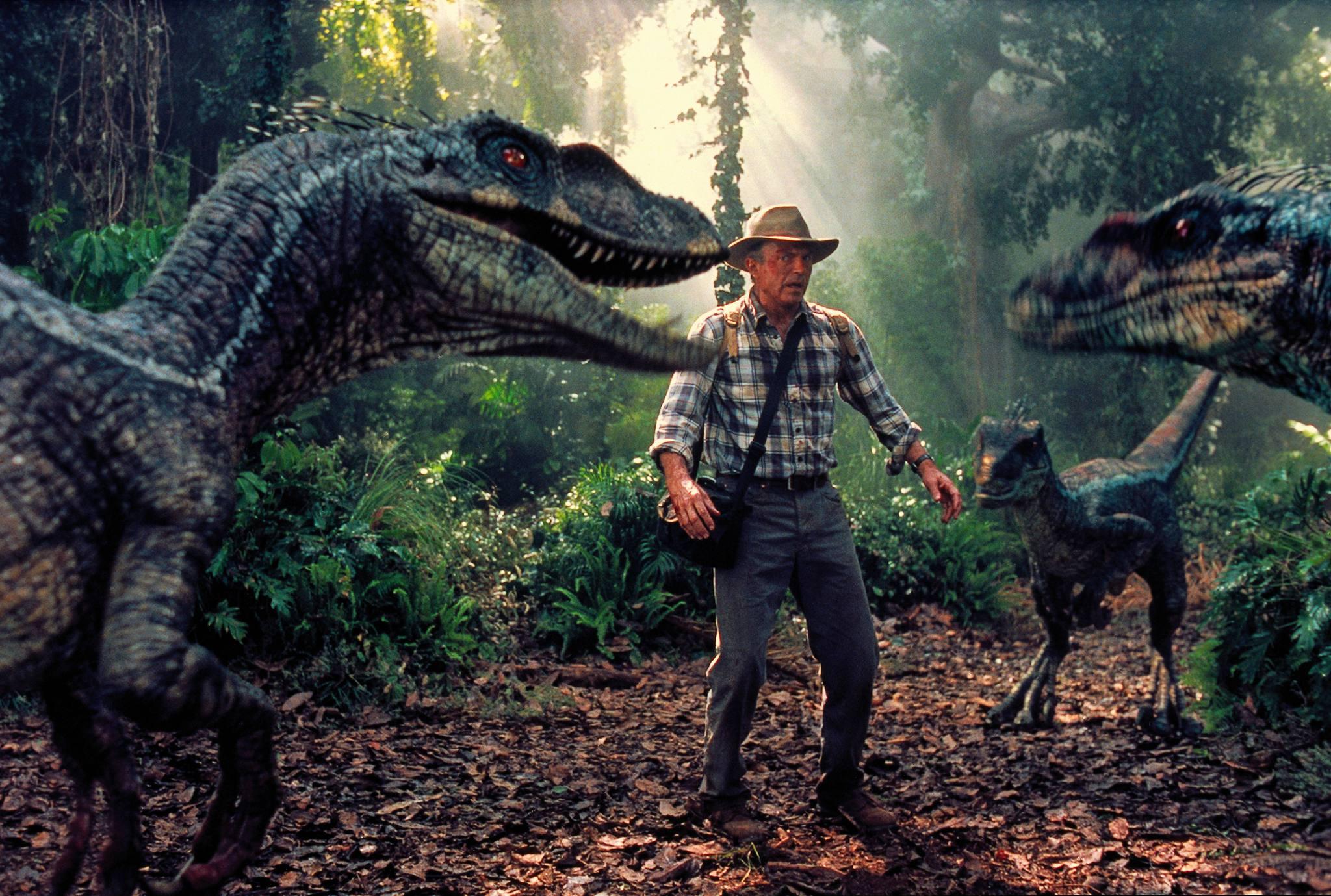 I will never forget the first time I saw Jurassic Park.

I was seven years old. My parents were still together, and when it became apparent how much I enjoyed the excursion to the movie theater, it became a family pastime that ranks among the few that I consider enjoyable when thinking back to that tumultuous of my life. I knew so little about the film going into it. As archaic as it sounds, my family didn’t really watch much TV back then, even in 1993, so I wasn’t aware of what was surely a mass marketing campaign for the film.

It was the first movie we had seen in the brand new Forum 8 Theater. Back then, the biggest theater in Columbia, Missouri was a 4-plex, so this was a BIG deal! I knew it was something special when walking in. It was the first movie I had been to that had sold out. While we made our way into the auditorium, it was apparent to see how the staff had gotten super zealous in preparations of showing Jurassic Park, as they had decorated the entrance to the auditorium with an amalgamation of jungle like leaves.

Then, it happened. I sat through the film that literally changed my life. As silly as that may sound, when the lights came up, I felt a level of exhilaration unbeknownst to me before. As a result, I became obsessed with the craft of filmmaking. I began my education at that point. I watched anything and everything, so as to feed my new fascination. Today, I couldn’t tell you what my favorite movie is, but when I was a kid, the answer was easy: Jurassic Park! It had awakened the creative strain in me.

Not soon after, my parents began divorce proceedings. Films became a landscape for me to escape into throughout that difficult time. My mom saw my new interest and began buying me VHS tapes. I ended up having quite the library. The only thing I had to do in return for these gifts, was  write a review or essay, explaining why I liked or dis-liked any new addition to the collection. She wasn’t just buying me Hollywood fluff. I was watching films by Hitchcock, Traffaut, Kubrick, Scorcese, and the Coen Brothers.

It was about this time that I first read the reviews of Roger Ebert. My mom gave me his 1994 Movie Yearbook and I read it front to back. It didn’t matter if I would never watch the film I was reading about. Every review made for some of the best writing I had been exposed to. I didn’t always agree with him, but I knew that if he ever gave a 4-star review, that it was a flick worth watching.

He gave Jurassic Park three stars. I remembered this fact as I sat in the darkened auditorium today, watching the 3D re-release of my childhood favorite. It was one I, of course, always disagreed with him on. To this day, I think of Jurassic Park as Steven Spielberg’s finest adventure film. Spielberg’s signature motif of fedoras and thrills were so expertly executed so as to make his jumbled, new age Indiana Jones and the Crystal Skull (2008) seem antiquated when re-visiting the dinosaur inhabited Isla Nublar. To me, Jurassic Park is the best Indiana Jones movie and with time it will be revered as one of Spielberg’s best.

There are few public figures I would ever shed a tear for upon their passing, but I always knew I would when Roger left us. I became more enamored with his writing once he began blogging. There, he was able to express his opinion on more than what was at the local Cineplex that weekend. Until 2012, he was the only person to win a Pulitzer Prize for Film Criticism. To me, he was one of the greatest writers of our time. A man whose voice only grew more poignant, truthful, and daring after losing his ability to speak. It didn’t matter if he was blogging about quantum physics, the absurdity of creationism, or national affairs; his perspective was one to be treasured. I never met the man, but I can honestly say that I loved him.

It seems of some strange coincidence that my favorite childhood writer passed away the same week Jurassic Park hit theaters again. As I watched dinosaurs come to life once more, a rush of emotions came upon me as I remembered how troubling the times were when I first saw the film. I thought of Roger as I sat in that chair, wearing 3D glasses, with tears running down my cheeks. I have come so far from being that child craving the escapism a dark theater provided. Sometimes it takes coincidences of cosmic circumstances to recognize how far you’ve come

While I watched the movie, I was once again inspired. I was inspired to write an ode to the magic of film, the creative word, and perseverance through difficulty. An ode that would make Roger proud, were he to read it. With time, the world will see Ebert as what he was, one of the greatest American writers of the last half century. He helped shape the way I view the world and I will greatly miss his contribution to it.

Colin La Vaute: Roger Ebert gave Jurassic Park three stars. It was one I would always disagree with him on.