Two Visions of the Future; an Oily Slope or a Green Tomorrow

We are on the verge of great discoveries or the brink of total disaster. After Hurricane Sandy smacked the East Coast with a wallop that splintered New York City, as well as some innocent by standing satellite communities, the most resounding cry heard was, “now do you believe in climate change?” Except for some minor fringe elements who insisted it was the wrathful manifestation of a higher power, most people agreed; climate change was with us. It wasn’t leaving any time soon. It was best to grit our teeth and bear it.

In a sense, even the proponents of wrathful vengeance warrant some accuracy for the claims. Climate change is a higher power, one the world in general has been cheerfully helping along, and one that could conceivably turn our hitherto commodious home into a very hostile planet. It would seem that this demonstration, committed quite casually by a force that has been using some extreme measures for the past two years, would be enough to make any person who had enough intelligence to understand the three states of water, concede it’s time to clean up our act. After all, we have the technology for developing green energy. We know how to capture wind, produce hydraulic pressure, constructively use methane waste, and harness energy from the sun. Enough of an itinerary to make visionary thinkers rub their hands together and say, “let’s get down to business.”

However, our visionaries that measure a totally different type of green science, one that keeps a balance of weight within the banking institutions, is applauding the ability to scrape more hydrocarbons, using an ingenuous method called fracking, as the next savior of our faltering economy. Although it is widely accepted by all who are not a part of the oil and gas industry, that this particularly dirty method which involves blasting a mixture of sand, water and chemicals into the ground to release the gas or oil inside, is joined at the hip with polluted water, poor air quality and unnatural tremors, we are supposed to take gas fracking development as good news. Never mind that this creates one more dangerous environmental issue.

While hybrids are slowly creeping into the automobile industry, with bashful little faces announcing 45 mph and even more bashful little bodies, Tesla manufacturers have gone bold. They have presented on their showcase a rather sporty all electric car. The Tesla Model S was just named car of the year; the first time an electric car had held the honor. The stylish sedan beat out such serious competition as the BMW3, Lexus GS, Porsche 911 and Porsche Boxster. 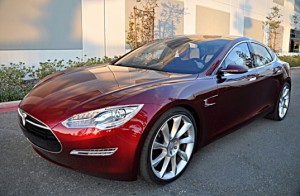 Automobile dealerships have been crying foul play. Apart from the federal funding from the federal funding Tesla receives to develop electric cars; an option open to all automobile manufacturers, the dealerships are criticizing the strategy Tesla uses to sell their cars. They run their own showcase and deliver directly to the buyer. The show cases, Tesla Stores are simply show rooms where no cars are actually sold.

The dealerships, who view this cutting out of the middleman as a dire threat to their own services, began filing legal objections. By October eighth, the states of Illinois, Massachusetts, New York, and Oregon, were filing lawsuits that Tesla was illegally selling cars. Colorado has already prohibited Tesla from selling cars by amending laws that governed dealer operations and their business with auto makers.

The Tesla stores are modeled after Apple’s successful chain of retail stores. Tesla representatives state you can only buy one of their vehicles online and that the stores were purely for educational purposes. Asked for comment on the 2010 Colorado legislation, Tesla spokeswoman Shanna Hendriks answered, “Tesla’s business model was developed in the best interests of consumers and the advancement of electric vehicle technology. In doing so, we have worked closely with regulators to operate within compliance of all current state and municipal laws.”

Despite the discontent of auto dealerships, with the coronation of the Model S, Tesla appears to have one giant foot in the world of the automobile industry. There are drawbacks. The Tesla Model S sells from $49,900 to $97,900 based on battery options and upgrades. Many consumers are hesitant about paying the high price tag and battery range. There is still another matter to clear up. While the electric car is emissions free, and energy efficient, it still needs recharging, and our electricity is still primarily derived from gas and oil.

Our technology depends more and more on electricity. Electric tools line up in garages. Microwave ovens are as common in homes as televisions. We have air conditioning in the summer and fans to circulate the heat from natural gas units in the winter. Computers have extended our need for electricity even further, replacing not only traditional communication devices, but board games, cash registers, security protocol and even the need to go inside and pay a teller for our gasoline. Even our cell phones and lap tops need an electrical base for recharging. Electricity is the life force giving us comfort, warmth, less manual labor and countless conveniences. We can conserve on gas and oil for our vehicles and our homes, but considering how much we’ve invested in electrical technology, it becomes questionable how much we can really reduce our consumption of electricity.

We could switch back to using more manual tools, limiting our computer use, watch less television and DVD movies, or we could begin investing in alternative methods for fueling our electric lives.

Cool Planet Energy Systems believe they’ve found the answer to producing high octane gasoline without government subsidies and without the need for oil extraction. Their process actually removes carbon from the atmosphere during the course of production. The company states they can produce this bio-fuel for as little as $1.50 a gallon.

Testing their gasoline against another vehicle using standard fuel, they passed five smog tests with no significant differences in consumption or emissions from the control vehicle. Their test car met California’s 2020 Low Carbon Fuel Standard eight years ahead of schedule.

Cool Planet’s processing differs significantly from the techniques of other bio-fuels. It does not depend heavily on corn as a fuel source, but instead is able to convert just about any organic plant compost; wood chips, agricultural waste, perennial grasses into useful hydro-carbons. Catalytic conversion is then used to complete its production. According to Cool Planet, the end result is is high-octane gasoline that is fully compatible with today’s standard automobiles and existing conventional fuel distribution systems.

There is another kick-back to the bio-plant’s technology. The by-product of producing their bio-fuel is the activated carbon, or bio-char, which can be used to increase ground fertility while isolating the carbon captured in the atmosphere. The bio-char enhances soil quality through improved water retention, thereby increasing crop production. Isolating and removing atmospheric carbon reverses the effects of fossil fuel consumption, resulting in up to 150% carbon footprint reduction for every gallon used.

Howard Janzen, President and CEO of Cool Planet Energy systems states that each of its micro-refineries “is one hundred times smaller than a typical oil refinery and can produce 10 million gallons of fuel per year; this puts us in the running to compete with oil at $50 a barrel without any government mandates or subsidies.” By mass producing the mobile, pre-fabricated micro-refineries, they can significantly reduce the costs of feedstock transportation, maximizing the overall capital efficiency in investment.

Although Cool Planet is largely concentrating on its usefulness for vehicular fuel and a solution for harmful, fossil fuel based fertilizers, its advantages should be added to the list of low impact energy solutions. In his re-election speech President Obama emphasized, he plans to work with Congress to to free ourselves from foreign oil. However, we have seen in his tenure, a policy of catering to fossil fuels, with expanded plans for off-shore oil development and increased use of gas fracking technology. This defeats the spirit of low impact environmental energy development.

Replacing our fossil fuel infrastructure with green technology will create more jobs for our work force. It will reduce the price of energy, allowing an improved living standard for a society strapped with rising costs and low wages. It will return our soil to healthy, sustainable agriculture. Increasing the use of fossil fuels will only exacerbate the effects of our changing climate. It will dwindle the supply of renewable resources. We will have saved nothing through the accelerated use of domestic fossil fuels if we do not have clean water, thriving marine life and reusable soil. Hurricane Sandy served as a warning that without practical solutions, our electric lives are in jeopardy and our comfortable habitat will be replaced with a hostile planet.

The Frankenstorm that Rose from the Deep