Those Loud-Assed Sirens of L.A. 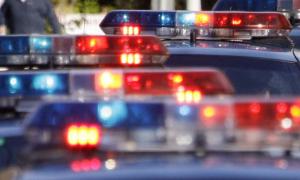 Some of the most ridiculous have revolved around people writing in chalk on the sidewalk.

I don’t believe it was the act, but probably the message that pissed off the cops, back in July of this year:

“Free chalk. Free speech,” said Sonny Estrada, 22, who considered himself part of Occupy L.A.
Other chalk messages were more direct.  They claimed persecution by the LAPD for writing in chalk on the sidewalk.  They were messages sprawled all over the sidewalk, calling the police an assortment of names.

Four officers were hurt and treated for minor injuries in the Thursday night incidents. One officer suffered a minor concussion after being hit in the head by an object thrown by the crowd, police sources said.

The melee appeared to have stemmed from a sidewalk-chalk drawing demonstration, witnesses said.

A woman who identified herself as part of Occupy L.A. said protesters attended the ArtWalk with the intention of showing support for people previously arrested for chalking on the sidewalk. A Facebook event advertised the planned demonstration, apparently named “Chalk Walk.”

We witnessed the riot police line up on 6th and spring.  I’m told there were more on 5th and Spring, a block away.  I know there were helicopters circling overhead, so something was going on.

I rarely attend art walk, because I can see it from my window and it feels like it is a pretentious event planned for 20 something’s who have no interest in art; but more in hanging out in cool places.

What we saw were a few skinny, aging hippies.  They strutted in front of a line of cops on Spring Street.  Aiming their cell phones at the cops and taking photos in an odd effort to show some ridiculous form of bravado.

They looked ridiculous prancing in front of the line of cops as if they felt brave.  Knowing full well (as we did) that they wouldn’t have the balls to do that, if there hadn’t been a crowd watching them for protection.

There is a dive bar on the corner of 5th and Spring called the Down and Out.

The name is fitting.

I’m not sure if the people who frequent that bar realize it’s a dive bar.  Because, the women get all dressed up to go into this place and they appear to come from other areas.

Maybe it’s their youthful vision of what they perceive a ‘beat bar’ used to be.

It is an intersection where a police officer shot and killed a man with a knife.  The man was a local drug dealer and a homeless man.  He tried to sell an undercover officer some drugs and pulled a knife on him, before he was shot

However, there is also a downside of life that hangs out around there.  It’s a horrible area after the shops all close up.

The skid row’s homeless and mentally insane hang out among the local drug dealers.

People who sell heroin, speed, meth and pot to both groups of folks, rich and poor, alike.

But the Down and Out looks like any other downtown dive bar, once you enter.  At this bar there are:

Once muscular and now overweight bouncers

Geeky homeless guys who think they are cool

As I said, it’s a dive!  It has all of the obligatory fixings.

And you can hear these folks whooping and hollering at just about two a.m., each night when they make their way to their cars to drive home drunk.

So, it’s amazing we don’t see more arrests.  Most of what we see is drunk arrests.

The other arrests seem to revolve around profiling.

We are familiar with this. We believe that my fiancée was errantly profiled as the type who would buy a hooker, by the LAPD.  It went like this:

He told me one day that he was stopped by, “a fat and nasty woman who was propositioning him for sex.
He thought she was a police officer, posing as a homeless hooker.  He said there was something about her that made him wonder why she approached him, as he was simply walking home.

She told him he could have sex with her for nothing.  We both thought this was odd.  Later that day, we read that there had been a sting in the area he had been approached.  We knew that he had been profiled as a target.

Los Angeles has been blessed with our own serial killer, too.

He was apprehended, but before that happened, we were graced with photos of a man they suspected had been responsible for at least ten murders.

His name is Lonnie David Franklin Jr.  He’s a 57 year old man who was named the Grim Sleeper, because he stopped murdering victims from 1988 to 2002.

On July 7, 2010, the Los Angeles Times reported that an arrest had been made. District Attorney Steve Cooley identified the suspect as 57-year-old Lonnie David Franklin Jr., a mechanic who worked between 1981 and 1989 for the City of Los Angeles in the sanitation department and briefly for the police department.  The arrest of Franklin reportedly was due, at least in part, to the use of familial

Police eventually located similar DNA belonging to Franklin’s son, Christopher, who had been convicted of a felony weapons charge. According to Los Angeles District Attorney Steve Cooley, detectives then used a piece of discarded pizza with Franklin’s DNA to make the link. One Los Angeles undercover police officer pretended to be a waiter at a restaurant where the suspect ate. He collected dishes, silverware, glasses, and pizza crusts to obtain DNA.  The identification was used to arrest Franklin after his DNA was obtained and deemed a match.  Saliva found on victims’ breasts was used to obtain a DNA match thus linking Franklin to the murders.

On December 16, 2010, the Los Angeles Police Department released 180 photos of women found in Franklin’s home. The images show mainly African American women of a wide age range, from teenagers to middle-aged and older, often nude. Police believe Franklin took many of the pictures, which show both conscious and unconscious individuals, and date back up to 30 years. (Source: http://en.wikipedia.org/wiki/Grim_Sleeper)

Crime on the Downswing

Violent crime has fallen in Los Angeles, a fact that Mayor Antonio Villaraigosa is proud of.

There are many reports of vehicular homicides committed by drunken drivers.  Los Angeles hasn’t curbed its citizen’s need to get sloshed.

I wonder if all of those murdering creeps are getting drunk and climbing behind a wheel, these days, instead of shooting people?

And we still have the missing persons reports.  People are disappearing all of the time, in L.A.

The family of Guadalupe Lopez and the Los Angeles Police Department are asking for the public’s help to locate her.  On November 20, 2012, around 4:30 p.m., Lopez was last seen walking in the area of Eastlake and Broadway, headed home to 3200 block Griffin Avenue. Lopez told her 18-year-old friend that she was going to “hang out” at the house of one of her male friends and wanted to go alone.   Lopez, however, did not return home.

The family of Sarah Stavenow requests the public’s assistance in locating her.  Stavenow is described as a 26-year-old White female with blond hair, blue eyes. She stands at 5 feet 5 inches tall and weighs around 165 pounds. Stavenow has multiple tattoos on her left arm. Stavenow, was last seen by her family on November 16th, 2012, in the city of Ottawa, Canada. She arrived at LAX Airport on November 16th and has not contacted her family. (Source:http://www.lapdblog.org/)

However, Los Angeles is falling away from violent crime.

The sirens of the squad cars may have something to do with the reduction in crime.  They are the noisiest sirens you’ll ever hear!
When you hear them nearing, you immediately have a desire to go out and bitch slap the son-of-a-bitch that brought them shrieking down the street.  Do you suppose this is by design?

You can read more from Jennifer Lawson-Zepeda at her blog @ http://lawsonzepeda.blogspot.com/

Jennifer Lawson-Zepeda-Living downtown, we have the opportunity to see many arrests. Some of them we applaud. Others seem odd to us. And some seem like they use WAY too much manpower for the arrest.