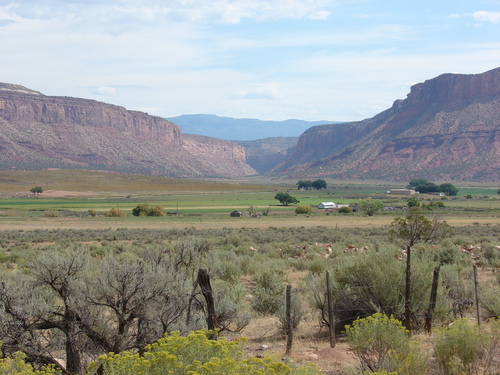 Tucked in a corner of the extreme western edge of Colorado, is a nearly deserted area called Paradox Valley. Perhaps one paradox about the region is that although it’s close to Moab and the Internationally famous Arches National Park, which contain the world’s largest and most amazing sandstone arches, the area is barely noticed. It has the same ethereal beauty, the same geological formation of deep red sandstone, gypsum, shale and limestone, the same rich history, yet Paradox Valley remains the shy little sister in the background, while the Utah wonders are the stars of the stage.

Its unfortunate anonymity, however, is not how Paradox Valley got its name. A curious phenomena is ascribed to it. The Dolores River runs through it; but instead of traveling from end to end of the 25 mile long valley, it cuts a path across the middle. It was named in 1875 by geologist and surveyor, Albert Charles Peale, who noted that the river did “strange and unexpected things”. It emerges from a narrow gap in one wall, cuts perpendicularly across the valley and exits through another gap. Because of its unusual geography, the river cannot be easily irrigated, but springs and streams fed by snow melt support farming in the northwestern end.

This unusual geographic occurrence can be explained by salt tectonics. Three hundred million years ago, salt deposits began flowing from the turbulent northeast to where the valley is today. Encountering a geologic fold in the rock formation, the salt began pushing upward, forming a dome. Groundwater entering the dome, dissolved the salt, causing it to collapse, creating the valley. It took over a hundred million years for this process to occur, long enough for the Dolores River to have already charted its course. This crossed river course can also be found in Moab, where the Colorado River also cuts crosswise through the Moab Valley. The geological twin to Moab appears on the verge of suffering the same fate. Just as Moab became a bustling industrial town during the 1950’s due to uranium mining, the Canadian company, Energy Fuels, now wants to mill uranium in Paradox Valley.

When History is a Paradox

Paradox has a history of countless struggles, all ending in failures to make dreams come true. It was targeted during the Cattle Wars of the late 1800’s by ranchers battling it out for rangeland and water. With as many fugitive outlaws occupying the wilderness outpost as there were peaceful citizens, the area soon became known as “the slaughterhouse of the west.” Because of its topography, surrounded by soaring sandstone cliffs, and punctuated by the edge of the rugged San Juan mountains, early access to the region was difficult, making it a place largely ignored by law, but not by outlaws. Murder was common, tempers boiled over. Death by violent means so frequent that one author titled his wild west book, “The Hell that was Paradox”.

While cattle ranching was the first attempt to conquer and settle the beautiful but harsh valley, other attempts to cause it to flourish have also ended with prosperity for a few entrepreneurs, but general poverty for the residents. The discovery of copper in the 1890’s brought in an influx of settlers to the valley town of Bedrock. A short time later, uranium was also discovered, and the area was thought to have one of the largest radium ore deposits in the world, until richer deposits were discovered in Belgian Congo. As a uranium source, Paradox was placed on a back burner, although some mining was executed throughout most of the twentieth century.

The Paradox of Economy

Currently, the greatest source of revenue for the valley is salt. The US Bureau of Reclamation began construction on a salt pumping unit in the 1980’s, collecting the saline groundwater from twelve shallow wells along the Dolores River. The system dilutes the brine with water and a corrosion inhibitor, then transports it to a high pressure injection system where it is deposited fourteen thousand feet deep into the existing Precambrian and Paleozoic rocks. To date, this process removes 113,000 tons of salt annually. It has also caused thousands of small earthquakes to resonate through the surrounding area, yet it has not caused the approximately three thousand residents of the valley to thrive.

Despite a history of failure to bring prosperity to the valley through its natural resources, many of the residents are pinning their hopes on the proposed uranium mill, which, if approved, will be the first one developed in the United States in twenty-five years. The Atlas Mining operation in the Moab Valley first opened in 1961 with 300 mines. By 1984, when the uranium mill was put on standby, the mining wastes, laced with radium, uranium, thorium, polonium, ammonia, molybdenum, selenium and nitrates, had grown to 16 million tons and covering 130 acres to a depth of 110 feet. During wet years, when the Colorado River flooded, the mine tailings were not only leaking into, but standing in the drinking water for 25 million users in the states of Nevada, Arizona, California and in Mexico. Reclamation efforts for clean up of the site are estimated at over one billion dollars.

While the demand for uranium reactors has decreased within the Western world since the melt-down of the nuclear power plants in Japan, demands for the uranium have increased in China and India. Uranium value is currently targeted at $59 a pound, giving projected revenues from the milled uranium at over 330 million dollars a year. Even though the promised jobs to the local residents are, at best, dubious, that’s a lot of potential tax revenue coming from Paradox Valley.

Recent settlers to the area have taken a fresh look at the valley’s potential. Organic farms have sprung up on the valley floor, and plans have been discussed for windmills and solar energy. A weakened US economy has quit saving for that expensive vacation at an International resort, and have begun looking at the options close to home. A trend toward back-to-nature camping trips have seized public imagination in recent years, with much of the attention shifting toward small, barely noticed, yet highly scenic areas like Paradox Valley. To make the area even more interesting, the valley contains an astounding number of unmapped petroglyphs, which could also drive tourism into the barely settled region.

Paradox wouldn’t really have a lot to gain by allowing a uranium mill to be developed in its district. The number of jobs it would create are limited, and the potential health hazards are great. It would diminish the value of real estate and its desirability for tourism. There is another crucial factor to consider. The mill would need to use 144 gallons of water a minute, 25 hours a day for the next forty years, to stay in operation. Colorado is already experiencing a water shortage and the wars for water rights have already begun. With climate change, the Ogalla aquifer is expected to lose twenty percent of its water.

In hearings held November 15, the Canadian agency stated “it would be beneficial to the public health and citizen interest” to allow the site to accept radioactive waste and other dangerous materials from all over the country.

Energy Fuels has asked biologists who cited endangerment to the wildlife, the air and water, to reconsider their findings, even though the mill could impact endangered species.

The impact report determined that 99% of the radioactive ore produced at the mill would end up as radioactive waste.  The report also stated that there was only enough water to operate the mill  for five years of its proposed forty year lifespan, and keep the tailings saturated as required.

After so many failures in the past to become a thriving community, it’s understandable that Paradox would like to finally be in the winning circle. It’s understandable that the residents look for and hope for a new source of revenue, but their dreams will not be fulfilled with uranium milling. Their beautiful hide-away from commercial enterprise will only be disrupted and polluted. In forty years, the uranium will be extracted, the land returned to arid desert, the few residents left will recount the stories of the hopeful boom and bust that time after time has characteristically turned Paradox into a ghost town.

Karla Fetrow- Shoving the lessons of history aside, Paradox Valley embraces the hope that uranium milling will finally give the desert valley much needed prosperity.