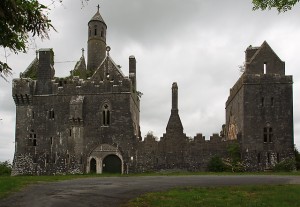 It was the summer of 1972 and I was enjoying one of the most beautiful July days I have ever known in Kerry, on the south west coast of Ireland. There was not a cloud in the sky and the temperature was well into the 80’s. It was about 3pm and I was making my way by car back to my holiday lodgings in Waterville and had just passed through the beautiful town of Kenmare.

Whilst driving along the main road I came across a tourist sign directing to Dromore Castle along the Sneem road. I was familiar with the old Irish song and as I had plenty of time I made my way to the splendid large castle-type entrance. A tourist sign indicated that a route called The Kerry Way ran through the Irish Forestry owned estate.

It was weird but as soon as I passed through the entrance I had the feeling that I was alone and that the heat of the day did not appear to enter the tree lined road ahead. It was decidedly cold and there was not a sound – no birdsong, no humans and no traffic to be heard or seen. The feeling sent a cold shiver down my spine…

I parked the car and as I strolled alone one of the many pathways that ran through the fields and woods I suddenly became aware of a drone in the distance. As I came closer I thought that I could hear the sound of voices singing. I was unsure but out of curiosity and the fact that I love listening to, or in fact taking part in a good singsong, I changed direction and made my way towards the sound.

It was in fact singing and it was coming from a group of about twenty schoolchildren who seemed to be on a day’s outing. I sat in a grassy clearing some distance away and listened to some of the songs that I recognised from my schooldays. Some were in Gaelic and as the beautiful sounds reached me I felt strangely at peace with the world.

I can say with all honesty that I do not know from where the strangely dressed old man wearing old but clean clothing came. However, he silently came up to me and with his pipe in his mouth sat down about six feet away from me. He wore an almost threadbare soft cap and around his throat he wore an almost white scarf. He nodded to me and spoke in Gaelic in a soft poetic voice and accent. I recognised the greeting and did my best to remember the correct reply to his wish of good health. He then changed to broken English and I thanked him for doing so.

I introduced myself and told him that I was on holiday from London. He replied “Well now Michaeleen me boy, and isn’t it a fine day you brought with you all the way from London?” “It is indeed Padraig” I replied “and may we have many of them”. “Sure now, isn’t it truly a great difference from the times that come to mind whenever I visit the old grounds. Arrah, memories indeed…” he sighed as his sentence trailed off…

“How often do you visit the place Padraig?” I asked. “For more years than I care to remember…” he again sighed. “Sure now, wasn’t my very own grandmother born in the very grounds here, not very far in fact from where you are now sitting” he added in his soft sweet voice.

“Do you mean in the Castle?” I asked puzzled. “Not at all” he raised his voice a little “no such luck. She was born in the open with no-one at all to help her and sure now didn’t her mother – my grandmother – not have a scrap to eat”. “I’m sorry to hear that” I added in an apologetic tone. “’Twas them blackguards the Mahony’s that I’m annoyed at. Sure now, didn’t they try to bring us all to our knees”. Padraig seemed to be getting angrier…

“And who were the Mahony’s?” I asked. “Sure now Michael, didn’t I forget” Padraig quietened down considerably, “that you are a stranger to these parts. I’ll tell you what I can remember from what I was told as I grew up”.

So this is Padraig’s story translated into plain English together with other information I have since learned:

Work began on the Castle in 1831 by a wealthy family, the Mahony’s, and was completed in 1839. Times were good then. The actual walls had been completed earlier in the 1800’s but when the ship carrying a cargo of lead from London for the roof and a large quantity of wine for the cellar, sank in the Kenmare River opposite the castle, work stopped and did not continue until the 1830’s. Dennis Mahony was a minister of the Church of Ireland and a totally committed Protestant whilst the vast majority of the population of nearby towns and villages were Catholic and poor.

Many of the locals were employed in the building of the castle and they were paid a fair day’s money for a fair day’s work. Everything was going along nicely for about six years until the Blight came to the area. Year after year the potatoes rotted in the ground causing the Great Famine which swept through all of Ireland but in particular the Kerry area. Dennis Mahony opened his Protestant chapel to the locals and provided they sat in church and listened to his sermons, they were fed from his soup kitchen. This was known as ‘proselytising’ and to this day, the system of food for religious beliefs is still spoken of with hatred in country areas of Ireland.

Dennis was to pay his dues later for his actions, for in 1850, when the Famine had at last past, he was attacked in his church in Templenoe. When he returned to the castle, he found that it was being attacked by an angry mob who were damaging the gardens, felling trees and about to set fire to the castle. They were only stopped from doing so by the actions of the local Catholic priest who intervened.

While Padraig was telling the story of the castle, I heard the group of children break out into the song ‘The Castle of Dromore’ and together with me, Padraig stopped and we listened intently to the words. That beautiful singing of that most beautiful and haunting song not only lingered on the air long after they had finished, but is something I shall forever remember.

As all became quiet again and the children began to move away from the clearing, Padraig again spoke. “So you see Michaeleen” he had a tremor in his voice. “The woman in the song was my great grandmother and she died not long after my grandmother was in fact born”. He paused for a long while and I said nothing. He then continued “That is why” he said with some venom in his voice “Yes, that is exactly why I return to this place as often as I can. I come here to renew our family curse on the Mahony family”.

With that, he stood up and quietly walked away without uttering another word. I merely sat in stunned silence.
—————-

There are a couple of other facts I later discovered about the Castle. In the 1890’s it was owned by Harold Mahony who was an excellent tennis player. In fact he was the last Irishman to win at Wimbledon which he did in 1896. One of his guests, Harold Boulton was a writer and is famed for writing the lyrics of the Skye Boat Song which relates to the escape from Scotland of Charles Second. One of the other songs he wrote is indeed “The Castle of Dromore’ which was published in 1892 and later translated into Gaelic…

The Castle of Dromore….
Harold Boulton.

October winds lament around the castle of Dromore
Yet peace is in her lofty halls, my loving treasure store
Though autumn leaves may droop and die, a bud of spring are you

Mike-A story told of the Curse of the Mahony family