While Netanyahu Draws a Red Line 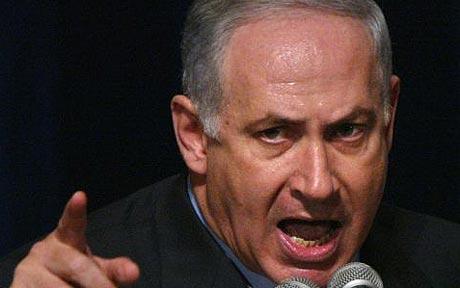 Israel Prime Minister, Bibi Netanyahu., has drawn the red line, stating that those who refused to stand by it have no moral right to give Israel a “red light”.  By this, he inferred that a war against Iran would be moral,  and somehow, legal.  An inference to an aggressive action against a country that has to date, demonstrated no inclination for this desired war, is puzzling at best.  According to MJ Rosenberg of Huff Post, the Israeli citizens are also disinterested in going to war with Iran, even though Natanyahu assures them that only five hundred Israeli citizens would be killed in an Iran missile strike retaliation.  Not only that, but only three percent of American Jews think war with Iran is a good idea.

Republican Presidential candidate, Mitt Romney seems to feel America has abandoned Israel by not being more enthusiastic in  supporting Netanyahu’s desires to send Iran into the stone age.  In a war-like atmosphere, it’s only natural that nuclear capacity is a prologue to nuclear weapons.  In the meantime, the ground gets shakier, and war or no war, countries are choosing up sides.

What exactly is fanning the flames behind Netanyhu’s obsession with bombing Iran?  On the surface, the evidence seems to point to a religious war.  The recent attack on the American consulate in Benghazi, Libya that killed U.S. ambassador to Libya Christopher Stevens and three other Americans was said to be provoked by a group that felt a U.S. produced film insulted the Prophet Mohammad.  The origins of the film is rather murky.  The cast that starred in it assumed they were making an action flick, called “desert Warriors”, set two thousand years in the past.  The producer, who claims his name is Sam Bassiel, is not listed with the directors’ and writers’ guild.  Nobody apparently knows who financed the film, which became an American flop in the box office.

The film, with a title recently changed to “Innocense of Muslims” is purported to have been backed by a few extremist anti-Islam groups. It was declared by the mysterious Bassiel, who uses several aliases and claims an Israeli/ American background although Israel has no record of him, that the film is “a political effort to call attention to the hypocrisies of Islam.”  Stated Bassiel, “Islam is a cancer.  The movie is a political movie. It’s not a religious movie.”

The political repercussions of the film have been enormous.  Apart from the fatal protests in Benghazi, the film sparked anti-American demonstrations in Cairo, Egypt, where over 2,000 protestors stormed the US Embassy and  removed the American flag, attempting to replace it with a black flag that stated, “There is no God but Allah”.

There is, however, a piece to the puzzle that just won’t fit into the religious scenario.  Iran supports the current government of Syria, which has been sharply criticized by Al Qaeda for failing to pursue the cause of Islamist Muslim.  Al Qaeda leader,  Ayman al-Zawahri stated all Muslims should back the rebels seeking to over-throw President Bashar al-Assad as it would bring them one step closer to the goal of defeating Israel.

To add to the confusion, the US sends support to the rebel troops intent on over-throwing Assad, which in turn gives this monetary support to Al-Queda.  According to John Glaser of Anti-War, the greater the greater the Al Qaeda profile, the more money is flown in to support the endlessly growing confusion of who is fighting against who and for what reason.  States Glaser, “All of this collusion is done in order to siphon off more taxpayer dollars, military training from Washington, and major weapons systems from America’s defense corporations.”

The memorial for the 9/11 attacks have been declared Patriot’s Day.  More accurately, it should be called, “Homeland Security Day”.  After eleven years of constant conflict and witch hunts for terrorists abroad and at home, Americans have grown weary of policies that have affected their freedom of assembly, freedom of peaceful protest and stripped their privacy.  Yet they are being prepped and cultivated for a war that could have world-wide consequences.

President Vladimir Putin of Russia is nervous about a US led NATO plan to place land- and sea-based radars and interceptors in several European locations. Washington says the shield is intended against a possible missile attack from Iran, but Moscow sees it as a threat to its security, saying it may eventually grow powerful enough to undermine Russia’s nuclear deterrent.

Putin stated that a remark made by US Presidential candidate, Mitt Romney, has justified Russia’s opposition to defense plans in Europe, after the Romney declared Russia as the number one geo-political foe of the United States.

“I’m grateful to him for formulating his stance so clearly, because he has once again proven the correctness of our approach to missile defense problems,” Putin said of Romney. “The most important thing for us is that even if he doesn’t win now, he or a person with similar views may come to power in four years. We must take that into consideration while dealing with security issues for a long perspective.”

While China opposes the development of a nuclear arsenal in Iran, it harshly criticizes the NATO sanctions against the country and states that Iran has the right to develop nuclear capacity for energy purposes and urges that the conflict with Iran be settled peacefully.

As the estimates on the possibility of war with Iran edges up to forty percent, peaceful resolution isn’t looking too good.  The moral red line that Netanyhu has drawn is clearly immoral.  He has advocated hostilities against a country based on the rumors of nuclear arm capacity without evidence that Iran has any intention of developing nuclear arms.  His paranoia has harmed a developed country that had been economically stable, with a large middle class , through the sanctions imposed by NATO.  He has pitted not only the citizens of his own country into unwillingly contemplating war, but the citizens of the United States.

War against Iran isn’t necessary from a religious view, yet because of a film that wasn’t even heard of in the US, the flames of religious indignation have been ignited.  War isn’t necessary from a political view.  Iran’s support of Syria has actually stabilized any threats from Muslim countries to march against Israel.  War with Iran however, is a cash cow for financial investors.  While we are at war, we cannot concentrate on our own problems involving adequate housing, inflationary costs and unemployment.  Thousands of young people struggling for economic stability will be advised to simply join the military.

While we are at war, the hitherto neutral countries will be watching.  They will weigh the justifications for bombing Iran and speculate on how these aggressive policies will affect their own governments.  Many of these countries might not remain neutral.  They may decide an economic war is not palatable and side with Iran for ideological reasons or to protect their own systems of government.

An entire generation of people do not remember the hardships, the distrust, the fear and oppression of the Cold War.  They do not know what it’s like to be given instructions for bomb shelters and preparations for what to do if they are in a classroom or office just prior to an attack.  We’ve torn down the Iron Curtain that suppressed our knowledge and interactions with citizens in half the world, yet down a thicker, heavier curtain is being raised.  It is a curtain made of drones, air strikes and intense security measures.  It is a curtain that draws across our very windows, lending suspicion and biases against our neighbors.  We are being drawn into a war that is meaningless to all except the perpetrators of prejudice and hate, and the people who finance them.  The red line has been drawn and the only question that remains is what side of it will we, individually, and as a people of the American Republic, stand.

Karla Fetrow: We are being urged into a war that is neither moral, religious nor political, but purely economical.

In Defense of Religion: Bigots, Radicals and Blasphemers—Lend Us Your Ear