Getting High in the Egyptian Pyramids 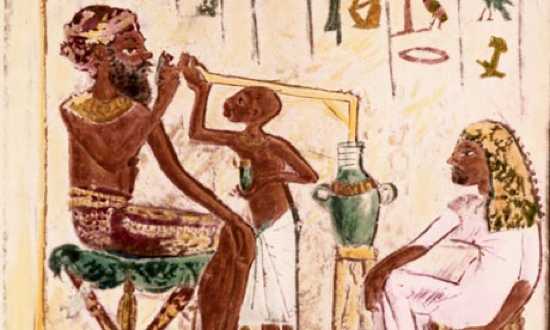 By: Mike
When first I heard the tale of the subject of this story not many years ago, I was amazed and delighted. You see, whenever the ‘experts’ are confounded and proven wrong, I always give three cheers and all credit to the person who caused the confusion. One of the best examples is the Coelacanth. All the experts stated that it was as extinct as prehistoric animals. The only problem was that nobody told the fish as it was found happily swimming about in South African waters in 1938. It is now comparatively common but conveniently known by the ‘experts’ as a ‘living fossil’.

However, as the heading of this little story suggests, it has nothing whatsoever to do with fish. Some excellent scientific work which will be explained later, poses some very important questions.

Such as:
Did the ancient Pharaohs of Egypt use such drugs as cocaine, cannabis and tobacco or were they merely used in preparing bodies for mummification? Evidence discovered around 1992 and published by the German Scientist, Svetla Balabanova would strongly suggest that they did in fact do one, the other or even both…

Not very interesting? On the contrary, for if they did it throws some very large spanners into the works and suggests that history will once again have to be rewritten. You see, the coca plant from which cocaine is produced, the cannabis and tobacco plant were not natural to the Eastern side of the Atlantic – they were from the Americas, in particular Colombia, Peru and Bolivia.

As I said, it prompts the questions – how did such drugs get to Egypt? Did the Egyptians have trade with the South Americans? Were the Americas discovered thousands of years before Columbus, the Vikings or even by my pet favourite, Ireland’s Saint Brendan.

The reason I really like this story is the fact that when Balabanova published her findings, world-renowned Egyptologists poo-pooed her theory and in fact refused to even discuss or debate her findings. Claims were made that earlier examiners had contaminated the mummies; that any suggestion that the Egyptians had any contact with America was preposterous and that Balabanova’s tests were flawed.

However, the good lady did not panic. She merely quietly went about proving her findings by examining mummies from near and far museums. She used several different methods of testing and indeed, the vast majority proved positive. Nine mummies were evaluated and all showed signs of cocaine and cannabis and eight showed signs of nicotine. The concentrations were not as high as modern day users.

It was then argued by the ‘experts’ that the mummies may not have been ancient but may have been ‘faked’ mummies. This was not uncommon in early Victorian times when many European museums were searching for specimens. It was also thought by the same Victorians that ‘ground up tissue from mummies’ was a curative potion for certain ailments as the dark powder resulting was thought to have contained ‘bitumen’.

In order to fulfill the demand, Egyptians made up the orders by making modern mummies. It was a fairly simple process. Bodies would be buried in sand and treated similar to that which the ancient ones had been treated. The museums did not in certain cases take much care in checking the provenance. Neither did those producing the ‘miracle cure’.

Once again Balabanova quietly got on with her research and began checking records for the mummies she had examined. In all cases they proved to be authentic. She made several different forms of testing to prove her argument. These included tests which are fully accepted in present day Courts of Law. Companies who have ‘No drug’ policies for their employees also use the same standard. Once again Balabanova was proven correct…

For all intents and purposes, it would appear that Balabanova’s and subsequent further testing by others give at least a 75% chance that her theory is correct and that the drugs mentioned are present in the mummies.

If this theory is fully accepted, a can of worms is dramatically opened. How did those drugs get to the Egyptians?

It is arguable that they did not come via the Atlantic, as evidence of silk has been found in ancient times. In that case, the experts are willing to accept that the silk may have come overland from China and traded with the Egyptians. This would require the drugs to have crossed the Pacific. There is an accepted theory that this had been done in ancient times and that a form of trade had existed in that sphere.

However, the ‘experts’ in Egyptology still hold their stance and continue to not even debate whether or not there was pre-Columbian contact between the New and the Old Worlds. It would appear to be naive to assume that only modern man is capable of certain feats and that ancient man was not. There are numerous examples which show that what ancients did is highly comparable with modern times.

The debate is still open on whether or not there was pre-Columbian contact with the Americas but I for one accept it as true. With modern methods I believe that sufficient evidence will eventually come to light proving it as fact.

Meanwhile, Balabanova quietly gets on with her investigations and continues to prove her theory. At the same time, the ‘experts’ refuse to accept that they could be wrong for if they were to do so now, it would show that they had closed minds and were not open to more advanced thinking.

The quest for discovery, to find new worlds, to go where no man has even been before is not a modern experience. The peoples of the past were not mere cave dwellers who were afraid to experiment and travel to new places. I have no doubt whatsoever that they were even more daring than those mountain men of the old West who continued to travel to where no man had ever set foot before.

Long may such adventures and discoveries continue…

Mike-Whenever the ‘experts’ are confounded and proven wrong, I always give three cheers and all credit to the person who caused the confusion.

The Tinkerman’s Daughter-Maddy Prior and Nick Hennessey