Blowback is a Bitch 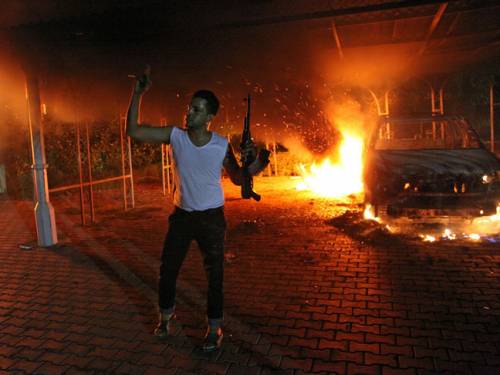 A year ago, someone I call Killary Klingon giggled happily at the news that Moammar Gaddafi had been murdered. “We came, we saw, he died,” she crowed.

Today, the chickens have come home to roost.

Let me say something before I go any further: I told you so.

Back in the summer of 2011, when NATO bombs began falling on Libya, I had predicted that things would spiral out of control until a military occupation on the ground would have to be instituted. And only two days ago, I said, in my annual anti-American freedom-hating rant,

“Again and again, in Africa and West Asia, we have seen a pattern: a strategically located nation with a client regime threatens to slip out of the Empire’s grasp. In response, Al Qaeda or Al Qaeda-affiliated units spring up like mushrooms after the rain, virtually “forcing” the Empire to intervene militarily, whether directly or via proxies like Ethiopia. Result: the strategically important nation remains firmly in the Empire’s grasp.”

And now the Nobel Peace Prizident is about to send Marines and drones into Libya, effectively starting a military occupation of what remains of that country, the day after the US consulate in Benghazi was attacked and burned down, and the American Ambassador and three other diplomats killed.

Now, note that this attack took place in Benghazi. This is extremely important because the whole premise on which Libya was bombed and destroyed, its leader murdered, and its people handed over to the tender mercies of racist Al Qaeda-affiliated terrorist gangs was that an immediate intervention was necessary “in order to prevent a massacre in Benghazi.” It’s this same Benghazi which has just shown its gratitude to the liberators by burning down their consulate and murdering their diplomats.

Do you miss Gaddafi yet?

Now, of course, this isn’t exactly something one couldn’t predict. As even I, a blogger with no greater armamentarium than a laptop and a modem, could do the research to be able to say,

“Does anyone really believe that he (Islamic terrorist Abdelhakim Belhadj, who is now organising anti-Syrian Al Qaeda militias in Turkey), and the other jihadists who spent the last years fighting the Empire in Iraq and Afghanistan before turning their guns on that secular despot Gaddafi, will suddenly let go of their radical ideology and their anti-Western attitudes and turn into model democrats?… I suspect very strongly that when the civil war between the “freedom-lovers” starts in earnest (not very long now, but the initial shots will be blamed on Gaddafi loyalists until it can no longer be hidden – remember the “Saddam dead-enders” in Iraq?) Belhadj will once again morph into an Evil Enemy.”

Obviously, that moment is – if not already upon us – close at hand.

I’ll note in passing that the attack on the consulate seems to have upset a rather important propaganda applecart, which claimed – in the words of Zionist “peace activist” Uri Avnery, who cheered the bombing of Libya and has been for some time screeching for an invasion of Syria – that Libya was showing “growing signs of stability”. In fact, the entire fictional “democracy exercise” in Libya stands exposed.

Not that it really matters, because niceties like democracy were never part of the plans for Libya anyway, any more than they are for Syria, Afghanistan, or Bahrain for that matter.

The whole episode of the attack on the consulate is extremely murky and wrapped up in disinformation, so much so that nothing is clear at the time of writing – was it attacked by a “mob”, or an armed group using the mob as cover? Do mobs in Libya carry rocket launchers? If so, just what kind of “liberation” is this?

And just who were these attackers? The Empire says now that they were Al Qaeda – just what was needed for forces to be sent in, as I’d said earlier. Also, did the Libyan guards of the embassy give away the diplomats’ hiding place to their attackers? If that is so, just how deep is the anti-American sentiment in Libya?

Pretty deep, if one goes by the fact that the same kind of “mob” put up Al Qaeda flags above the Benghazi courthouse, among other places. 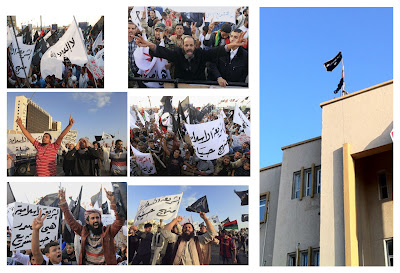 The provocation for the “mob” protest, as it seems, was a rather ludicrous film mocking the Prophet Muhammad. This film’s trailer, which is likely to be pulled off You Tube soon, is almost incredibly bad. I’ve seen better production from a school play, and I’mnot exaggerating. The movie’s also evidently been played with; for example, at one point, an actor says “man plus x equals Islamic terrorism” while writing on a blackboard, “Man + X = BT”. Last I checked, “Islamic” wasn’t spelt with “B”.

The actors claim, too, that the lines they spoke were changed afterwards, and that they weren’t aware that it was an anti-Islamic film. Personally, I’m not too sure about that, because I can’t see how a scene showing a bearded Muslim gang striking down a woman wearing a prominent crucifix can be taken to be anything but anti-Islamic, even to the actors taking part in it. But then whether it was partly or wholly “sexed-up” post-production makes no difference to the film itself.

Even murkier than the film’s production are its makers. Initially, it was supposed to be someone called “Sam Bacile”, a Zionist-American, who was responsible, and he claimed to have made it on $5million donated by a hundred Jewish donors. That seemed to be a story rather designed to fit a narrative, and it isn’t too surprising that no person called “Sam Bacile” seems to actually exist. The current thinking, which may change by the time this article is read, is that the film is the work of a fanatically anti-Muslim group of Egyptian Christians based in the US.

The strangest thing about the film, actually, is that it isn’t new. It apparently premiered this summer to an audience of fewer than ten people, and would have sunk without a trace but for the posting of the trailer online. Obviously, again, something posted online doesn’t necessarily go viral – not without a great deal of orchestrated publicity.

Let me repeat something I’ve said over and over in the past: to Muslims, abusing Muhammad is the ultimate insult. You can abuse Allah all you want – and Muslim poets and writers have done it, over and over – but Muhammad is sacrosanct. This is precisely why the Danish cartoonists targeted Muhammad in their anti-Muslim hate crusade back in 2005, and why the cartoons provoked the reaction they did. Whether you think this is a sign of immaturity or reverence or whatever doesn’t matter; what matters is that by attacking Muhammad, you are guaranteeing Muslim outrage.

If, knowing this basic fact, someone goes out of their way to insult Muhammad, it can be with only one aim – to rouse a Muslim reaction.

So, this film, which failed to even draw an audience, would have vanished but for the trailer being posted – and publicised – online, right in time for an aggressive Muslim reaction, which began in Libya and Egypt and is only now slowly rippling across theMuslim world. I still haven’t seen or heard of any protests by Muslims in Pakistan, India or Bangladesh, but leave it to mullahs looking for an opportunity to stir up fires, and said reaction will inevitably come.

And who benefits from an aggressive Muslim reaction?

Well, for one thing, Al Qaeda does, because radicalisation of Muslims and anti-Western sentiment brings recruits to the cause, just as drone-bombing weddings and funerals does. And once there’s a Western occupation of Libya, the Al Qaeda gangs there can pose as national resistance heroes, and directly increase and reinforce their own influence.

For another, the Empire benefits. At a time when Islamophobia and fear-mongering had reached the point of diminishing returns, and people had begun asking the rationale for perpetual war, scenes of burning buildings and fanatical bearded men screaming slogans make for great TV propaganda. Clean-cut “Western democratic values” against Islamic obscurantism and savagery; given such a choice, which voter would choose the latter?

The Zionazi pseudostate does, because anti-Islamic sentiment can so easily be warped to anti-Iranian sentiment and cheerleading for the apartheidist occupation of Palestine.Especially at a time when the Iran war plans seem to be coming unstuck, this would be a YHWH-send. Personally, though, I don’t believe the Zionazi pseudostate had anything to do with this particular flick. The pseudostate is evil in ways hardly believable, but where its propaganda is concerned, it’s far too sophisticated for a crude effort like this. Even the most amateurish Hasbara propagandists could do better. But it’s undeniable that Islamophobia translates into pro-Zionism, and Binyamin Netanyahu must be a happy man tonight.

Now, let’s be clear: I’m not saying, or even implying, that the Empire orchestrated the events that have just taken place; but they did play into the hands of those who benefit, on either side, from an occupation.

I need hardly mention the racism that is implicit in condemning the attack on the consulate while ignoring the devastation the Empire and its NATO vassals inflicted on Libyans in the past year. Believe it or not, if you bomb a nation, murder its leader, forcibly privatise its economy, and hand it over to terrorist gangs, people are apt to be resentful. It may be difficult to believe, but it’s so.

So, this ought to be a wake-up call for those people who continue to meddle in the affairs of other countries without knowing or caring about the long-term side-effects. In Syria, they are arming, training, and financing Al Qaeda, in the full knowledge that this is what they are doing. But they will not rethink on that, and sooner rather than later the chickens will come home to roost…again.

Blowback is a bitch.

For more from Bill The Butcher visit his blog @ http://bill-purkayastha.blogspot.com

Bill The Butcher-Let me say something before I go any further: I told you so.

Mia Love — A story of Rhetoric and Pig Meat