The Parable of the Bear and Shepherd Lions 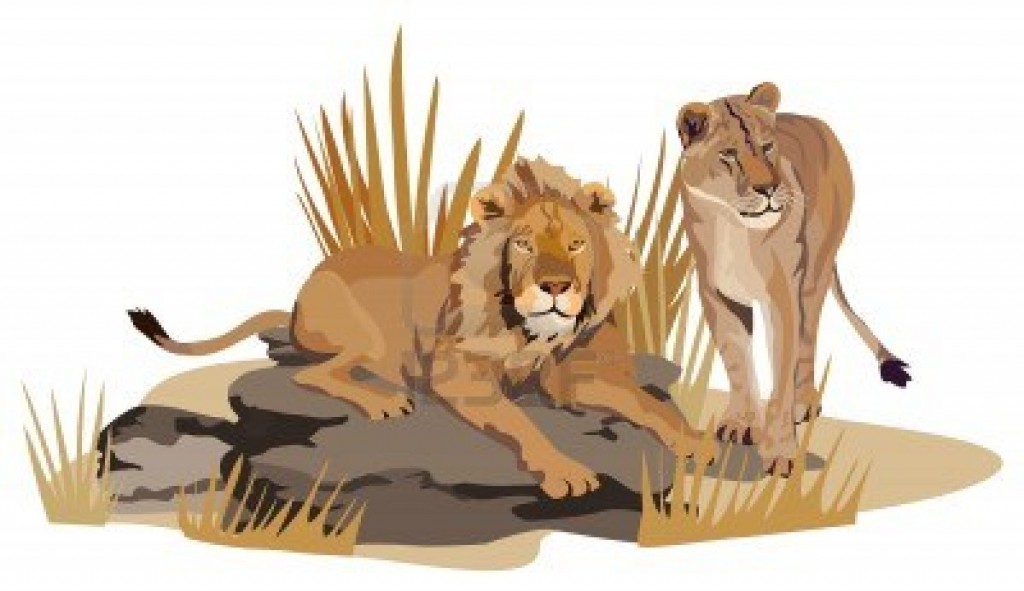 There once was a pride of lions that hunted the grasslands for wild game – stalking and preying upon the herds in attempts to bring down the weakest members among them: and often enough even the weakest of the wild herds could occasionally escape predation by being faster or more clever than the pride – which caused the pride much dismay.

But one day a new alliance of alpha males took power over the pride and decided to revolutionize their means of attaining sustenance – instead of going out to hunt the herds of wild creatures, they would draw those herds unto themselves.  “Look upon these animals that are our game” they said among themselves, “and see that they concern themselves with their own sustenance – something that we can provide them in exchange for a sacrifice of one of their members from time to time. With  this plan they set themselves to the task of securing all the prime grazing territory – allowing none to feed there unless they agreed to the lions’ terms.

Over time many of the wild beasts were beaten into submission as defiant herds were routed from the grazing lands until they grew too weak with hunger to adequately resist the power of the pride – one way or another becoming the lions’ food.  Other herds took notice of this, and aligned themselves with the lions out of fear for their own lives. Over the course of many generations these wild beasts forgot how to fend for themselves and became dependent upon the lions to guide them to pasture – this helplessness was reflected in their own appearance as they turned into sheep.

The shepherd lions learned to meet the every need of the flock – they took them to the prime meadows, led them to water, fended off other potential predators, rescued lambs from danger and even allowed the sheep to believe themselves to have a real voice in the affairs of the pride (of course, the lions ultimately held the real power – the opinions of sheep being unimportant in the big picture…).  But never did the lions forget why they did this: at the end of the day it was all about keeping their food safe until it was ready to be devoured by them: and by this time most sheep willingly allowed themselves to be sacrificed for the pride upon command of their shepherds – and the few that objected had no means to resist the will of the pride in any meaningful way.

One day the normal roaming grounds of the shepherd lions experienced a severe drought that forced them to take the sheep into unfamiliar territory – territory that was controlled by a great bear: the only force that the pride has ever encountered strong enough to pose a serious threat to themselves.  On account of the bear’s legendary strength and fighting prowess, the pride sent forth an emissary to persuade the beast to join with them as part of their flock: the eldest of the alpha males took it upon himself to meet the bear alone.

“I bid greetings to you” announced the eldest of the alpha males as he approached the den of the bear – “I come to you as a messenger of the Great Lion of Heaven and share the good news of his invitation to you.  For the Great Lion of Heaven desires you to become a part of his loving family of sheep: accept his offer and you shall never want for anything ever again – the flock will be guided to green pastures and led to still waters where you may live in quiet, uninterrupted peace for the remainder of your days.  Will you come back to the pride with me to be initiated?”

The bear simply scoffed at this offer – “if this ‘Great Lion of Heaven’ of yours is real he can extend this offer to me himself” he replied coldly.  “And even if he did come down from his perch in the clouds” the bear continued, “I would still refuse to have any part of this: I already have my every need within reach of my paws – I have the honey of the trees, the berries of the bushes, the fish of the river, plenty of water to call my own and the strength to keep all others from laying claim to these things.  Your offer does not tempt me in the slightest.”

Offended at the bear’s rebuke, the eldest alpha male lion considered threatening violence against him – but quickly thought better of it as he was no longer as powerful as he once had been in his youth. Ashamed of his failure to convert the bear he returned to the pride to nurse his wounded ego.   Upon hearing this news another emissary was dispatched – a young alpha male who was considered a shrewd lion with a swift tongue and a mind for management of the daily affairs of the flock.

This young alpha male approached the den and delivered his offer to the bear – “I see that being a member of the flock does not interest you.  However,” he continued, “I have an eye for talent and see that you would do a fine job guarding the interests of the pride – come with me and I’ll see to it that you will have access to a portion of the flock in exchange for your services to the pride: work with us and share in the spoils of our growth – you can’t resist this opportunity, can you?”

“So…” the bear stated wryly, “you wish for me to give up what I have secured for myself here so that I might have access to a small part of what you have – that I become your strength in return for a pittance?  If I come with you and give up that which I have taken for myself, I will forever be at your mercy as you decide how much access to the flock I shall have!  This is an insult to my intelligence, so I will not speak with you or anyone from your pride anymore: get lost!”

And the young alpha male returned with this grievous news – it was then apparent that there was no way that the bear would ever surrender to the pride of his own accord, so it fell upon the largest and most powerful of the alpha males to handle this situation.

The next morning this alpha male, along with several lionesses, approached the den of the great bear.  “Bear who lives in these caves” roared the mighty alpha male, “I have come to put you in your place!”

The bear emerged from the den with fire in his eyes – “I told you before, I want nothing to do with you!” he roared angrily in reply.  “This is my den, my foraging ground and my river: there’s not a damn thing in the world you can offer me to give this all up!”

“This is not an offer,” the alpha responded, “this is an ultimatum.  You will surrender your land to us and come join us or else you will die this day.”

Seeing that discussion with the lion was going nowhere, the great bear made a dash at the nearest lioness – slashing her throat with one swipe of his claws before running into the thicket.  The alpha male ordered the other lionesses to pursue, but they found the terrain difficult to traverse as it was covered in thorns and thistles: such an obstacle slowed the movement of the lionesses that the bear could easily ignore – as they had grown soft in their living.  Being shepherds, they had not given chase to wild prey in so long that they had forgotten how to deal with natural hazards.  As the lionesses tip-toed around the thorns, the bear picked them off one by one until the remaining of their number fled for their lives from the beast that was stalking them.

The bear emerged from the thicket covered in the blood of his would-be hunters and stared directly into the eyes of the alpha male that had brought them. The alpha felt a chill go up his spine as he met the gaze of the bear, but his fear was soon replaced with anger and he rushed him head-on.  This charge proved disastrous as the bear quickly pinned the alpha male under foot and wrung his neck with his own powerful jaws.

Victorious, the bear slung the carcass of his adversary over his shoulders and carried it to the territory of the pride of shepherd lions – where he flung it into the midst of the pride and demanded that they leave at once.  The eldest of the alpha males collapsed and died of a heart attack upon seeing the corpse of his champion and the swift-tongued alpha male took to flight and later died in the wilderness (as he could not hunt).  Upon witnessing the evidence of the bear’s victory the sheep approached him and bade him to be their new master.

The bear was appalled to hear this – “have you forgotten who you were?” he inquired rhetorically.  “Do you not remember how to find your own food?  Or to fend off the wild beasts for yourselves?  Or have you become so reliant on some one else to look after your needs that you have become totally helpless?”

“If that is what you have become” the bear continued, “then you have condemned yourselves to death – for I shall not guide you to green pastures, nor take you to still waters, nor shall I keep the predators at bay!  You shall do these things for yourself: and if you can’t, then know that the weak shall perish.”  And with that remark, the bear returned to his den; leaving the sheep to their fate.

With the shepherd lions no longer there to fend for them, many sheep died of hunger, thirst and predation – but those of the flock that learned from the failures of the dead pressed on and over the years they became stronger. Within several generations the sheep were sheep no longer – but rather noble creatures of the wild once again…

Azazel: A pride of shepherd lions invite a great bear to join them, as they have control over a herd of sheep that will obey their every command.

Journey to the Centre of the Earth