The Good and Evil of George Soros 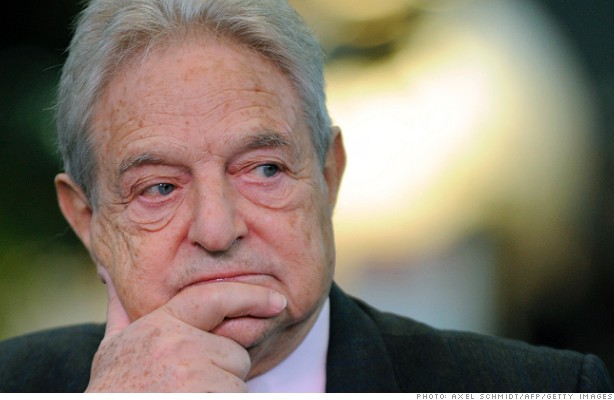 A news article, dated in late March, began taking Facebook by storm recently.  It stated that President Vladimir Putin wanted an International warrant issued against financial tycoon, George Soros.  In fact, the article insinuated that Putin was also pointing his finger at Rothschild, Rockefeller and Hillary Clinton.  The article stated that Soros used compounded Swedish and Danish currency for the purpose of attacking Russia’s stock market.  It also accused Soros of financing a campaign against Putin’s nomination as President.

Whether or not Putin made this statement concerning these Western oligarch’s is difficult to verify as there is no record in the Russian Times documents of any such reference, but there is  evidence that George Soros has been dabbling in Russia’s political affairs.  According to the Russian Times, terrorist threats arrived from Kavkaz Center during Putin’s re-election campaign, under the umbrella of Finish minister, Heidi Hautala,  who defended the center operating out of Finland, directly contravening with UN  Security Council sanctions.

The center has spoken openly for violence.  In one video clip, it  announced, “I just hope that Putin will not be stupid enough to run for election, because of course then he would be elected, there would be terrible election violations, and then we really could see bloodshed.”  Boris Barezovsky, believed to be a member of Kavkaz, and  is  wanted by Interpol for money laundering, organized crime, forgery and fraud, announced, “Putin will end up like Gaddafi.”

Hautala has ties to both Barezovsky and George Soros, who founded and financed the “Open Society Foundation”.   The Open Society is an enigma. It describes itself as a private operating and grant making foundation that “aims to shape public policy to promote democratic governance, human rights, and economic, legal, and social reform; … implements a range of initiatives to support the rule of law, education, public health, and independent media; [and] works to build alliances across borders and continents on issues such as combating corruption and rights abuses”.  Its listing for human rights advocacy is impressive, yet it apparently sees noting abusive in meddling in the political affairs of foreign countries,   The foundation stated,  “The intention was to plan how to integrate Caucasian terrorists as effectively as possible into the NED (National Endowment for Democracy), and Soros’ plan to break up Russia.”

With a value of $22 billion in assets, Soros is obviously a shrewd businessman.  It is difficult to criticize a man who has placed funding in such worthwhile organizations as the ACLU, Public Broadcasting Radio, and the NAACP, yet it is more difficult to .ignore that Soros bet against the British pound, predicting its collapse in the 1990’s, making one of his billions off it.  He is currently betting there will be a class war in America.

Soros predicts there will be riots in the streets creating an excuse for “cracking down and using strong-arm tactics to maintain law and order, which, carried to an extreme, could bring about a repressive political system, a society where individual liberty is much more constrained, which would be a break with the tradition of the United States.”

It’s troubling that the man who helped keep Wikipedia from collapsing through extensive contributions and and assisted The Occupy Movement indirectly through donations to Tides Center, a supporter of the anti-Capitalist magazine, Adbusters, is now predicting a ferocious civil clash within the United States.

Much of the blame for left-wing extremism has been placed with George Soros, generally by right wing extremists.  The no-longer-middle-class America doesn’t really care what his politics are.  When reading the Putin article, they were overjoyed because Soros is a billionaire, and Putin puts billionaires in jail.

Whether Putin made the statement or not is not nearly as pertinent as this reaction by the Western public.  The public was neither dismayed or surprised.  Comments to the article ranged from, “go get ‘em, Putin”, to “Putin is America’s new hero.”  With only a sixteen percent approval rating of the US Government’s cabinet members, if only one quarter of the US population approves of Putin, he is far more popular than any existing US Government entity.

Soros is not evil for supporting civil rights groups, urging relaxed immigration laws or advocating for the elimination of the death penalty.  What is troubling is the underlying suspicion that Soros intentionally sows the seeds of rebellion for his own capitalistic gain.  He remains a leading investor in the stock market, while his foundation is a safe haven for harboring non-taxable funds.  The far-reaching influence of the open society, which is often cloaked in very closed activities, extends into over seventy different countries, many of which are in the throes of civil conflict.

Soros claims his intention is to promote global democracy, but democracy, which means quite simply a two-party system, has taken a very strange twist in recent years.  The American public no longer see any real difference between one party or the other.  They both follow an agenda that is geared more toward special interest lobbyists than toward the well-being of the American public.

Democratic freedom has been redefined as the right to use any means on hand for capitalistic gain.  It doesn’t matter how you made your millions or billions as long as you got away with it.  Law making that actively takes into consideration the common good of the citizens has been dismissed.  The balance of power has shifted away from the public sector in favor of profit making schemes by the private sector.

Soros does not advocate for socialized programs, nor does it appear his advocacy is toward peace-making efforts.  His appraisal of a class war is inaccurate The only true social classes left are the extremely wealthy, a desperate and rapidly dwindling middle class, and a staggering percentage poor, unemployed and homeless citizens.  Perversely, the real war that has neighbors ready to stand against neighbors are issues that more correctly pertain to freedom of choice; religious or non-religious affiliations, assisted suicide, drug use, gay and lesbian rights; and abortion rights.  Issues such as unethical practices by insurance and pharmaceutical companies, water and ground contamination by energy producers, aggressive foreign and domestic policies that invade both the privacy of citizens and the rights of foreign countries to govern their own affairs  take a back seat to what should be major concerns.

Most significant of all is the lack of  effort by any of the leading powers to find solutions for resolving the debt crisis and re-establishing harmonious, thriving communities.  The message seems to be one of keeping Western society in conflict and at odds with each other.  It appears to be one of deliberately provoking hostilities that can only lead to increased violence, a repressive regime, shortages in healthy food, water and life-styles, as well as untimely death.

War is a profitable business; whether through foreign invasion or civil clash, but it’s profitable only for those who have invested in it. The bets have been laid down, and the odds are against America’s success in regaining a stable economy and creating healthy communities.  The winners will not be either right-wing fundamentalist or left-wing extremists.  They will be the billionaires who placed their bets on America’s failure.

Karla Fetrow- There is a line between promoting to causes for the common good and deliberately provoking civil unrest for capitalistic gains.