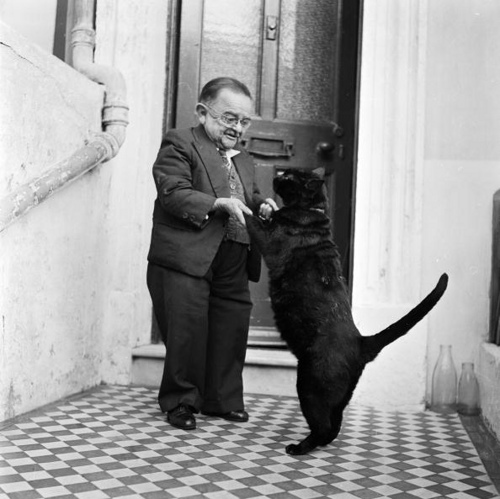 Poor Mary was getting on in years with her seventieth birthday not far away. She had been widowed the past ten years and felt the loneliness especially on cold winter nights. She lived alone in the small thatched cottage on the outskirts of the village set in the centre of Ireland where she had lived all of her life.

She was a true country woman and took all the superstitions and country beliefs seriously. She would never ever kill a snail as she believed it might be the Pooka and we all know the problems that could cause…………….. She would put her head under the blankets in bed at night if she heard anything resembling the call of the Banshee. She was even known to traipse out the country in the rain to try to reach the end of a rainbow and claim the crock of gold that was supposed to be buried at the end of it.

Most of all she believed fervently in the ‘little people’. She was forever keeping her eyes open for one and knew in her heart and soul that if ever she was lucky enough to manage to catch one she would ask not for three wishes but just one. And that was that she might live comfortably for the remainder of her life. She really needed some luck for at the moment she had precious little.

Her pension hardly kept body and soul together and her lack of savings had been caused by her dead husband Tom who had been a reckless gambler all through their married life. The thatched roof on the cottage was rotting away and badly needed a new one before winter arrived. The walls, both inside and out needed a fresh coat of whitewash whilst the bits and pieces of furniture that she still had were full of woodworm.
She spent her evenings well wrapped up in front of the fire with her only companion – her old tom-cat Mousey – to keep her company. Even he was looking a little bit the worse for wear and the patch of mange on his back would have to wait until she could afford another visit to the vet.

“Well now me ould darlin’” she spoke aloud to Mousey “and what exciting things are we going to do tonight?” The cat merely yawned and gave a long stretch. “Arrah sure now, the good Lord will provide with a little bit of good fortune thrown in for good measure” she spoke aloud but again the cat took not a blind bit of notice of her. He merely looked at the saucer nearby which was empty of milk.

Mary dozed off and had pleasant dreams of days long gone. She awoke about an hour later feeling chilled. She saw that the turf fire was almost out. “Damn blast yeah” she swore as she tried to stand up. She took the old empty bucket that served as a scuttle and slowly and stiffly made her way towards the door and around the side of the house to get some more sods of turf.

As she stood outside the door she felt the cold even more so. The sky was clear and the hood around the full moon told her that there would be a heavy frost later in the night. As she continued towards the heap of turf she thought that she saw something move over by the pile. She stood still thinking it might be a rat or some other wild animal but as her eyes became accustomed to the dim light she saw him clearly. There he sat, as bold as brass, with his back towards her, dressed in his fancy green jacket and red hat……………a leprechaun.

Mary had a sharp intake of the cold air and quietly set down the bucket. She moved silently up behind the little fellow and with one swift swoop she grabbed him.

“I’ve got you, you little blaggard and I’ll have me three wishes if you please” Mary declared as she firmly held the little fellow in both of her hands. As soon as the leprechaun realized that he was captive, a twinkle appeared in his eyes. “Sure now, there’s no need to strangle me, is there? You can have your wishes but firstly, is that your gold sovereign behind you on the ground?” the little fellow nodded towards the ground.

“Ha, ha, no, you little rascal, I’ll not fall for that one. I will not take me eyes off you for one single moment” Mary laughed. “Alright, alright” the leprechaun said quietly as if resigned to the fact, “Let me have your first wish”. Without hesitation, for Mary had practiced this moment since she was a young child, “I want to live in comfort for the rest of my years – and I mean in true comfort”. The leprechaun clicked the fingers of his right hand and in a blinding flash, the cottage turned into a beautiful modern bungalow with a slate roof and freshly white-washed throughout. If Mary had dared to take her eyes off the little fellow she would have seen through the window that the interior had been beautifully furnished throughout. There was even a thick carpet on the slate floor. She would indeed have been shocked if she had also seen the large oak table in the centre of the living room covered in shining gold sovereigns.

“And your second wish?” the little fellow asked impatiently. Mary looked down at the wrinkled skin of her hands as she continued to hold him firmly. She quietly said “I wish to be young and beautiful again”. The leprechaun spoke harshly “Speak up woman: I can’t hear a word you are saying”. Mary raised her voice this time “I want to be young and beautiful”. “Oh I see” said the leprechaun “I suppose it’s so that you have more time to spend your fortune. Alright then”.

This time when he clicked his fingers, there was what looked like a beautiful rainbow. Mary had changed into a beautiful young lady of eighteen with peach-like skin. She was now wearing beautiful clothes and jewels. Her hair was once again jet black and silky. She noticed that her aches and pains had also disappeared.

“Come on then woman, come on. I haven’t got all night” the leprechaun called angrily, “give me your last wish”. This time Mary was even quieter than before. “I want a young man” she whispered. “You want what?” shouted the fairy. “I want a fine young man” Mary repeated again in a very low voice. “What in the name of the good Lord are you saying woman?” the leprechaun again asked. This time Mary shouted at the top of her voice “I want a blinking fine strong handsome young man”. “That’s better” said the leprechaun, “sure there is nothing like a little romance in your life. Usually that’s the first wish of most women”. With that he began to look about.

Mouser, the old tom-cat had come out of the house on hearing all the shouting and commotion and stood not far away from Mary and the fairy. The leprechaun nodded towards the cat and clicked his fingers. In a flash of lighting there stood on the same spot a handsome strong young man with rippling muscles. He had blonde hair, blue eyes and a beautiful smile.

The leprechaun wished Mary good luck and she let go her grip. She swooned over to the young man and took him by the arm and led him into the house. As they sat on the new sofa, Mary whispered to him in a passionate voice, “Give me a big kiss and a big cuddle”. As he did so, he whispered softly into Mary’s ear “I bet you will be sorry now that you ever took me to the vets”…

Mike- Never underestimate the Fey, they are incredibly tricksy.

The Parable of the Bear and Shepherd Lions