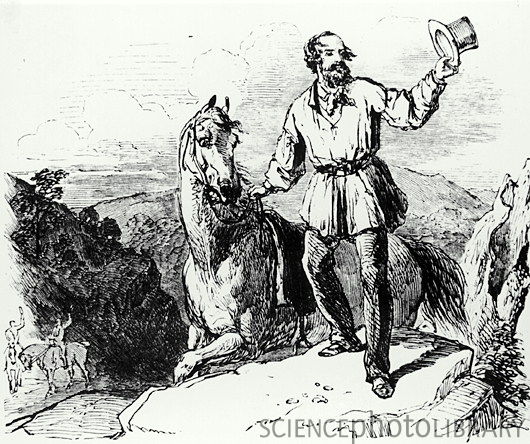 The Story of ‘Somebody’s Darling’….

By: Mike
In the heart of Dublin stands a large statue of Daniel O’Connell – one of Ireland’s greatest 19th century political figures. He was a truly great man of his time. Close by, straddling the River Liffey is a bridge dedicated to him and known as O’Connell Bridge. Surprisingly, half way across the world, 11,600 miles away stands another bridge dedicated to the great man. This Daniel O’Connell Bridge is situated in the Otago region of New Zealand. The origin of the name is unknown but believed to have derived from the numerous Irish immigrants who moved to the area in the 1860’s.

Whilst the Great Famine ravaged Ireland during the 1840’s, besides the great number of people who died from starvation, literally millions departed Ireland’s shores. A great many took up residence in England, in particular Liverpool and London. Others sailed further afield – to North and South America, Canada and Europe.

Those who were now resident in Liverpool without doubt received the most recent news from distant places through the crews of ships that frequented the famous port. It soon became known that many who sailed to America were more or less cajoled into joining the army there. They were not welcomed as most were illiterate and malnourished……………..

However, news of the many ‘gold rushes’ of the time arrived and with the promise or at least the expectation of great wealth, hoards of especially young men made their way to their own personal ‘El Dorado’.

When in 1860, Christopher Riley, an Irishman and Horatio Hartley, an American, discovered gold in the Otago area of New Zealand, news eventually reached Liverpool. They had in fact kept the find secret and had amassed 1,392 ounces of gold before they reported the fact to the chief gold receiver in Dunedin. Suddenly the entire area was swamped with prospectors. In fact, at the height of the gold rush, over one third of the miners were Irish.

One such prospector, William Rigney, an Irishman, whilst prospecting at the Horseshoe Bend diggings in Central Otago in 1865, discovered the dead body of a young man who had apparently drowned in the Clutha River further upstream. He was taken to the local mortuary. When the body was not claimed, Rigney arranged a funeral at his own expense. Many of the other miners attended.

To mark the grave, Rigney placed a wooden marker upon which he inscribed the words “Somebody’s darling lies buried here”. Throughout his life, he tended the grave and placed flowers upon it.

But that is not the end of the story for when Rigney himself died in 1912, he left instructions that he be buried next to the stranger. The site in the stony area is known by locals as “The Lonely Graves”.

When I first heard this story I was a little surprised but having given it a little thought, I think that I can now fully understand his reasoning. You see, Rigney would have lived through the starvation times of the Great Famine back home in Ireland. He would have seen poor emaciated people trying to make their way to the various ports to leave. Most importantly, he would have seen thousands of those same victims being buried in unmarked graves by the wayside with no one to grieve for them.

As his inscription implies, the stranger was ‘Some Mother’s Son’ and indeed a ‘Darling’ …………………

Mike- To mark the grave, Rigney placed a wooden marker upon which he inscribed the words, “Somebody’s darling lies buried here”.

At the Point of the Gun