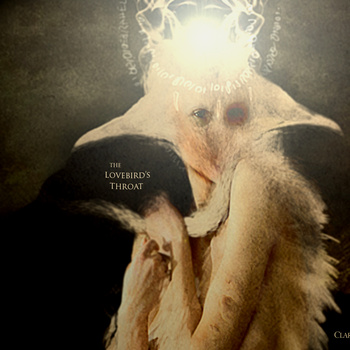 The tags on Clara Engle’s new realease Lovebird’s Throat describe this album as: Apocalyptic Folk-Blues and Experimental Folk-Gothic.  It is at once slightly sweet and at the same time slightly disturbing.

The beginning track Not Knowing, a reflective love song lulls us into reflecting on our own love lives and is somewhat therapeutic in that you are swallowed into it almost without thought. In Song To The Sea Witch, I think she outdoes herself.  She manages to bring the sound and feel of a Troubadour of olde to a very contemporary song and it is in this song I think she finds that “Experimental Folk-Gothic”; dare I say medieval sound.

Married to the Bone reaches way down…all the way to the south; it reminds me of spirituals and call and response songs that were kept alive in families for generations. It’s soulful and a bit sad seemingly lamenting misunderstanding in relationships.

Lovebirds  is a bit more dangerous, depicting a love story that hurts and bleeds. To me is the saddest of this collection.  As her lyrics state, “The same fire feeds love and rage.”  Also the comparison of a love relationship to the mythological Hydra while clear, is just in some way incomparably sad.  However at the same time, I feel a strange affinity to this song.  There have been so many relationships, mine as well as people I know in which the dark bits aren’t.  Not everything about love is pretty after all.  Distinctly Appalachian influences are heard in this one, it sounds like a mountain tune set to an off-kilter back-drone.

Adding to the feel of the album is the amazing and fantastic artwork which Clara states was given to her by an artist who lives in Turkey, whom she’s never met, but has been following her music for a few years now. The artwork itself is incredible and disconcerting.  A fantastical image that flows and hold on to secrets in its form begging you to ask, “What is it?”

Maybe you could give a listen and then ask me any questions that come to mind?

When last we spoke to Clara, the Toronto native was fundraising for another album, Ashes and Tangerine , which is yet to be released.  In that time she has released a recording of two Jason Molina covers as a charity and this newest project, The Lovebird’s Throat, which was recorded in one day, in Gloucester MA, in March.

When asked her defining influences at the time she introduced us to Sephardic Jewish music  and Armenian music, neither of which make much of a showing her.  She has gone completely in a different direction.  This at the end of the day is wonderful. It puts on display her inherent curiosity and creativity.  After all, getting stuck is a trap many singer-songwriters fall into; I do not think this will be happening with Clara.

You can listen to and purchase Clara Engel’s music at Bandcamp @ http://claraengel.bandcamp.com