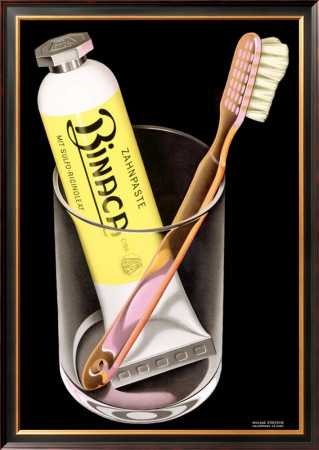 Back when I was a little kid, toothbrushes were kind of infra dig.

I don’t mean there were no toothbrushes, of course. But, to the average ultra-parsimonious Bunglee middle class family (those days, the early 1970s, the middle class was still the middle class and hadn’t yet evolved to today’s Great Indian Muddle Class) the thought of shelling out money for a foreign-designed plastic contraption which would have to be thrown away in a couple of months, not to mention horrendously expensive tubes of toothpaste, was disheartening. And as for fancy things like floss, who’d even heard of them?

This wasn’t just for dental care products. Bunglees came up with all kinds of ingenious explanations for not using modern conveniences. I remember how reluctant my grandmother was, for example, to use an electric fan. She said it produced an “electric wind” which was bad for health, so she used to cool herself with a hand-held wicker fan which produced little to no air movement. It was light, but after half an hour’s waving around, one’s wrists felt as though they were about to fall off.

There were many similar examples. I don’t think it was just about parsimony; a lot of these people were actually terrified of modernity, of anything that was new in their closed-in lives. They wouldn’t clip their fingernails or go on a journey without consulting an almanac. They wouldn’t even think of going to a new place on vacation; the wife would gather up her brood and vanish to her parents’ place, to re-emerge when the schools restarted. They’d slather themselves all over with mustard oil before taking a bath, rather than use soap. But their attitude to dental hygiene – to toothbrushes and pastes – perfectly symbolised their attitude to it all. 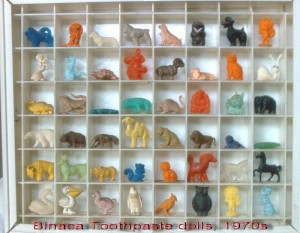 Oh, there was toothpaste – Binaca was the brand of choice then to us kids, because each box contained a little rubber or plastic animal toy alongside the tube. (I built up a huge collection of those plastic animals over the years – there must have been well over a hundred, including a little purple seal I particularly liked. Then while I was in school, my mother gave them away to some kid or other. I wonder how long they lasted with him.) There was Forhan’s, touted as having been “invented by a dentist”, but it tasted horrible and didn’t foam, so nobody much used it. And for a brief while in the late 1970s there was something called Signal, which somehow or other squeezed out red-and-white striped paste. That was popular, of course, with the kids; but I don’t believe I ever got to use any before the red part of the paste was discovered to be carcinogenic and Signal quietly vanished from the market.

Time passed. We grew older, the seventies melted into the eighties. Television arrived and taught us that there was a world outside. Binaca turned into Cibaca and the animals no longer inhabited the packaging, Forhan’s disappeared, and Colgate dominated the market to the extent where it became a synonym for “toothpaste”. Nowadays I often get people asking me if they should “Colgate their teeth with Colgate or some other Colgate.” But all that came later.

Back in the early to mid seventies, though, the pastes were still, basically, considered to be for the hoity-toity. Many people used other things to clean their teeth. I once had the privilege of watching someone use powdered coal (yeah, you read me right – coal) to scrub his teeth clean. Salt wasn’t all that unusual either. As recently as the early 2000s I read a beauty column where a beautician named Suparna Trikha Dewan was telling her victims clients to scrub their teeth with a lethal mix of lime juice and salt to remove stains. But most people used one of two means of cleaning their teeth.

The first was one of any of the brands of “tooth powder”. There was Colgate, again, in a red and white tin can with a red cap, which was still being advertised on Indian TV as recently as the late 1990s. Then there were the less expensive varieties. One, which I remember with particular loathing, was called “Monkey Brand”, came in a grey plastic container, was black, and tasted sourish and gritty. Another was brownish-yellow and claimed to be of ancient herbal origin.

These tooth powders could be used on toothbrushes in lieu of pastes, but the more usual method was to spread them over your index fingertip and rub said fingertip all over your gums and teeth. Pastes were also used similarly, and in fact some people today still use them that way. Quite a lot of people, actually. But, when all was said and done, these pastes and powders were all “foreign”. There had to be something more indigenous.

That something was the neem twig, or daatun as it’s called in Hindi. Actually, pretty much any twig would do, but the twig of the neem tree was the preferred one due to its alleged medicinal properties. These twigs were (and as far as I know still are)  sold in bundles on railway platforms, stripped of leaves and cut to pieces about as long as the average pencil. The idea was to chew on one end until it splayed out and then scrub one’s teeth with it. No paste, powder or even water necessary!

I remember one time when I was at college in Lucknow and coming back home by train. There was this old Muslim man sitting next to me, the mullah type with white beard and lace skullcap. In the typical fashion of Indian railway travellers, he began quizzing me on where I lived, what I was doing, and so on. And when he found out I was a dental student he perked up at once.

“Dentists are all wrong,” I remember him saying, in Hindi, beard wagging. “You people talk about toothbrush and Colgate, but these things are not needed. They are foreign and our ancestors knew much better. Neem sticks!” He held one up before my eyes. “That’s what we need. Neem sticks are the best. I’ve used only neem sticks my whole life long. Look!” He leaned towards me, his mouth yawning open, exposing a terrifying array of eroded, blackened teeth.

Though I say it myself, I’m proud of my self-control. I didn’t contradict him. I didn’t in fact, say a word.

Also, I managed not to throw up in his lap.

For more from Bill The Butcher visit his blog @ http://bill-purkayastha.blogspot.com/

Bill the Butcher- Oh, there was toothpaste – Binaca was the brand of choice then to us kids, because each box contained a little rubber or plastic animal toy alongside

The Time Is Now: Zombie Apocalypse Has Begun!