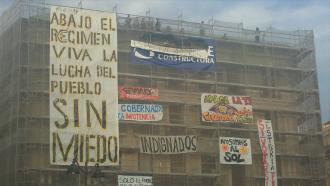 “Spanish Spring”, some people are already calling it that as if it were the title of a film by Garci. On May 15th government forces violently repressed a peaceful march and arrested nearly a score of individuals, young Spanish people took to the streets for the first time and since then have not returned home.

Calling themselves the 15M, they represent an unexpected collective awareness-raising, brought about by social networks not covered by the traditional media, and encouraged by the lack of political representation of a society, going through its death throes at each month-end with a lifetime mortgage and in which almost half of those under age 30 are unemployed.

“It’s not the fault of the politicians”, they say. The blame is placed on a global recession that has hit us, the Spanish people, apparently to a greater extent than everybody else. Why us more than others? Why are we unemployed and why do we keep quiet about it? And so, because we’ve put up with it, politicians have filled their pockets and have controlled our economy unconsciously and without sound judgment, without looking closely at what was happening in the streets, because before, nobody was out there.

What are we doing here?

But let’s probe a little deeper into the wound and ask: who is electing them? Politicians, I mean. Let’s assume we are. Because that’s why we live in a democracy … isn’t it? Well then, there is something I do not understand, because it turns out that looking at the miscellaneous forces that govern throughout the entire country, it seems that there are just two ballots although there is a fairly large number of lists of candidates running for office. This leads me to one question: where are the votes going of those people who don’t share the same principles of either of these two political programs that, ultimately, always hold to the usual policy in favor of the failure of the poor and the wealth of the rich?

There is no need to look far to find the explanation: the election law dating from 1985, still in force, is to blame. And that is because the votes are not worth the same everywhere and the seats do not involve the same effort for minority parties as for large ones. No, ladies and gentlemen, voting is neither comprehensive nor fair. The electoral law in Spain is not democratic and this is why #democraciarealya has been one of the hottest trending topics in that 21st century megaphone called Twitter.

Many spaces for collective thinking

Regardless of the election results which have given a clear victory to the right, winning even in historically socialist municipalities and communities, the campers of Puerta del Sol are still pursuing their fight. Some of them have already spent more than a week in tents but they assure they are ready to stay there as long as necessary until some change happens.

Work groups have been structured: posters workshop, food area, infirmary… Several groups have taken advantage of this platform to get organized to claim their rights, such as musicians and feminists. Media, neighbors and anonymous persons supply food and other facilities. There is a Wi-Fi area and a library whose shelves are already crammed with donated books. Physical fatigue shows up but claims keep coming in every square, in each meeting.

No, this is not a protest against something concrete, collective thinking is branching off in many directions. What is important –so say the organizers– is to create an atmosphere of nonconformity, so that they (the politicians) will see that they cannot do with us as they want. And the avalanche that began as the initiative of a few is becoming increasingly wide-spread and now organized demonstrations are starting to show up worldwide.

From Madrid to Vietnam, the world turns its attention to the #Spanishrevolution with interest, we do not know if it is with a desire to emulate us, but certainly with curiosity to know on the one hand how long this will keep up and on the other hand, as the banners say, “If they don’t let us dream, we won’t let them sleep”.

Maribel Sanz- Calling themselves the 15M, they represent an unexpected collective awareness-raising, brought about by social networks not covered by the traditional media