As if the U.S. hasn’t been through enough financial bad times we are about to see one more problem that could send our economy further into hell.  We have a drought looming on the horizon that could send food prices soaring.  Sometimes, I imagine the U.S. economy and it’s laughable attempt at healing much like a mental health ward. 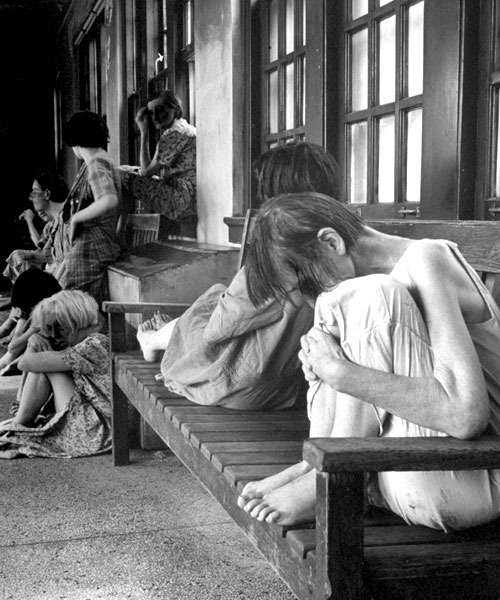 The U.S. economy is already staggering and holding onto the rail for balance.

And now, besides the decline of the Euro looming on our future, we have a huge drought and above normal temperatures hovering over us that will send our economy spiraling further.

When we recover, will we advance into the global arena with a manic depressive shuffle, trying to simply function instead of functioning as a healthy leader in the world?

Nearly 81 percent of the contiguous U.S. is “abnormally dry” or in drought, weather.com reported in analyzing the data, while 64 percent was in some degree of drought, up 3 percentage points from the previous week. About 42 percent was “severe” or worse.

Other dire indicators for food production:

(Source:  Drought widens over past week, unlikely to yield through October) 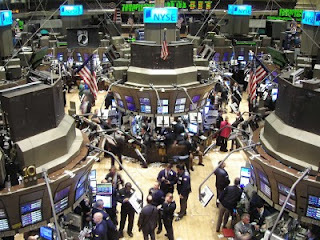 The bipolar mania of the Wall Street boom and rip off schemes 80s and 90s has given way to the current set of lows and hopelessness as more and more average Americans go without.

Maybe it really was too much of a good thing, back then.  Certainly, Americans were drunk with needs for names like Nike, Apple, Starbucks and other brand names that sent us into a consumer head spin.

Sometimes, I wonder if it doesn’t all come down to the fact that we had too much money available to spend, even though it was borrowed against our homes or from our savings accounts.

“Having too much capital leads to incredible waste.”

In an interview, Entrepreneur Yanik Silver defines the business attitude of the past; an attitude that led to nearly losing his company.  In case you are wondering who Yanik Silver is, here is a slice about him:

Yanik Silver is an entrepreneur who successfully bootstrapped eight different product and service ideas hitting the million-dollar sales mark from scratch without funding, taking on debt, or even having a real business plan.

His ideas on business of the past reflect the laissez faire atttitude that many of us approached our personal futures with, before our country’s financial collapse.

“While my concurrent company was grossing over $3 million at the time, I sunk about $400,000 into this new business without even batting an eye. Some of the capital went to creating the exceptional experiences, so that was an investment of sorts. But much of it was lost to some expensive hiring mistakes, like bringing in highly compensated people before we even had a need for them, or not having a trial period to accurately measure their results.”  (Source: Too much capital passion is a bad thing)

I am reminded of the days before all of this financial collapse.  The days when real estate prices were illogically too high.   When people suddenly couldn’t go without Starbucks in the morning.  When children couldn’t go to school without wearing certain name brands, even though children had been doing that for years.  I recall the second mortgages people took on their homes to pay for all of this.

I think the following statement defines much of what I am talking about.  Americans and our denial of what could happen:

“If I had taken the time to step back and assess a bit more, I might have heard the huge sucking sounds coming from my wallet. Instead, my passion made me deaf to the sad sound of my capital melting away.”  (Source: Too much capital passion is a bad thing ) 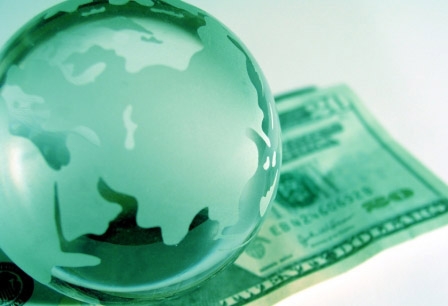 Already, 23 million Americans are out of work. Obama is begging Congress to pass legislation to create jobs by fixing up our country’s infrastructure and hiring state and local workers to do so.

According to the Bureau of Labor Statistics unemployment figures look like this:

The number of long-term unemployed (those jobless for 27 weeks and over) was essentially unchanged at 5.4 million. These individuals accounted for 41.9 percent of the unemployed.  (Source:  Bureau of Labor Statistics Employment Situation Friday, July 6, 2012) 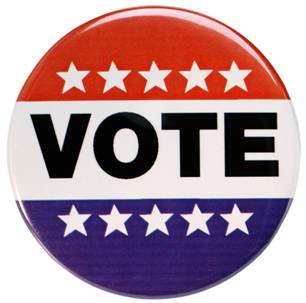 Our presidential candidates appear to have some form of dementia-related psychosis as they hurl insults towards each other’s experience over finding economic solutions; instead of working together to fix things.

We now have a drought to add to our economic woes that should send them into a new mania as they try to blame each other for that.

So what will happen now?

The National Weather Service’s Climate Prediction Center says the drought that has affected nearly 81 percent of the U.S. will not be going away until around October.

In areas like the Midwest, crops are dying and/or being stunted by the current drought.  This has affected our nation’s production of beef, corn, milk, soybeans and plenty of bumper crops planted by farmers this year.  And many will face bankruptcy as the result.

Couple this with other economic concerns and it spells some hard times for Americans in the 2012 – 13 year.

Forecasters have called the drought the most widespread since 1956, though 1988 was worse in terms of crop losses due to an extremely dry year for the Midwest.

Economists are already predicting price increases for staples like milk and beef as scorching heat and drought wreak havoc on America’s corn crop. Now, beleaguered consumers can add gasoline to that list.

“We’re pretty well hooked on ethanol,” said Bruce Babcock, professor of economics at Iowa State University. “It’s 10 percent of our gasoline supply.” The complexity of the market makes it hard to predict exactly what this will mean for drivers, but Babcock estimated the impact of ethanol, which is derived from corn, among other grains, could be as high as 15 cents a gallon.  (Source:  Gas prices may go up to because of drought)

Maybe it’s time to follow the model of North Carolina; one of 13 states to win a gold star for “strong, data-driven evaluation of their tax incentives.”

North Carolina officials won kudos for authorizing a research team from the University of North Carolina to access confidential tax and employment data. The researchers discovered that companies benefiting from taxpayer-funded incentives were adding jobs more slowly than businesses that weren’t on the public dole.

A study by Louisiana found that some companies being rewarded for job creation were just displacing existing jobs in that state.

The important lesson from the Pew study, however, is that spreadsheets and commissions aren’t enough. Tough decisions and meaningful policy changes are needed.

When North Carolina lawmakers realized they had approved many tax credits and deductions without establishing goals, they rewrote the rules to ensure public funds were being used to create quality jobs with high wages and to hire state residents in distressed communities.  (Source:  Editorial: Counting every dollar in tax incentives) 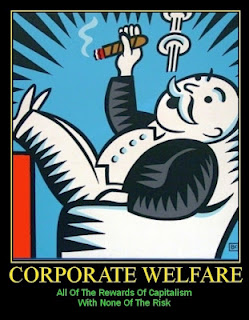 Look…we are tough on individuals existing on the public dole.  Why aren’t we equally as tough on businesses doing the same?

The U.S. economy may be slowing to a crawl, but a lot of individual companies are richer than ever. They’re being cautious about how they spend their cash, though.
“Companies are generating and maintaining more cash than they have aggregate uses for,” says Rick Lane, a senior vice president at Moody’s.

In a recent report, Moody’s said the 1,600-plus U.S.-based companies it rates had $1.2 trillion in cash at the end of 2010 — 11.2 percent more than they did a year earlier. Companies that have a lot of cash can use it to invest and hire. That’s what Caterpillar is doing, says spokesman Jim Dugan.

Take a single mother collecting welfare and you’ll find her associated with programs designed to help her re-enter the workforce, things like AIM, GROW and other programs to get these women back to work.

So, why aren’t we demanding the same for businesses who take public assistance?  Why not place them in mandated programs to teach them how to hire Americans who are paying them incentives?  Maybe if they don’t like this loss of freedoms they will do the right thing.

Companies can borrow money very cheaply right now, so instead of paying off their debts, they can sit on cash as long as possible. But there’s a more basic reason companies are hoarding money: The U.S. economy simply isn’t growing enough.

The labor market is weak, which hampers consumption, notes Charles Biderman, chief executive officer of the research firm TrimTabs. “So without growing income, where’s the money to buy more stuff?” he says. “Absent a change in demand, the fact that companies have all this cash, well, good for them. It’s not going to help us.”  (Source:  Companies Sit On Cash; Reluctant To Invest, Hire)

Can you believe that?  He claims the “labor market is weak which hampers consumption” and then, has the nerve to say that this justifies companies refusing to hire and sit on cash?

Instead, these companies are hiring overseas:

Moody’s Lane says a lot of American companies make more and more of their profits overseas in fast-growing places like China, Brazil and India.

“What we’re finding is a higher percentage in dollar amount of cash across many parts of the corporate universe is being generated and maintained overseas,” Sundaram says.  (Source:  Companies Sit On Cash; Reluctant To Invest, Hire)

Then, let’s tax the shit out of these companies who wish to do business inside the U.S.!   Obama got this one right.  It’s time to end the tax breaks to these greedy companies.

President Barack Obama is renewing his call for Congress to close tax breaks that reward some U.S. companies with overseas subsidiaries, a proposal that has raised concerns among some lawmakers in the president’s own party.

In his weekly radio and online address, Obama said the tax breaks encourage companies to create jobs and profits in other countries.

“There is no reason why our tax code should actively reward them for creating jobs overseas,” Obama said. “Instead, we should be using our tax dollars to reward companies that create jobs and businesses within our borders.”  (Source:  Obama: End tax breaks to stop overseas hiring)

It’s time to come back to responsible money management.  Both personal and corporate responsibility!  No more corporate welfare without accountability.  No more irresponsible lending to individuals trying to live beyond their means.  Just sensible accounting and investment.  Because, if we don’t, the next problem like the drought we are losing crops to may bankrupt America, completely.

Jennifer Lawson-Zepeda-As if the U.S. hasn’t been through enough financial bad times we are about to see one more problem that could send our economy further into hell