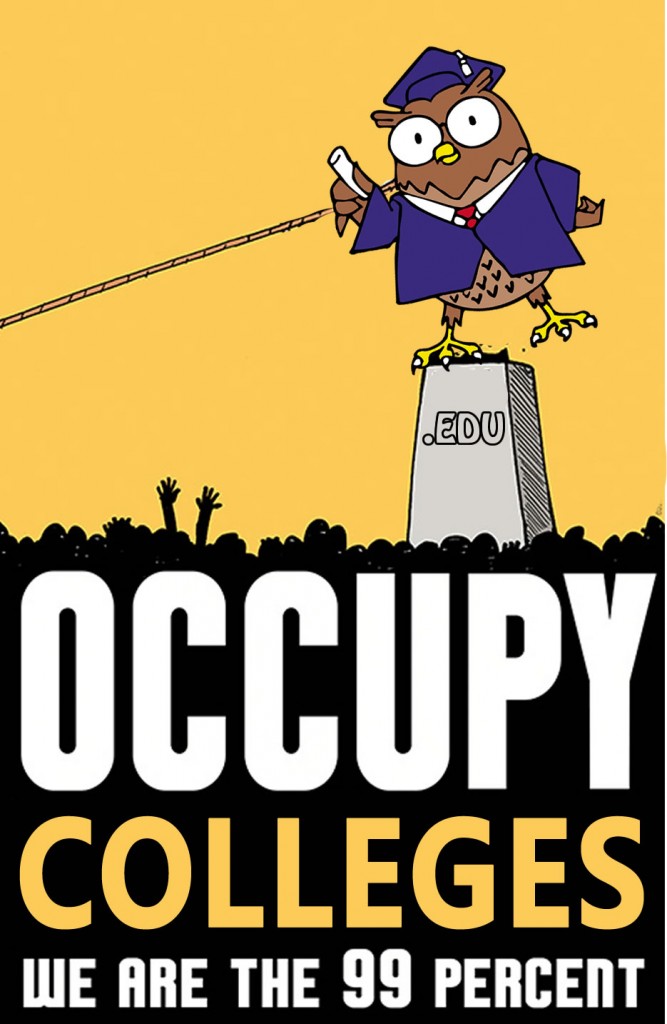 Wow!  What a great world we live in, eh?  A world where those with the most vote to give themselves more!  I’m telling yoooouuuuu….this capitalism is great stuff!

Cal State Presidents and their proposal to raise salaries for incoming Presidents at three campuses, instead of helping students is a thing of beauty, isn’t it?

This type of ploy to ignore state efforts to freeze salaries demonstrates the power play of those in high positions.  Such power!

After all, they can vote on hiking their salaries while the rest of California employees sit around and hope the wage freeze will blow over, and then, hope these presidents will see their merit and offer them a piddly few cents an hour to make up for what they missed during the wage freeze.

So let’s get down to the nitty gritty and see how this works, shall we?

The Board of Trustees and the student protesters outside of the California State University chancellor’s office are at odds.  A committee of the California State University Board of Trustees on Tuesday approved pay raises for several incoming campus presidents despite criticism from students and faculty that the money would be better spent on academic programs.

The salary packages for four incoming and three interim executives were the first under a new policy that freezes state-funded pay but allows individual campus foundations to supplement compensation up to 10%.

So here’s a question?  When policy freezes state-funded pay shouldn’t this include EVERYONE?

Ohhh, I get it.  If you are one of those special people, with the title of “President,” then, rules like pay freezes don’t apply to you, eh?  The vote on executive pay follows skyrocketing tuition; but that’s just a little thing nobody should concern themselves with.

Executive Vice Chancellor Ben Quillian told the board that the 23-campus system faces deficits ranging from $177 million to $427 million for the 2012-13 fiscal year.  The final amount will depend on whether voters approve tax increase measures in November and whether CSU accepts a “tuition buyout” deal offered by the state Legislature.

However, it approved salaries for four new campus presidents, two of whom were given the maximum raises of 10 percent, or $29,000, over the outgoing presidents’ salaries. All four will receive a $1,000 monthly car allowance. Harrison and Cropper receive free campus housing, while Morales and Wong each receive a $60,000 annual housing allowance.  (Source:  CSU mulls fiscal woes, but OKs president pay hikes)

So somebody please tell me why only CERTAIN folks get pay raises during a wage freeze for state employees, and others are told to wait.

Well, all I know is that this reeks of something!  One of those things that Occupy Wall Street talks about.

Education has always been the domain of the elite, in the U.S.  But this new wage freeze issue goes to prove where our priorities are, surrounding education.

After all, if you aren’t rich, aren’t you supposed to be happy with trade schools?  That IS what our student tuition rates say, isn’t it?

There is a movement that is taking the bulls by the horn.  It is called OCCUPY Colleges, and they are attempting to take back education and ensure it remains available to all.  And here’s what they are doing:

As you are likely aware, a movement of protest against the overwhelming corporatization of our nation, greed on behalf of bankers on Wall Street, the inequality among differing race, gender, ethnicity, and socioeconomic groups, the immorality of past and present politicians, and the decline of education and health has swept the nation–in what started off as a few hundred individuals claiming their occupancy of Zuccotti Square, New York until the previously stated situations changed in our American society. To many youth in our generation, especially those crushed by student loan debt and rejected by a job market with no opportunities for young graduates, this growing movement is truly the most important thing in the world. In solidarity with what is now referred to as Occupy Wall Street, I respectfully ask for you to join my fellow students and me in what will undoubtedly be one of the largest nationwide teach-ins in the history of this country.

I cannot adequately stress the importance of our participation in a peaceful movement that calls for civil disobedience in the most proactive of ways. The dialogue of Wall Street, which can be briefly summarized as, in its own words, “inspiring conversation, discussion and debate” around topics like those mentioned previously, calls not only for our support but our participation. In doing so, it is greatly believed that knowledge held by individuals of your status—professor—is incredibly invaluable in moments like these; which is why I and my fellow students would like to ask you to participate in this movement by enlightening others on the pressing issues of our economy, political arena, social structure, health, and education. We ask for you to consider this offer to teach those who wish to be taught, to inform those who have yet to understand our dilemma, to give a voice to those who may not have the power to speak, and to encourage those who may be afraid to stand up for what they truly believe in. Please let us know if you would like to be a panelist/speaker in our Teach-In, scheduled for Nov. 2nd and/or Nov. 3rd, to discuss why the Occupy movement is happening and what next steps the movement can take.

If you wish to participate, inform us of the times in which you would be available to lead a discussion on Nov. 2nd or 3rd, so as I am able to coordinate ample time for your speech and questions that may follow.

It’s time to stand up and unify with this group.  Education should not be something only available to some.  This is class discrimination and it discards great minds.

If we want to raise our country up from the adversity of our economic recession, it’s going to take educated, stellar minds, a generation of students willing to work on economic issues from the standpoint of fixing the problem, not stuffing their pockets.

If you support any of the OCCUPY movements, then you should support this!   After all, why is it so urgent that Tomás Morales of CSU San Bernardino and Dianne Harrison of CSU Northridge each get a 10 percent pay increase while the rest of state employees wait for the economy to get better?  Are these people really that important?  Are they God?

Jennifer Lawson-Zepeda- It’s time to extend the ideal of Occupy to the College Campus.