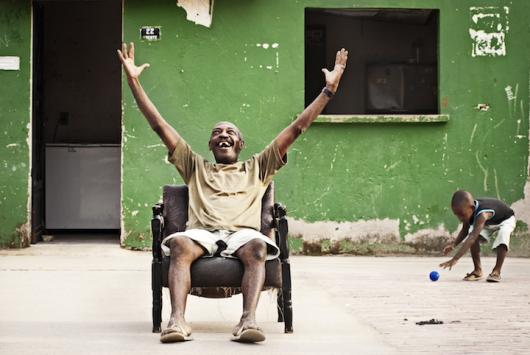 Subersify, in association with their new affiliates, Micmag presents  a world tour with the German photographer Michael Wagener. After Laos, China, and California, Michael arrives in Haïti. And what a surprise with the NGO there… strange way of life, in their 4 wheel drive who never stop on those dusty or muddy roads.

I am still on my journey but I did not expect that the last two months would be so different, because of my previous experiences. After the culture shock during the first weeks in San Francisco, I had a problem: I forgot my driver’s license. So, in a country in which the traffic system is based on having a car, I could not rent one. Yeah, there are Amtrak trains and Greyhound buses…but when I asked my American friends how it worked, I discovered  nobody had any idea on how to travel by bus or by train. I decided to buy a bicycle and cycled down Big Sur. I remembered all the old Chinese people carrying everything on their old bikes and, when I thought about that day, when I carried this sweet Italian girl on my rental bicycle through the whole Beijing, I said to myself: “if you can carry a 110 lbs Italian girl…you can carry your backpack as well”.

“Hollywood :I discovered that I did not need the glamour of this illusory world”.

I had a wonderful 10 days on the Highway Number 1 from SF to LA, following the Pacific coastline. Wherever I arrived with my bicycle, it was an eye-catcher… Nevertheless, cycling is still not very popular in the States and sometimes even dangerous. It seems that a bicycle can be a symbol of change, which some US citizens do not like. Therefore, I had to deal with angry drivers, who tried to kick me off the road. On the other hand, I had nice conversations about a country which recognizes that it is not the first Nation anymore. And when I arrived at my destinations, Hollywood and LA – I am a great movie fan -, I discovered that I did not need the glamour of this illusory world.

Afterwards, I decided to take a plane to visit a friend in Haiti. Haiti? I expected nothing when my plane arrived in Port au Prince. Of Course, I had heard about the earthquake that killed around 220.000 people but, after being in the US, I probably had forgotten that I would go back to another poor developing country. Nonetheless, as I saw thousands of small metal buildings during the landing, the feeling of being in a new adventure immediately started. Tiziano Terzani was right when he said that traveling by train is the best way to explore a country but that flying immediately shows you the difference between cultures.

Haiti could be a touristic place – beautiful beaches, wonderful coral riffs and a tropical climate – but until now it is only crowded with foreign people working for hundreds of different NGOs or for the UN on missions to rebuild a broken country. That is why it was a surprise when I answered: “I am a tourist!” to a member of MSF that had asked me what I was doing there, while I was at a small seafood restaurant in Leogane, Haiti. “I never saw a tourist…!” was his answer. There I was in between a lot of people on different missions. Adventurers of a modern time, those development workers. I listened to their stories about their busy lives, about how a long distance relationship did not seem possible when you change your working place every few months to go to another remote country or to a new area in crisis.

On the homepage of Germany’s Ministry for Foreign Affairs is a warning about travelling to Haiti and, during my time there, I also heard about many security rules that do not allow development workers to move around by themselves. I was as well a little bit scared. Carrying my expensive camera I saw a lot of angry faces…and my mind directly began to imagine the worst case scenario: get robed or even murdered.

But, I am a tourist who wants to see the world and after a tropical rain I took a small walk. Standing in the mud, talking with the only few French words I know with some Haitian people, I felt safe and saw a lot of friendly faces. At that moment, I recognized the 4 wheel drive Toyota of one of the development organizations, in its shiny white color – the color of virginity – driving through the same mud with surprised faces inside as they were seeing a European barefoot in the mud next to Haitian people.

Ok, often there were aggressive looks in the faces of Haitian people and I still feared an impulsive aggressive moment that would get out of control. But now I can understand a little bit better the feeling of Haitian people: living in a poor dirty country, sometimes never seeing the goods of those development organizations…only their white cars that never seem to stop on those dusty or muddy roads.

In a few weeks I will be back home, back in my clean country. I am afraid…

Michael Wagener-Marion Mauget: In Haiti I never saw a tourist… ! was his answer.

Shootdown! The Atlantique Incident and the Phantom of the Syria