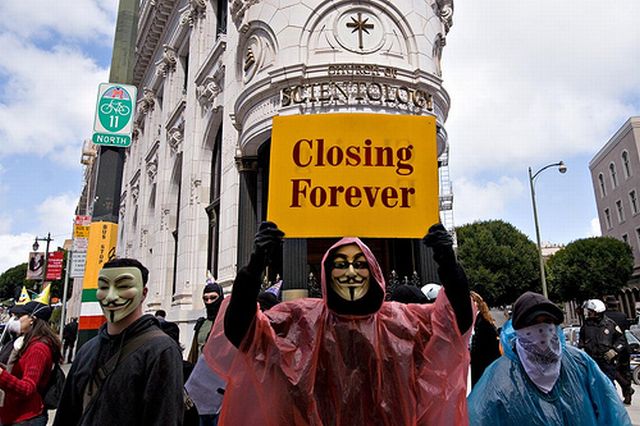 For some reason the average American is captivated by Crazy.  We love it when people cannibalize each other, act like super heroes and most especially, we love our celebrities acting batshit crazy.  Like Tom Cruise did back when he and Katy Holmes were in Love.

So it was no surprise when the media went into overdrive surveillance when those crazy love birds broke it off this month.  All sorts of speculation occurred, not the least of which regarding Tom’s sexuality which, let’s face it, has often been in question. 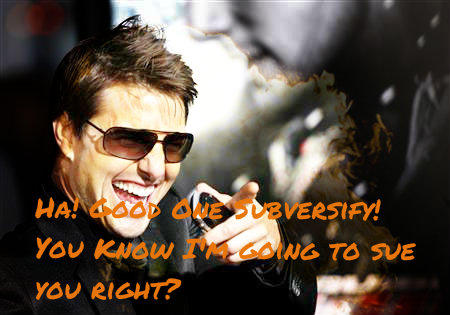 But most of the blame landed on the seemingly weird and wacky religion Tom Cruise subscribes to; Scientology.  For anyone who has been living under a rock since the 1952, Scientology is a religion based on a story made up by a frustrated science fiction writer; L.R. Hubbard.  His novels didn’t go over too well, but it turns out, when you sell your novel as a new religion, people line up to join and give you money.

What‘s most interesting are the types of people who seem to gravitate to scientology; people who are successful, moneyed and respected both in business and entertainment.  It makes one wonder just what Scientology gives back in return.

In my early 20’s I was visiting a friend in Austin, TX.  Taking a walk down by the campus, I was approached by a Scientologist outreach type person in front of their building which was big and pretty impressive. I actually mistook it for part of the campus; it looked like a library or a student center and was right across the street from campus.  I wasn’t busy that day so I sat through their “personality test.” just out of curiosity.  I was gobsmacked by what their assessor told me after filling out the bubbles, much like an exam.  It appears according to them I was incredibly selfish, a bit mean spirited and in dire need of course correction or I would end up alone after torturing everyone who came in contact with me.  This hasn’t come true as of yet, but I guess there’s still time.

The main message I got out of it all was I needed to spend a lot of money right away taking classes, watching videos and joining groups, maybe even living with other Scientologists in a community so I could learn how to do this “life” thing correctly.  It seemed to me the perfect shill.

This is why I am always amazed that people who have money and recognition and the means to be happy join this religion.  I just don’t see the positive side of it.  I was not told one positive thing about myself that day.

In the wake the breakup of Scientology’s royal couple, or at least their outreach couple, it seems a bit more of the cracks in their functioning are coming to the surface.

The organization has recently asked members to actively seek censorship of anything to do with the two stars at sites that have in their TOS a policy of not attacking religion, beliefs, personal lifestyle, etc.

The church has sent an email to followers instructing them on how to “Counter free speech on the internet.”

“The message instructs followers to visit media sites, including Microsoft, Google or any other that requires users to agree to a code of conduct that prohibits comments that threaten, defame or degrade any group or individuals.”

However this is where the breaking points are showing.  This also comes at a time when large contingents of Scientologist have separated themselves from the main body of the church citing their own growing membership and not agreeing with the body of the scientologists’ censorship message.

“The campaign also comes as an entire mission for the church has defected from under the leadership of David Miscavige, reports the Village Voice. Leader Dani Lemberger of Israel’s Dror Center, in Haifa, told Voice blogger Tony Ortega that his mission is one of the few that are still growing and announced that it is rejecting Miscavige’s leadership.”

“It is the “first time in memory” that an entire mission has announced that it is leaving the church, Ortega said.”It now plans to become a part of the burgeoning “Independent Scientology” movement.

While the leaders of the main Scientologist Church have kept their policy of not commenting on anything, others who have been breaking away are breaking their silence.

Dani Lemberger and his wife Tami founded the Dror Center in 1992 — twice, Tami has been recognized by the church as the world’s best auditor, in 2000 and 2002. The Lembergers were in the US this week to meet other members of the independence movement. The church used that opportunity to serve them in Tampa’s airport with notices that they had been “declared suppressive persons” (the church’s jargon for excommunication).

Dani Lemberger states: “Our mission is one of the few on the planet that’s actually expanding,” he told me. But now, his group has notified Miscavige that it will no longer answer to him. “We have left the church.”

Lemberger reacted to Debbie Cook’s e-mail by forwarding it to church officials, asking them to comment on it. Instead, the church’s Office of Special Affairs put him “in ethics” — under a kind of interrogation program — and asked him to read a copy of the church’s propaganda magazine, Freedom, which contained attacks on the credibility of numerous former church officials who spoke up for a 2009 Tampa Bay Times expose, including Marty Rathbun, Amy Scobee, and Tom DeVocht.

“The magazine is disgusting. It’s evil,” Lemberger says. “It has a photo of Tom DeVocht scratching his balls, like every man doesn’t do that. It had a photo of Amy Scobee that made her look bad. And the writing, it’s gross and ugly. So gross, you know they’re lying. It’s just hatred, and a Scientologist never hates.”

“As the church says, ‘Think for yourself’,” his wife Tami adds.”

So the people at his mission began reading stories about Scientology on the Internet.

“Everyone came to the same conclusion — the church is fucked. The orgs are useless. Miscavige is a lunatic,” Dani says. “We decided we wanted to leave the church.”

Blogger Mark Rathbun notes that the attempt to censor website comments is like showing up to a nuclear war with a squirt gun. He goes on to state: “When will David Miscavige (supreme leader of corporate Scientology and Tom Cruise’s best man) ever learn that attempts to suppress communication and expression only make more news than the news he attempts to censor?” 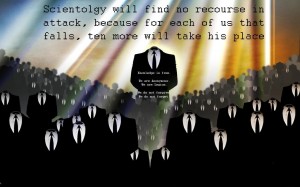 All of this should be vindicating for factions of the movement known as Anonymous.

Most people know Anonymous for their government hacking and consistent threats to shut down social network sites as well as their YouTube videos which encourage people to think for themselves as well as act out when the individual feels necessary.

What some people do not remember is that a big portion of the Anonymous movement began honing their skills due to the abuses individuals suffered from Scientologist organizations.  The “We do not Forgive, We do not forget. “ bit most likely has its origins in their attacks on Scientology.

Beginning  around 2008, Anonymous has been instrumental in bringing what they claimed was cult-like abusive practices of Scientology to light;  posting stories of abuses of minors as well as of families and other people who are of the age of consent.

“Our short-term goal is to advocate rescinding the Scientology organization’s tax exempt status, ensuring that the organization remains unable to perpetuate its history of intimidation, disconnection and other illegal or otherwise unethical activities.
While we are prepared to work towards dismantling the Church of Scientology as an organized entity, we do not attack individual Scientologists’ beliefs.”

They go on to list what they believe to be the dangers of Scientology:

“The Church of Scientology claims to be a religion and enjoys a questionable charitable tax exemption in the United States. However, former Scientologists and anti-Scientology activists have exposed many serious misdeeds by this organization and its leadership:

Many former Scientologists have in fact joined the ranks of Anonymous posting discussion boards and support groups online in which people can both talk about their experiences and plan for peaceful protests.

NYU professor Gabriella Coleman has addressed the Anonymous/Scientology connection in her course presentations.  Coleman had a member of Anonymous come speak in her class, who talked about going from ultra-coordinated internet motherfuckery to confrontation with the church, including “Faxing my bare ass to them.”

Anonymous had real consequence on Scientology. “It pierced the media,” says Coleman,
“People were more willing to be critical to the church post anonymous.” This included Coleman herself, who had studied Scientology for years but never felt free to come forward with her research. She talked about parallels between Anonymous/4chan and the trickster archetype in mythology, the trickster often not being a very clean and savory character, but perhaps vital for social renewal.

It seems renewal, or at the very least change is on its way.  In many countries outside of the U.S. Scientology is not considered a religion and as such can be subject to the same scrutiny as any business.  In Italy during a raid on a Scientology centre in Turin, many illegal documents filled with personal information of government officials, journalists and others considered threats to the organization were found and confiscated.  The center itself is now facing criminal charges.

Reflecting on this wind of change brought about in part through peaceful protest and information campaigns, it seems to me that in many cases people can have a lot of power.   It has taken over four years for Anonymous to bring down Scientology and the cracks are only just beginning.

Maybe this situation seems bad for regular, everyday Scientologists.  I’m sure there are good people mixed in there, there usually are.  But, perhaps it’s good for all of us.  Perhaps it’s time for transparency in all groups that call themselves religions.

Grainne Rhuad- Anonymous and Scientology share a history of being at odds, but just now it seems that Anonymous is winning.