The Time Is Now: Zombie Apocalypse Has Begun!

Back again is Subversify’s pre-teen correspondent to fill us in on what is hot and trending with the almost jr. high subversives.  This week it’s Zombies. 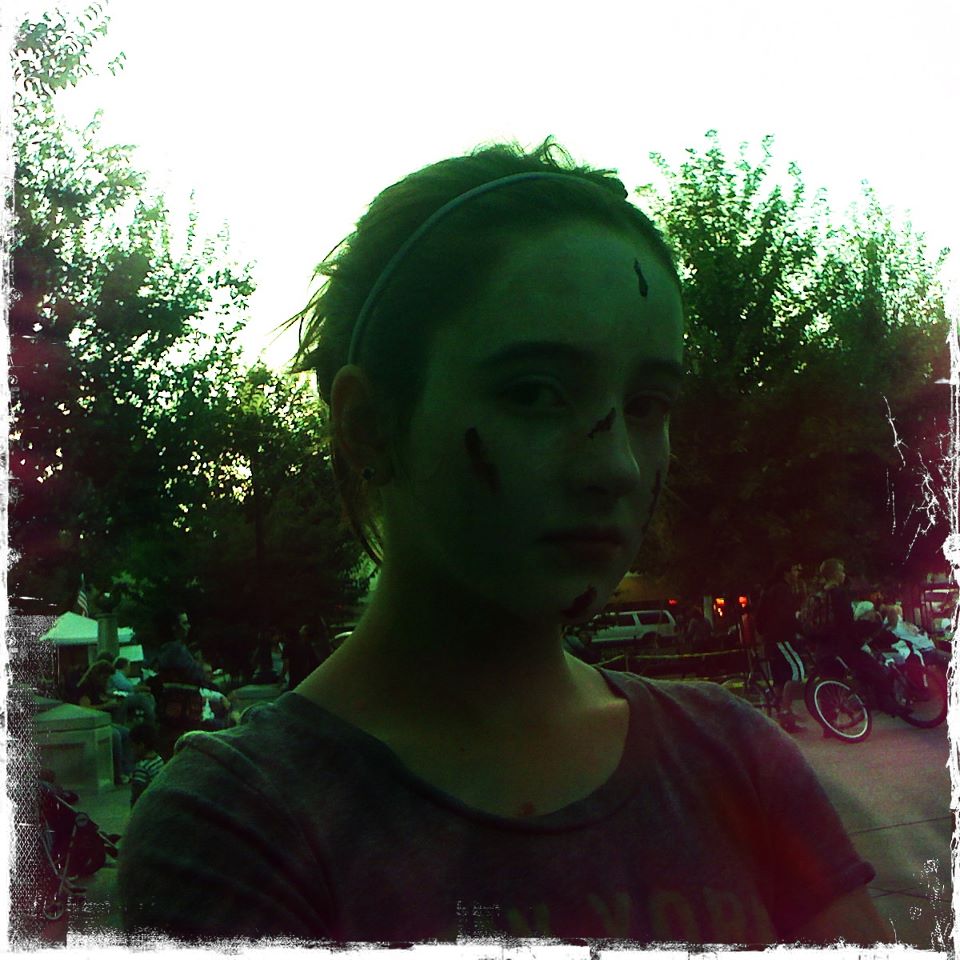 Beginning in May, on a sunny day in Miami, Florida, America began living its very own Zombie fantasy.   As you know, there are thousands of homeless people in the world. Well 65 year old Ronald Poppo, who was one of these unfortunates, was walking in an alley of down town Miami, when 31 year old Rudy Eugene decided he looked delicious. Eugene was found naked under a bridge, chewing on Poppo’s face. The Miami police yelled at Eugene to stop, but he wouldn’t and for Poppo’s safety, the police shot at Eugene. They shot at him in the chest several times but he was still alive, after shooting him even more, Eugene dropped to the ground dead. Poppo is now in a hospital in Miami. He is doing fine and is to have physical therapy.

Yes, there are finally Zombies in North America and who knows if they are in any other part of the world. There is nothing we can do about it. Let’s face it; we all know that this country is all pretty screwed up. There are some crazy people in the country.

People are starting to say that the Zombie apocalypse is almost here. When I was younger, my mother joked around about the zombie apocalypse. I got really scared. Little did know that I was going to write an article about Zombies. People are freaking out about this when you are actually pretty safe. There is a 0.25 in a 10 percent chance that you would be a Zombie victim. But just in case, you should be ready for the Zombies next attack.

Look, everyone knows that the Zombies are coming and there is nothing we can do about it. Just be prepared. This is the updated list of the do’s and don’ts, and how to tell if Zombies are in your town.

How do you know there are zombies in your town?

Well, if you start hearing crazy people chanting to themselves, then yeah they are on the verge on Zombie-hood (or they are in a popular teen cult…either way, probably bad news). We all know that the crazy people are going to become zombies first because they were neglected and left to live on the streets. You can also tell there are Zombies in the town when you hear screaming and police cars all night long. And the final way to see if there are Zombies in your town is if you see a lot of new (but empty) graves. That means one of three things:

A- The Zombies have been crawling out of their graves.

B- There have been a lot of deaths, which means that they died from Zombies eating them.

How do you prepare for a Zombie apocalypse?

When picking your weapons, you want to get something that you can shoot or throw or stab them with from a long distance because you don’t want to get the Zombie juice on you. The main weapon that you want is a gun. When you get a gun, your first choice is a hand gun. Hand guns can hold more bullets and you can empty and re-lode fast. They are easy for travel and you can put them almost anywhere.  You want to make sure that you have more than one gun because the gun can get lost or broken. If you can’t get the gun, then you want a machete. Go ahead and cut off their heads. Make sure that you don’t get the Zombie juice in your blood through a cut or something…it will turn you into a Zombie. You can use pretty much anything, just kill the brain. Cut off the head then smash it. If you want you can burn it. Just don’t let any other Zombie eat the body because then the Zombie will get stronger.

After you get your weapons, you want to get a safe spot. I would say a basement because Zombies can’t lift heavy things or their limbs will fall off. Or you’re going to want to hide in an attic. You want to be as far away from a graveyard as possible. Try getting a cabin in the middle of the woods. Make sure that you have food storage because you don’t know how long you will be there.

How you know you got infected and what to do.

If you got any Zombie juice on you, and you didn’t disinfect it by burning the area you are probably on your way to being a Zombie. If it gets into your blood then kill yourself if you don’t what to become a Zombie. If you decide to kill yourself then you should knock yourself out and have someone throw you in a fire so you know that you won’t become a Zombie.  If the Zombie juice gets in your system without you knowing the symptoms of Zombieitis, you’re going to want to go through this check list:

If you said yes to any of these, you may want to kill yourself.

But you never know when they are going to crawl out of their grave…OH WAIT THEY HAVE!

Y’all had  better stop reading and start killing the Zombies

For more fiction from the mind of Lauryn Grace visit her blog @ http://www.lauryngrace-book.blogspot.com/

Lauryn Grace- Are you prepared for the Zombie Apocalypse?