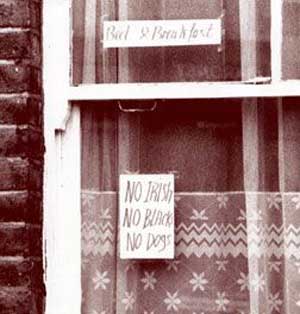 In a recent post entitled ‘Riots – Old and New…..26 April, 2012’ I tried to compare the modern policing of public disorder in the UK with that of forty years ago when I was a young uniformed Constable in London. There were many major issues facing various countries worldwide at the time and especially we young officers held firm views on all aspects of them. The Viet Nam War, Apartheid, Racism, Civil Rights and other similar issues of the time were subjects of concern held dear to me and the majority of my colleagues.

When I read some of the comments on the post I mention I was in the first instant quite shocked at the name calling, the disgust some people felt towards police in general but having read those same comments a second and third time I realised that the views held by those making them were, I believe, honestly held. I began to ask myself the question ‘Why?’………………

In order to try and make some sense of it all, I will start with ‘Racism’………….

In the 1950’s Britain began to recruit black people from the Caribbean with promises of wealth, health and happiness. The thousands who arrived to take up employment as nurses, doctors and especially bus drivers/conductors soon found that they were not welcome in many of the large cities. The Irish labourers who had always come to the UK for employment knew only too well how the West Indians felt for they had been the targets of brutal racism for many, many years previously. Hence the sign on many boarding houses: ‘Rooms to Let: No Irish, no Blacks, no Dogs’. Such racist signs were not against any law at the time.

When I married in 1967 my Indian wife and I were searching for somewhere to live pending the allocation of police married quarters. When you have had a bucket of water thrown at you when enquiring about a ‘flat to let’, you soon become only too aware of Racism in its most basic form.

At about the same time in the US, the Civil Rights Movement was now well advanced and when Rosa Parks – probably my greatest American Heroine – had earlier stood up to authority by refusing to give up her bus seat to a white man, there were signs on the horizon that things could only get worse.

Black Olympic athletes who came to Europe were treated like heroes yet when they returned to the US they were refused entry into a ‘whites only’ restaurant. Singers who were treated like royalty over this side of the pond again faced a similar situation on their return. I and many other young officers were only too aware of the blatant racism in especially the Southern States of America. It was a shameful episode in that country’s history. Over here it was quite bad but certainly not even close to that of the US.

The Rugby and Cricket world was shocked when Basil D’Olivera a South African born cricketer deemed by the authorities there as ‘coloured’ came to the UK and was after his residency had been established chosen to play for the English team against South Africa in South Africa. He was refused entry there and the Test match was cancelled. However, when a New Zealand rugby team selected two Maoris to play for them against South Africa, the government at last relented and they were allowed to enter and play. Again, we were fully aware of such things.

When the South African Rugby Team came to the UK at the time to play a series of matches, a determined effort was made by sections of the public to disrupt the games in the hope that it would be cancelled. Once again we policed the ‘demonstrations’.

It was at one such game at Twickenham that I witnessed a change in police tactics which upset and in fact disgusted many of my colleagues. A group of officers had been formed entitled ‘Special Patrol Group’. They were not liked by us ‘ordinary’ officers and they came a close second to the Traffic Patrol Officers whom we knew as the ‘Gestapo’.

Up to the point when the Special Patrol Group became involved, we had quite a relaxed tour of duty at each match. We were in fact on first name terms with many of the demonstrators who were school teachers, office workers and genuinely nice people. It was their aim during the course of the match to climb the barrier and run onto the field. We on the other side of the fence would catch them and run with them to the nearest exit and eject them. In fact it was all a friendly, cosy time with no force used or in fact necessary on either side.

On one occasion, a teacher whom I had got to know told me that he intended to climb the fence and make a protest. I remember telling him ‘to make it look good’ for the benefit of the watching senior officers in the upper stand. After a little pushing and pulling I took his arm and we began to run around the edge of the field to an exit. Suddenly he said to me “Paddy, your watch is falling off your wrist”. I looked down and saw that the strap had become undone. It is fact and the truth that I let go of his arm, took my watch and placed it in my pocket whilst he stood beside me. He then unbelievably gave me his arm back and we continued to the exit.

This type of policing continued for two or three matches until a different element joined in the demonstrations. I do not know what the aim of this group was but it was definitely potentially more dangerous than the other protests. They began to throw bags of nails onto the pitch. They threw light bulbs, bottles and coins whenever a player came near to them. They then developed a tactic whereby part of the group would bend down at the fence whilst the others would run, jump onto their backs and leap the fence.

It was at this stage that the Special Patrol Group began their ‘new’ tactic. Whenever someone tried to clear the fence they made an upward motion with their open gloved hand striking the demonstrator under the nose. This caused in most cases a severe nose-bleed. We, the ‘ordinary’ officers stood there in shock at the sight of dozens of bloody faces.

It was at this stage of my police career that ‘things began to change’. At another ‘riot’ in South London I watched on TV with mixed humour at a group of officers with large shields being the target of dozens of young black youths throwing rocks and bricks at them. At the same time, a group of ‘ordinary’ uniformed officers were standing not too far away in relative safety.

It appeared that the element of the Londoner’s attitude towards ‘fairness’ came into play. The officers with the shields had some protection so they were ‘fair game’ whilst it would have been totally ‘unfair’ to attack the others.

This is an element of the ‘big difference’ between modern and ‘old’ forms of public disorder. The element of ‘fairness’ – on both sides seems to have got lost in the mists of time with everyone, men, women and children, black or white, ‘ordinary’ officers, ambulance personnel, fire officers and anyone else I failed to mention, being the targets of petrol bombers, arsonists, thieves, muggers and sadly, murderers.

It is also easy to understand the officers policing such vicious riots as occurred in August last year. When you have been petrol bombed and stoned for hours on end when trying to protect ordinary people’s lives and property it must be very hard to say ‘Please Sir, please stop’. When you have seen some of your colleagues seriously injured self-preservation becomes the order of the day.

Modern policing requires that officers be trained for every circumstance including riot situations. However, in London there is no ‘Riot Squad’. No ‘rubber bullets’ have ever been fired on the mainland unlike Ulster. There are no ‘water cannons’. The officers who are trained in ‘Riot Control’ are the same officers who the following day, sit in children’s classrooms giving talks on safety. They are often found visiting some Senior Citizens lunch to give a talk on burglary. I could go on but I will just add that they are ‘ordinary’ men and woman who have their own beliefs and fears. They are not brainwashed automatons.

Finally, bearing in mind that I retired from the service fifteen years ago and have never been involved in a ‘modern’ riot, I can say that I have never done anything during my thirty-one years service of which I am ashamed. I did however do a lot of good during those years and am fiercely proud of my honestly and integrity.

How many of those who had the cheek to call me a ‘fascist’ can say the same thing?

Mike: We, the ‘ordinary’ officers stood there in shock at the sight of dozens of bloody faces.