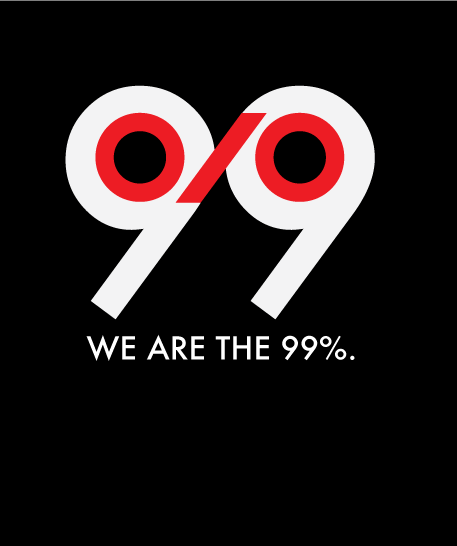 You hear it all of the time. “We ARE the ninety-nine percent!” At least in Los Angeles you do. It’s written all over billboards, scrawled on walls, depicted on stickers stuck to lamp posts. It’s everywhere! But has anyone figured out exactly who qualifies as the 99%?

Most people who back the Occupy Movement seem to have a grasp of who the 99% are and what that means; but in case some are confused, let’s go over this.

99% of the Occupy Movement gets it. They know we are all in this together and as a movement they are, for the most part, a very peaceful movement.

The rock behind this movement lies in the stories of people. The stories of struggling as 1% of society uses policy to enrich themselves, avoid paying their fair share of taxes, dictate civil and human rights, and practices corrupt banking and business practices to bilk the rest of us.

“I am 20K in debt and am paying out of pocket for my current tuition while I start paying back loans with two part time jobs.”

“Married mother of 3. Lost my job in 2009. My family lost our health insurance, our savings, our home, and our good credit. After 16 months, I found a job — with a 90 mile commute and a 25 percent pay cut. After gas, tolls, daycare, and the cost of health insurance, I was paying so my kids had access to health care.” 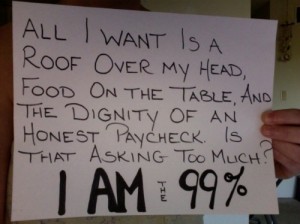 I am young. I am educated and hard working. I am not able to pay my bills. I am afraid of what the future holds.”

“I am a 19 year old student with 18 credit hours and 2 part time jobs. I am over 4000 dollars in debt but my paychecks are just enough to get me to school and back. next year my plan was to attend a 4 year college and get my bfa, but now I am afraid that without a co-signer I will have no shot at a loan and even if I can get a loan I am afraid that I will leave college with no future and a crippling debt.”

“I went to graduate school believing that there might be some financial security afforded by a higher degree, and that with that security I could finally buy my mom her own house and take care of her. Instead, I have wasted six years of my life.”

“I am a 27 year old with a bachelor degree. I ran out of my student loans while trying to find a job. I am ‘living’ with my mother again to get back on my feet. So far, the best I can do is a part time retail job paying $8 an hour. I am hearing impaired with cochlear implant. My cochlear implant warranty expired. I do not have the money to renew it. How can I work at my new minimum wage job when my implant is broken? I need it to HEAR.”

So, does this include workers in all jobs? For instance, are the police officers of this nation part of the 99% too? 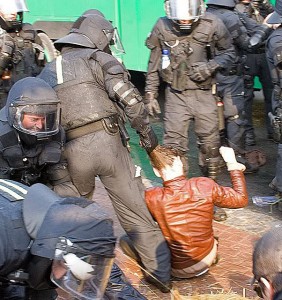 Let’s examine police behavior. It’s a shame that so many officers in cities like Los Angeles condone illegal violent and excessive force against citizens. Because this creates a feeling of disgust among the very people they need to back them up when they are attempting to defend these people during crowd control.

But in many cities, police forces have well-earned reputations for using their authority inappropriately.

I know this for a fact, because of my dealings with the Long Beach Police Department and one of its officers who used excessive force on me in 2009.

No matter how many bruises I had; or, how many photos they took while investigating the attack on me by one of their “finest;” in the end the LBPD investigated themselves and determined that beating the crap out of a 55-year old woman trying to get on the ground after being ordered to do so, was justifiable. Even though a camera showed I complied with the officer’s command, the police officer created a story, a lie, a bunch of b.s. that he had reason to leave bruises up and down my arms and legs, breaking my finger and toenails by leaping on me and sending me crashing to the pavement. Even though at 55 I was not so nimble, I was trying my best to get on the ground in my not-so-limber way.

And in spite of the fact that they dropped the charges against me when they realized how ridiculous they were and that they had arrested a member of the neighborhood watch committee — a woman who had no arrest record in a lifetime of over fifty years, and who had film evidence that the cop was lying, they still found the abusive jerk innocent for abusing me.

During my incident, I had a female jailer named Hernandez at the Long Beach Jail tell me should would “fuck me up if I didn’t shut up” when I asked a simple question. Yeah…SHE was a real class act, like so many there. I was threatened many times during that weekend I was held. Why? Because I was pressing excessive force charges against an officer. I was even told I’d “never make my way to court,” by some of the most gutless minority jailers there, who used their authority and the power of many against one to try to intimidate me.

Certainly, the case of Perry Grays, who was brutalized by Long Beach police on Super Bowl Sunday 2011, duplicates a bit of what I went through. I wasn’t tased; but the elements of this case and mine are similar. In the following interview, Mr. Grays tells a familiar story to many arrested needlessly in places like Long Beach: 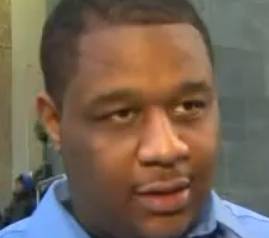 “Can I get your badge number,” and he says, “No, I’m not giving you anything,” and I said, “Isn’t it illegal to deny me your badge number?” and he says, “I’m not giving you anything.”
So then his partner asked, “What is your name?” and I said, “Sir, I didn’t come down here to give you my name, I came down here to get your partner’s badge number and he’s being unprofessional.” So he asks my friend what’s his name and my friend says, “Sir I don’t even live here”. So the officer who hit my window with the flashlight pulls out his taser and I said, “Okay, are you going to tase me?” He says, “Are you going to give me a reason to?” I said, “No, I didn’t say that, you’re putting words in my mouth” and he says, “Well you’re putting words in my mouth”.

I know the following paragraph is identical! I was arrested for resisting arrest and being drunk in public, no matter that I was behind a gate in my own yard and had barely taken a sip of a Mojito while barbecuing with friends, when the incident happened. Fortunately, a camera recorded the entire event and proved my point. But this man’s experience mirrors mine in many ways:

And they charged me with threatening a police officer, resisting arrest, and having a loud party. They released me after two days. I guess the charges were dropped because after their investigation they couldn’t prove any of those things, so they let me go.

So I understand very well that there are cops out there who should be held accountable for using excessive force. I’ve heard the stories of inmates in Los Angeles County Jail being told to, “turn and face the wall and don’t look, or they would get some too” as a team of jailers beat the crap out of some guy arrested for something like fighting a police officer.

Los Angeles police arrested a man they say hit a female officer on the head with a snare drum during May Day protests.

He walked behind the policewoman on a skirmish line and out of the blue, struck her in the back of the head with a drum, nearly knocking off her helmet. She was treated for a minor concussion.

Police say 6’1″ 280 pound Brian Mendoza of Los Angeles was arrested Wednesday on suspicion of assault on a peace officer who stood about 5’1″ and weighed about 100 pounds. He remains jailed Thursday without bail.

Look, I don’t believe in all of the rash of security officers that have been hired by Homeland Security to protect us against ourselves:

And if anyone has a reason to hate police, then, it would be me after dealing with the corruption of San Diego’s Homeland Security agents at the border and in Correction Corporation of America’s Immigration Detention Center in Otay and the Long Beach Police Department. I saw firsthand how unscrupulous people can be during my dealings with them. 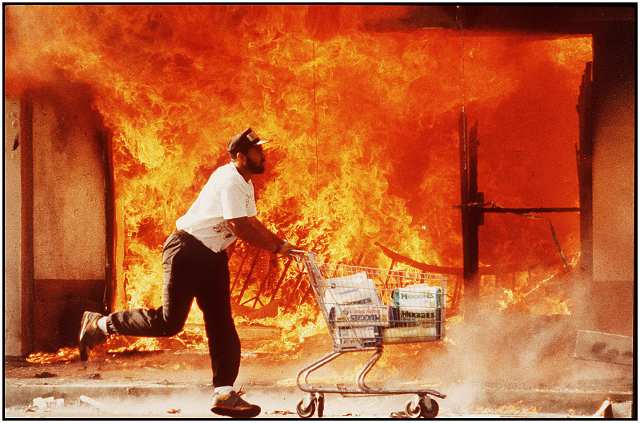 But part of me also wonders if in placing this, me-against-them attitude against police simply maintaining crowd control at an event like the Mayday demonstrations isn’t taking this 99% thing to an extreme.

Why do we need to brutalize a person who is simply doing their job? Are we claiming after the L.A. riots 20 years ago that we don’t need police? If so, I disagree. And as a person who was a victim of police brutality, I’ll also be the first to admit that I believe there are good police officers out there. They are family men and women and they work hard. To me, they deserve respect, just like any other hard working employee.

After all, don’t these people worry about their mortgages too? Don’t police officers have kids struggling to attend school? What financial stories can they tell that might classify them as part of the 99% too?

And realizing this, why do we allow protesters to assault the police when they aren’t doing anything but maintaining crowd control.

I will be the first to admit that I have a hard time stomaching police when they overstep their boundaries. Simply, I think it takes a great deal more strength to be a cop who respects their community, than a spineless wimp who abuses it.

And I won’t lie and say that when I hear stories (like yesterday) of ICE agents being murdered by anyone, including their own sons, that I have much compassion. I don’t.

Simply, after knowing how corrupt they are and how so many of them treat others, I can’t affect a caring attitude about something horrible happening to them.

But with all of that said, I still view them as part of the 99%. Not the part I want to associate with; but part of the problems we all suffer. And because of that, as much as I hate them, I don’t feel they should be needlessly assaulted during protests. I would hope others would agree.

Jennifer Lawson-Zepeda- Why do we need to brutalize a person who is simply doing their job? Are we claiming after the L.A. riots 20 years ago that we don’t need police?