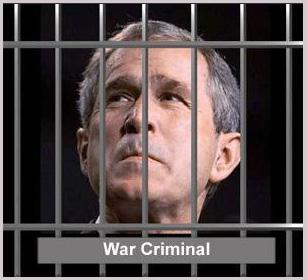 I kept saying it!  That the torture the U.S. sanctioned against people held in Guantanamo Bay would come back to haunt us.  And it finally has!

Thank GOD, there are still ethical people left in this world!

“In what is the first ever conviction of its kind anywhere in the world, the former US President and seven key members of his administration were yesterday (Fri) found guilty of war crimes.”

“The trial held in Kuala Lumpur heard harrowing witness accounts from victims of torture who suffered at the hands of US soldiers and contractors in Iraq and Afghanistan.”

“They included testimony from British man Moazzam Begg, an ex-Guantanamo detainee and Iraqi woman Jameelah Abbas Hameedi who was tortured in the notorious Abu Ghraib prison.”

“At the end of the week-long hearing, the five-panel tribunal unanimously delivered guilty verdicts against Bush, Cheney, Rumsfeld and their key legal advisors who were all convicted as war criminals for torture and cruel, inhumane and degrading treatment.”

It had to happen!  Torture is something that the U.S. has customarily taken a strong stance against; so to use it as an effective method of eliciting information?  Deplorable!

But the huge question is, What happens now?

“Full transcripts of the charges, witness statements and other relevant material will now be sent to the Chief Prosecutor of the International Criminal Court, as well as the United Nations and the Security Council.”

“The Kuala Lumpur War Crimes Commission is also asking that the names of Bush, Cheney, Rumsfeld, Gonzales, Yoo, Bybee, Addington and Haynes be entered and included in the Commission’s Register of War Criminals for public record.”

Obama Where are You

That’s a start; but what about the International Criminal Tribunal demanding warrants for their arrest?  Shouldn’t that follow?

So, my next question is this…

Why isn’t President Obama putting on his big boy pants and demanding their arrest?  After all, the U.S. has been BIG on hunting down other war criminals and ensuring they were prosecuted; so, why not now?

WASHINGTON, April 26, 2012 /PRNewswire-USNewswire/ — A UN-backed tribunal Thursday convicted former Liberian president Charles Taylor of aiding and abetting war crimes and crimes against humanity – the first time a head of state has been convicted by an international court since the Nazi trials at Nuremberg. Sen. Patrick Leahy (D-Vt.) worked closely with successive prosecutors at the Special Court for Sierra Leone in making today’s breakthrough possible. Leahy, as chairman of the Senate Appropriations Committee’s Subcommittee on the State Department and Foreign Operations, wrote U.S. laws to withhold aid to any government that harbored Taylor, to increase the reward for Taylor’s capture, and to provide crucial funding for the court, even when it was not requested by an earlier administration. Leahy has long led as well in seeking justice for war criminals and in securing resources to help their victims. The court found that Taylor also personally profited from his crimes, receiving “blood diamonds” during the conflicts involving Liberia and Sierra Leone. Leahy heralded the roles of former Rep. Tony Hall (D-Ohio), joined by Sen. Dick Durbin (D-Ill.) and others, who led efforts in Congress to stigmatize the role of that illicit diamond trade, which paved the way for the Kimberley Process, a joint effort by governments, industry and civil society to stem the role of diamonds in conflict zones.

(Source:  Leahy: Taylor Conviction Shows That The World Can Hunt Down War Criminals And Bring Them To Justice)

Why aren’t people like the self admitted torturer, ‘Hard Measures‘ author and former CIA official, Jose Rodriguez also declared as war criminals?  We’ve allowed him to profit off of his campaign of torture by publishing a book?

In the Bernie Farber’s blog, War Criminals — At Any Age — Should Be Punished, he admits that the common assumption is that war criminals evade prosecution because of many excuses.  One that remains is that many believe that given the age of the perpetrators and that the murderous brutalities occurred more than 65 years ago, we best just move on.

So, will we adopt this attitude towards our own war criminals of Bush et al?

If so, shame on us for being also the worlds biggest hypocrites!

Jennifer Lawson-Zepeda: Why isn’t President Obama putting on his big boy pants and demanding their arrest?