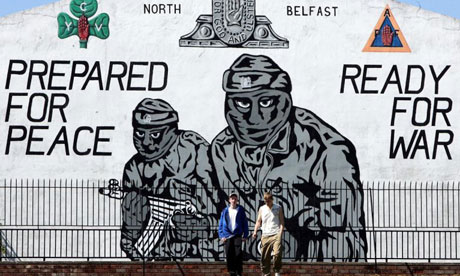 Last Easter weekend was the ninety-sixth anniversary of the Uprising in Dublin that without doubt paved the way for the formation of the Irish Republic. Although there are still die-hard so-called republicans in the form of dissidents in the remaining Six Counties of Ulster, I have no doubt whatsoever that within the next ten years or so, the entire country will be totally reunited. I will be happy in a sense, yet sad that it will have taken over four hundred years to achieve it and the loss of the hundreds of thousands of lives it has cost in the process. I am, and have always been, totally against violence to achieve such a status and believe that the Good Friday Agreement of 1998 made it possible by peaceful means.

The visit of HM Queen Elizabeth Second to Ireland in May last year made everything possible. It was in fact, her earlier namesake, Elizabeth First who basically started all the bitterness and bloodshed that has plagued the island for centuries.

When Elizabeth First assumed the throne in November 1558 on the death of her father Henry the Eight, she was Queen of England and all Ireland. At her instigation, the English controlled Irish Parliament in Dublin passed an Act of Supremacy confirming the Queen as head of the Irish Church. This was a Protestant denomination whilst the majority of Irish were Catholics. The act required all holders of offices of state or church to swear allegiance to her.

The English had tried several times to fully extend their jurisdiction outside Dublin but had failed several times. They had built a ‘Pale’ from north of Dublin, west into the midlands and south towards county Wicklow. Within this area the English dominated all aspects of life with the majority of inhabitants loyal to the Crown. Outside, Irish life as in the past continued under the control of various chieftains. Elizabeth ordered that her authority be fully extended to cover all Ireland.

Her attempts were to initiate The Nine Year’s War…

Two of the highest ranking Irishmen of the time were Hugh O’Neill, Earl of Tyrone and chief of the O’Neill clan and Hugh (Red Hugh) O’Donnell, Earl of Tyrconnel (now Donegal). They were fiercely Irish and maintained the Gaelic way of life, its laws, language and customs within their territories. The title of ‘Earl’ had been granted by the Crown to the head of the clan O’Neill and was held by Hugh’s grandfather. After a bloody battle with a relative he secured the title in 1595. The title was not the important factor in the clan. The title ‘The O’Neill’, the Irish version for leadership was what he wanted.

In 1587, at the age of fifteen, O’Donnell was arrested in an attempt to break the allegiance between the O’Neill and O’Donnell clans. He was imprisoned in Dublin Castle. He escaped briefly in 1591 but was recaptured within days. In January 1592 with the help of O’Neill he again escaped accompanied by his brother Art O’Neill. It is the only successful escape from the Castle during its long history.

They made their way across the Dublin and Wicklow mountains in the freezing snow and rain. Art died with another escapee suffering from frostbite and exposure. After receiving hospitality and medical aid from an ally they returned to their home counties in Ulster.

They organized the Irish chieftains and began a long running campaign against the English armies. Between 1600 and 1601 the English had eighteen thousand soldiers in Ireland. This was one of the largest armies ever mustered by the English at that time and it was putting a strain on the English Treasury.

O’Donnell had clan connections with Scotland and through his contacts; he enlisted Scottish mercenaries known as Redshanks. O’Neill on the other hand, as an Earl was entitled to hold a small army. By rotating the members of it he had literally thousands of trained men at his disposal. He purchased muskets and pikes from Scotland and England and enlisted the promise of help from Philip Second of Spain. This was an allegiance of Catholics against the threat of Elizabeth’s Protestantism. As a result, the army of O’Neill came to eight thousand men.

The Irish were very adept at skirmishes against the English army. Whilst they floundered in the bogs, the lightly armed Irish attacked them from all sides. The Irish were also familiar with their surroundings and weather conditions. The English were not and a great many died. In order for the English army to enter Ulster – the O’Neill stronghold – it was necessary for them to pass through mountains which the Irish were able to guard and prevent any movement by the English.

As a result of their static existence on many occasions the English suffered from cholera and dysentery. Again the army was dissipated.

In 1599, Robert Devereaux, 2nd Earl of Essex arrived in Ireland with an army of 17,000 men. He decided to enforce English rule on the southern provinces of Leinster and Munster – leaving the territories of O’Neill and O’Donnell until later. When later he made his way towards Ulster he met with disaster when thousands of his troops were killed. Others who took refuge in garrisons quickly contacted typhoid and dysentery and more died.

Essex signed a treaty with O’Neill which was not agreed by Elizabeth and in order to brief her, and the fact that he expected to be recalled, he returned to London. He was charged with acting without the Queens permission and was executed.

Meanwhile back in Ireland, the Irish were inflicting innumerable casualties on the English Army. However, an English army under George Carew in 1600 killed 1,200 Irish and took the surrender of over 10,000 more.

In Ulster, the province had been entered by the English army at Derry. They had employed a ‘new’ tactic whereby the countryside was laid bare by burning all crops and killing the inhabitants. They believed that without help or food the Irish would be forced to surrender.

In 1601 news was received by O’Neill in Ulster that the long awaited help from Spain had arrived with 4,000 troops. However it could not have landed any further away than it did. It arrived in Kinsale, County Cork where they were immediately prevented from moving north by the English. O’Neill gathered his armies and the long march south began. They expected to trap the English between themselves and the Spanish.

Against advice, O’Neill ordered an attack on the English but as they formed up, the English in fact attacked O’Neill’s army with a cavalry charge. The Irish were routed whilst the Spanish surrendered. The remnants of the Irish army began the long march back to Ulster. They were totally defeated in all areas of the south.

O’Donnell left for Spain and pleaded with Philip for another invasion. However, in 1602 he died there. It was believed that he was poisoned by an English agent. His brother took over leadership of the clan O’Donnell but he and O’Neill were now reduced to random guerrilla tactics. The scorched earth policy and the killing of local inhabitants by the English were having a disastrous effect on the Irish army.

O’Donnell surrendered with good terms 1602 and was allowed to keep his lands under the direction of the Crown. O’Neill held on a little longer until on 30th March 1603 he too surrendered on good terms. Elizabeth had died the week previous on 24th March.

James First became King of England and the two Irish leaders were on good terms with him. He granted them full pardons and the return of all their land and property. The proviso was in each case that they abandon all titles, disband their private armies and swear loyalty only to the Crown of England. A similar amnesty was granted to all rebels throughout Ireland.

It may seem generous of the English but in fact it was purely a commercial transaction. They were almost bankrupt with the English unwilling to provide any more funds for a continued war.

The death toll of the Irish has now been revised to an almost certain 100,000 with at least 30,000 English soldiers dead in Ireland. Most of them died from disease.

A form of peace prevailed until in 1607, both chieftains – O’Neill and O’Donnell – gathered their clans and families together and exiled themselves to Europe. They hoped that they would one day return and reclaim not only their own lands but the entire island of Ireland.

This was known as ‘The Flight of the Earls’ or by the Irish, ‘The Wild Geese’. Many of those who left Ireland became famous in Continental armies reaching the highest ranks. Since then, Irishmen have throughout the centuries left to join foreign armies all over the world. I suppose really that it could even refer to my own family with my father having served in the Royal Air Force, followed there by my eldest brother, another in the British Army and my good self to the London Police.

In 1608 O’Neill’s and O’Donnell’s lands were confiscated by the English. The land was offered to Scottish, English and Welsh people thereby beginning the Plantation of Ulster.

So there you have it: Ulster (Northern Ireland) from being one of the most Gaelic, Catholic Provinces of Ireland is now the opposite. It is the six counties of the eight in Ulster that remain in the United Kingdom that have caused all the trouble over the years. Men, women and children have died on both sides of the divide for the ‘cause’ – one side to remain in the UK whilst the other for a united Ireland.

The strangest thing of all is that there are no border posts now on account of the European Union. The only way I knew that I had left the Republic and entered Northern Ireland was when I saw that the telephone boxes had changed colour from Green to Red. The truth is that you can spend Sterling on either side of the ‘border’, or Euros, or dollars, or …You see – money talks…

Mike- A brief history of The Troubles in Ireland