The Aftermath of Mayday 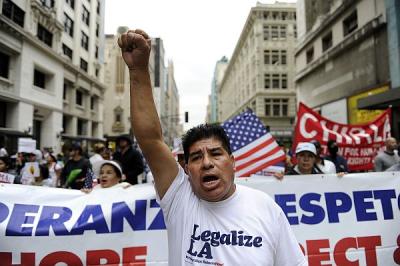 May 1st, if you lived in the financial district of Los Angles; or anywhere near it, you couldn’t help but hear the demonstrations going on. I happen to enjoy these things; so I already knew I would participate.

They Marched and Spoke

And yes, it was a wonderful feeling to see them all supporting the very things I write about and have supported for so long.

But, I couldn’t help but feel that it was only just one day.

And that all of the ideas they spoke about were great, if only people would maintain that thought all year long. But would they? I wasn’t confident about that.

I was asked by two men why I was there. I answered that I was there for probably the same reason as everyone else. But one young man made it more personal.

So I told him my personal story and he made sort of a usual statement...”You should talk to the press. They love stories like yours.”

I had to correct him. In reality, the press could care less about stories like mine. When all of this happened to me, I was certain that if only the right reporter heard about the injustice, they’d run with the story. I realized, quickly, that this was far from the truth.

But even while I sat at Pershing Square and listened to all of the music and speeches; I couldn’t help but wonder about the aftermath of May Day.

And I’m not talking about simply marching in the streets, as the Occupy LA Movement does every Friday night, blocking traffic, and carrying tents, as they shout, “Whose streets, our streets!”

I’m talking about action in the voting booths, active participation in boycotting corporations exploiting employees, living our lives in a manner that tells the 1% that we aren’t lying down and accepting what they’ve planned for us; but instead, we are actively going to ensure that living our lives with quality matters too.

We’ve proven that boycotts work. Remember the boycotts of Bank of America and how that changed their policy? Why not implement this into a method of change? For instance, can we start a site aimed at:

Why not provide a list of companies and their behavior, the same way they look upon us for our reputations? Do I really need financial services from a company who asks for Facebook passwords during the hiring process?

Yesterday was supposed to be the day of the worker. So why aren’t workers bringing back unions to solidify fair employment contracts?

If the excuse is that we removed unions to keep our jobs, then aren’t we living in denial?

Those jobs went overseas right after the unions were removed!

We have the ability. But will we do what’s needed?

Jennifer Lawson-Zepeda- Even while I sat at Pershing Square and listened to all of the music and speeches; I couldn’t help but wonder about the aftermath of May Day.