Roseanne Barr for President: Fast times at the Victoria Theater 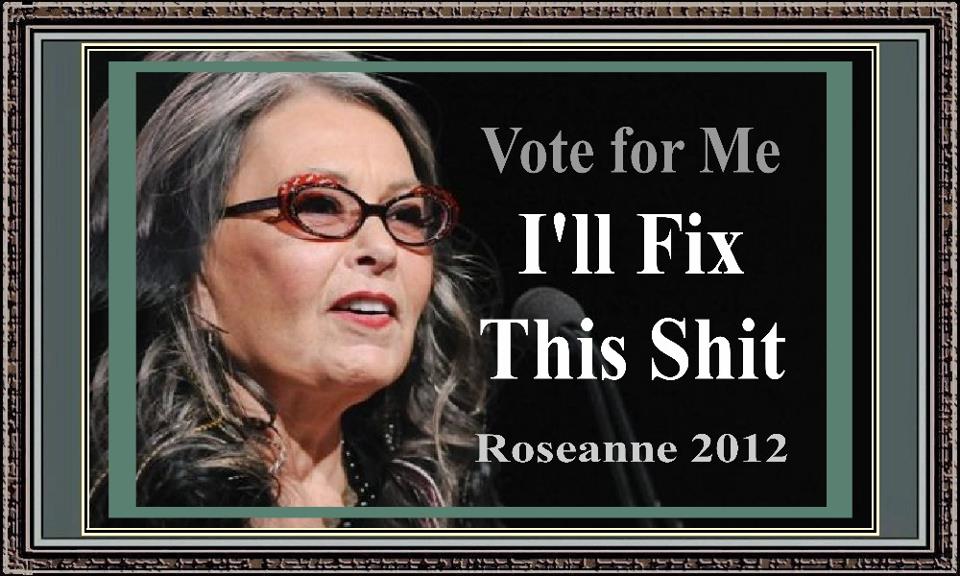 Both Stein and Barr clearly supported single-payer healthcare — and this is a good thing for everyone over age 35 because, under America’s current healthcare system which only seems to benefit insurance companies and Congressmen, older employees are less likely to be hired because potential employers know that they will probably have to pay for more healthcare benefits to us old guys because we are more likely to get sick.

However, there is a far more important reason for voting in a Green president this year other than just to assuage healthcare and unemployment fears. The Green Party is also offering us a much better overall cultural myth to live by than the same old tired and ineffective cultural myth being forced down our throats by DemoPublican hacks. 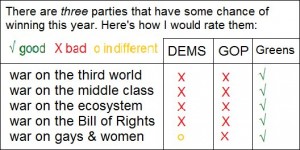 According to economist Howard Richards, cultural myths perform the highly-important function of designing and fueling our society — and the most crucial myth currently holding our big blue marble together is this: Accumulating excessive amounts of individual profit is the best thing we can do, creating more profit than we can ever use is the most important thing in the world, and aiding the world’s top dogs in their race to make exaggerated profits justifies every other human act — no matter how profane or obscene.

But what if this current “huge profit at any cost” myth that both Republicans and Democrats seem so fond of isn’t true after all — or has become sadly outdated since it was first invented back in Adam Smith’s time, way back in the eighteenth century, back when folks were just starting to come off the farm. What if it is finally time to update and modernize our most major myth?

And what if there are other myths out there right now that would serve us even much better? Consider, for instance, one alternative myth that comes highly recommended by Jesus, Buddha, Mohammad, Abraham, Rama and good old-fashioned common sense: That cooperation is the lodestone of human society — not huge individual profit at the cost of everything else.

And now that everyone in the world seems to be placing huge individual profits for the top dogs above every other human value, we are rapidly slipping back into those very early days of the human race before communal activity was invented — and our lack of community now, like our lack of community back then, is still endangering us. Profits won’t raise or protect our young. Profits won’t bring food to our tables. And profits won’t keep our world safe.

Wars create more huge individual profits than any other activity that humans can perform — even more profitable than owning a WalMart or stealing homes and jobs from the more gullible of us or fracking for oil. But wars also greatly lessen any chances that our human race will survive.

At the Green Party debate last week, Stein and Barr each talked about the programs that they would run if they were elected to the White House. And either one of these candidates would do an infinitely better job with regard to protecting and preserving the human race than did Bush I & II, Clinton, Romney, Reagan, Nixon and Obama did — all combined.

Both Barr and Stein talked about the insanely urgent imperative for us all to work together to cut greenhouse gases down to zero — using community-based solutions for these problems, solutions that would also offer us all meaningful jobs while we are in the process of saving the world.

Working together to save the human race? Now there’s a myth I can live with. Plus it’s so much tastier than the myth that profit for the few at the expense of the many is our eternal God.

Both candidates offered programs that will not only save our own lives but those of our children and grandchildren. And the idea that anyone with even half a brain in his or her head would chose Romney or Obama, slaves to an outmoded myth, over either of these two excellent candidates is just totally incomprehensible to me. Why chose bad over good? Why choose an 18th-century broken-down system over one that has been repeatedly proven effective over the last 250,000 years? It’s a complete mystery to me. Yet in 2012 you just know that we are gonna be stuck with either Romney or Obama (or yet another Bush). That just doesn’t make sense.

Are Americans currently suffering from the Stockholm syndrome or what? Yeah I guess.

Also please note that the debate between Stein and Barr took place at the Victoria Theater, a rather appropriate location considering that we now live in a world that completely embraces and supports the for-individual-top-dog-profit-only myth, one that wasn’t even working way back in Victorian times.

“Please, sir. I want some more…” young Oliver Twist asked of his betters way back then http://www.youtube.com/watch?v=sZrgxHvNNUc. And if this current myth of the Material God of Profit continues to reign supreme, then America in the future is going to make Dickensian England look like a walk in the park. And it will be you and me who will be bleating out, “Can I have more, sir?” to our betters, frequently and with fervor.

And what makes us think that our betters will ever let any of their ill-gotten wealth trickle down to the likes of us mere wretched drudges? Never gonna happen.

Under our current anything-for-profit mythology, America is definitely on a fast track back to Victorian times. “Fast times in Victorian England.” And 99% of us won’t be the ones that will be living Upstairs either. We’ll all be huddling together precariously in the cold, damp Downstairs instead — if we are lucky.

At the Victoria Theater last week, Stein and Barr both proved that they know something that both Democrats and Republicans clearly do not — that it is love and community that makes the world go around, that protects us and our families and that will save our future. Not profits for the rich.

PS: I will be going off to the Netroots Nation http://www.netrootsnation.org/ convention on June 7-11 in Providence, Rhode Island — featuring speakers like Krugman, Trunkpa, McKibben, Warren, Schneiderman, etc. So. Can anyone out there recommend a cheap hotel in downtown Providence where I can stay? Hopefully, near the convention center or at least on a bus route that runs past it on weekends?

PPS: I’ll be going up to Berkeley’s Tuolumne Camp near Yosemite over Memorial Day weekend, to stare at trees for a change instead of computers. But I will still be remembering our troops — remembering how they are sadly being used and abused by America’s wealthy top dogs. American soldiers should be heroically fighting to keep Americans safe, not profits of the unpatriotic neo-Victorian rich.

Catch up with Jane and Support her other projects by visiting her Blog @ http://jpstillwater.blogspot.com/