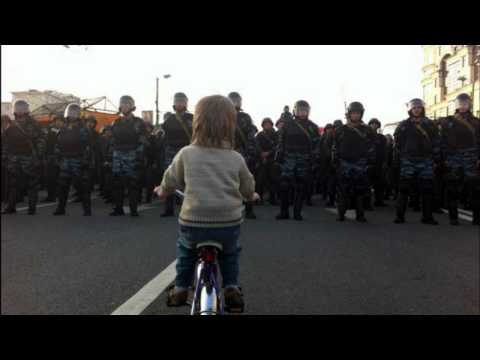 By now most of the world is familiar with the picture taken during the May 7th Russian protests.  The stark contrast of innocence facing down riot police has touched the world.  At the same time the rest of the world is slowly coming to terms with the fact that democracy is a lie and doesn’t work, Russians are protesting hoping to make a change within their system.

On May 7th as Vladamir Putin was sworn into office, he was not met with the types crowds he had in the past.  In their stead, there were hundreds of protesters outside being corralled by thousands of police.  Putin has been at the helm of Russia since 2000, first as President and Now as Prime Minister.  With this election, he will likely remain there until 2018 with the option to run again. 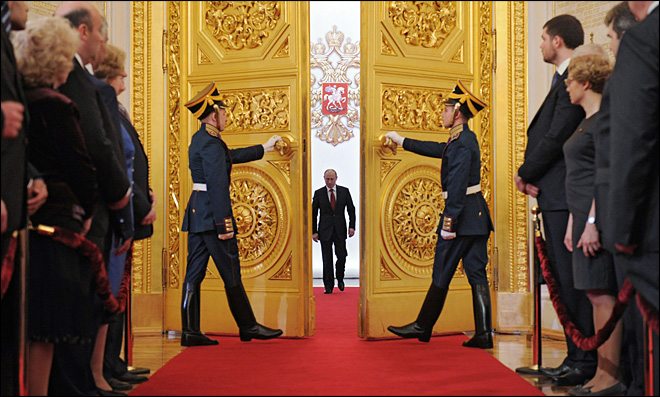 It is this long-term rule that people in Russia are tired of.

The demonstrators, separated into several groups, were met by helmeted riot police. A total of 120 were detained, including opposition leader Boris Nemtsov.

The day before, protests had turned violent when some demonstrators tried to march toward the Kremlin and riot police beat back the crowds with batons and detained more than 400 people.

While Putin has dismissed the Moscow protesters as ungrateful, pampered urbanites and agents of the West, others are taking them more seriously. “The government must understand that the split in society is getting wider, and the anger over unfair elections and the lack of normal dialogue is growing. In this situation, radicalism is inevitable,” Zyuganov said. “Any attempts to shut people’s mouths with the help of a police baton are senseless and extremely dangerous.” (Source: http://www.foxnews.com/world/2012/05/07/putin-sworn-in-as-russia-president-after-day-protests/#ixzz1uPDRz700)

This dismissiveness that characterizes Putin is most likely going to be his downfall.  Putin won nearly 64% of the vote. Opposition leaders have denounced the result as “illegitimate”.  It was in response to this supposed discrepancy, that the protests were formed.  Their anger has been fuelled by widespread reports of fraud, including evidence of ballot-stuffing and “carousel voting”, when voters are employed to cast their votes several times at various polling sites.

While OSCE states in their report: “The conditions for the campaign were clearly skewed in favour of one candidate. Also, overly restrictive candidate registration requirements limited genuine competition.” The rest of the report outlines a pretty straight forward election.

Certainly, most countries cannot hope to be any better, it has become an accepted fact that media will pick sides and money will out in such elections.

There is no denying that Putin in the last few years has moved away from the progressive policies of the 1990’s.  He has been more restrictive in response to protest and criticism, both within his country and internationally.  Even recently allowing the statement that Russia will launch pre-emptive strikes if NATO and the U.S.  continues its plans to implement the European Shield.

However, many Russians still believe Putin to be good for Russia, siting his unwillingness to support or excuse the U.S. her meddling in foreign affairs as well as the business he has lately brought to Russia.  Namely huge oil contracts with ExxonMobil for research and development in the Arctic Oil Fields.

But like so many political maneuvers, there is the cost of this deal.  Some believe Mikhail Khodorkovsky is paying that cost.  Khodorkovsky, once head of oil giant Yukos and Russia’s richest man, is now in jail for tax evasion, clearing the way for other oil deals to be made. Putin has also been accused of abusing his hold on energy, allegedly punishing fellow ex-Soviet states like Ukraine with price hikes when they leant towards the West.

It may be Russia’s improved economy that is allowing for protest where before it was impossible.  The cities of Russia are full of work.  With companies and corporations in need of qualified workers at a higher rate than seen in maybe 50 years, as well as supportive services, more people are comfortable.

Comfortable people have more time to think, intellectualize, discuss and ultimately protest.  As it is the city dwellers who are showing up for protests analysts feel it is their increased economic stability that makes them feel they should have more of a say in government.

Perhaps this makes Putin’s “Spoiled” statement make a little more sense.  After all it has been under his leadership that Russia has seen stability and growth.

Political analyst Masha Lipman points out however, “The turning point was the “trading places” trick in that occurred in late September. That was when Medvedev declared he would not run and that Putin would run instead. For his part, Putin said, if elected, he would make Medvedev his prime minister. Medvedev added that they had made this decision several years earlier. It was this contempt of the people that triggered change: the mood became a movement. Elections suddenly mattered: lots of young Muscovites volunteered as election observers and gained first-hand experience with blatant fraud. They changed their electoral behavior and voted for anyone to ensure that the United Russia (the party of Putin’s loyalists) would lose support and seats in the Russian parliament. This activism evolved into mass protests after the December 4 election. It was broadly seen as fraudulent, especially in Moscow where the rigging was especially blatant and the constituency was already more critical of Putin.” 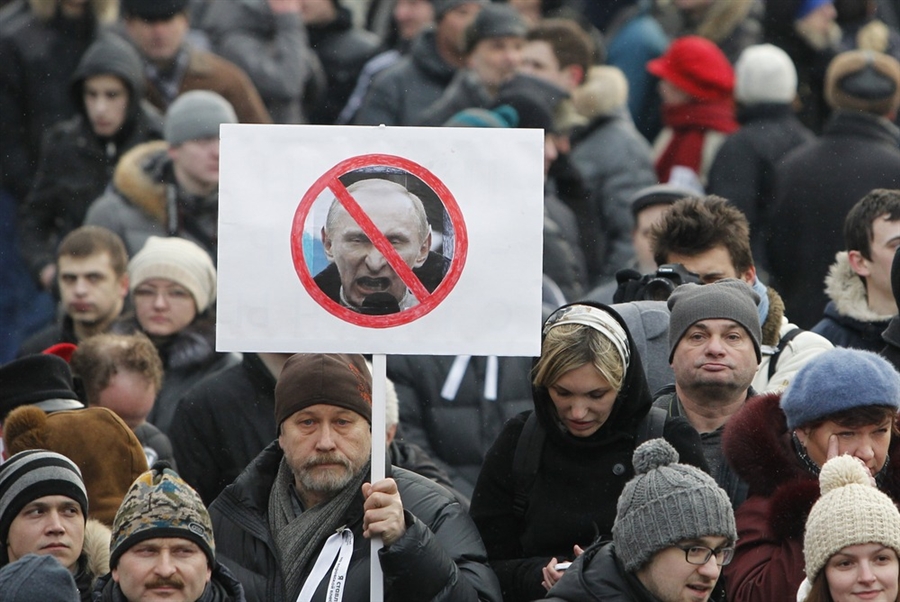 Are protests likely to do any good in a system where one man effectively has control of the government?  The people seem to think so. The opposition leader and member of the Solidarity movement political council, Boris Nemtsov seems to think so stating in an interview, “Russia’s future depends entirely on the level of protest, not Putin. Protests cannot constantly grow. They are not a linear process. The current protests do not amount to a revolution that would lead to explosive changes but the revival of civil activities and development of civil society. This is why there are always ups and downs. Indeed, now the protests are weakening, but this does not mean that they have exhausted themselves.” (Source: http://valdaiclub.com/politics/41601.html )

When asked if he thinks “The screws will be tightened.” (on the protestors) Nemtsov answers, “This depends only on us. If we sit in a kitchen, Lukashization is inevitable. If we take the initiative and protest, things will change. We are witnessing a decline of the Putin regime with all its convulsions, idiotic escapades and provocations. Clearly, it does not have the energy and strength to oppose the nation. But if the people sit quiet, the government will be able to tighten the screws with ease and Putin will turn into a 100% Lukashenko clone. He is 50/50 now.”

In agreement is Alexei Navalny, a crusading anti-corruption blogger and new-wave folk hero. He says: “A revolution is inevitable, and that it won’t be something plotted out ahead of time. It will start with an incident — an arrest, maybe, or a protest — and then snowball unexpectedly and unrelentingly. It will happen,” he told Esquire, “just because most people understand that this system is wrong.”

Grainne Rhuad- “A revolution is inevitable, and that it won’t be something plotted out ahead of time. It will start with an incident — an arrest, maybe, or a protest…”

Factory Prisons and the Creation of a Sociopath Society, Part II

Factory Prisons and the Creation of a Sociopath Society Pt. IV