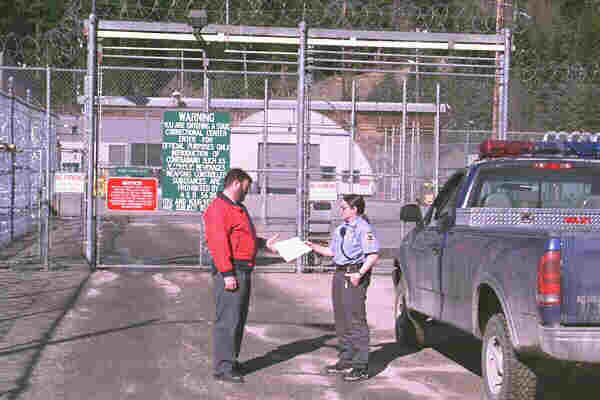 On the Inside Looking Out

Highland is the Hilton of Alaskan correctional facilities.  Of this I have no doubt.  The grounds are wide, the buildings scattered with pleasant, inter-connecting walk-ways.  Beside the pleasant cafeteria, it has a modest library with admittedly very few classics, and a despairingly small sci-fi collection for an avid science fiction reader, but it does have nearly every paperback best-seller a mainstream reader likes to collect.  The newspaper section was abominable.  Most of the newspapers were at least two weeks old and often had articles cut away from the selection, and magazines were apparently out of the question.

It has a wonderful music room.  This, I suspect, was due to the enormous efforts of a woman named Natalie Brooks, who spent the last thirty years of her life voluntarily giving music lessons to the inmates.  There is a wooden placard with her photo commemorating her selfless devotion, and whenever I’d pass it I’d kiss two fingers and touch it, as though paying homage to a shrine.  Natalie had been my music teacher when I was growing up and I can’t think of a kinder, gentler soul.  Her influence could still be felt in this minimum security prison.

It has an uninteresting gym.  The only equipment in it was a sagging net for volleyball; no basketball hoops, no tumbling mats, no rubber balls, rings, balance beam or wooden horse for gymnastics.  There were nearly always two long tables where you could buy hot coffee if you had money on the books, and an assortment of colored paper and drawings you could put together to make cards.  Since the rules were, you could not stand in one spot to talk while in the gym, the girls mainly walked around it in circles if they wanted to converse with a friend from one of the other houses.

It has an incredible crafts room, with looms, bolts of cloth, sewing machines, beads, buttons, thread, quilting frames.  Some of the Native work that came out of it was absolutely gorgeous, but I couldn’t help but wonder if the crafts woman received the price her work deserved.  These crafts women were long-term residents, slipped in and out quietly, so I never learned the mysterious ticket for being part of their crowd.

It has greenhouses with wonderful plants inside, flower beds nestled comfortably in long, wooden boxes, pleasant gazebos, and even playground equipment for the visiting children of long term inmates.

It has dogs of all shapes and sizes.  Inmates took care of these dogs, running or walking them through the yards on leashes, teaching them to heel, to sit, to come, to socialize with other dogs and be polite to strangers.  When the dogs were trained, having completed their sentences, they were put up for adoption to the outside world.

One of the houses even had a pool table.  None of these activities were allowed for people who were going to be there a few weeks, or even a few months.  You had to work your way up to them, and that work took at least a year.  If they only allowed Internet use, I felt I would have been ambitious enough to stay.

I found out quickly enough the pod I was in was considered “the hole”.  The only girls who stayed there were either those waiting to get out on bail, were not expected to be kept long, or who were regimented back as punishment.

The rules were strictest in the first house.  We had “count” four times a day at set hours.  We had to be in our house by then and answer roll call.  We were restricted in where we could go.  We could not visit the other houses, we had limited access to the yard, and could not watch the Saturday night movies on the big screen.  We were locked in our houses by 5:30 in the evening until 6:30 in the morning.  The other houses didn’t lock up until 9:30 p.m., and had much more freedom to roam.

When a girl got busted back to the hole, she did everything she could to be pleasant and entertaining so she could work her way out again.  Laughter was free, and laughter was abundant.  One girl who had been busted back delighted in telling us how she got there.  She said she had gotten tired of being strip searched.  When the guard asked her to spread her cheeks and cough, she farted.  Hiking one leg up on a chair, she grabbed her butt with both hands and demonstrated.  Fortunately, even the guards found her escapade humorous and in a few short days, her advanced house privileges were reinstated.

The guards were liberal with their own jokes.  After one of the girls asked if she could borrow some white-out, he came back a few hours later and told her it was time for her to scrape the white-out off her page as she had only borrowed it.

One charmed me the first day he appeared.  With his bushy eyebrows and twinkling eyes, he looked just like a leprechaun.  He opened the door to our house, stuck his head inside and asked, “got pot?”

After he left, the veteran girls whispered to me, “don’t let him fool you.  We call him the cutter.”

“Because his handcuffs are especially sharp.  If he uses them on you, your wrists will turn all black and blue.”

Now I was scared, and shrank away from him when he came in for count.  Finally one of the girls said, “McCarthy, show Karla your handcuffs.”  They had been especially made, alright.  The edges were the smooth and wide.  The clips were limited so they could not squeeze down on tiny, delicate wrists.  The “cutter” had taken the extra step to make sure he had the most humane handcuffs around.

However, this is not to say vacationland was completely perfect.  Contact with the outside world was practically impossible.  Although we were allowed two fifteen minute phone calls a day, we often spent the first ten minutes trying to connect, with the operator telling us each time, “I’m sorry.  All the lines are busy,” so that often times, the call only lasted five minutes.  Nor could the person answering on the other line switch the phone to the person you wanted to talk with.  If you were dialing your sister and her boyfriend answered, then handed it to the person you wanted to speak with, you were immediately cut off, with the operator announcing, “I’m sorry.  We do not accept third party calls.”

In order to receive visitors, the inmate had to fill out a request form to gain approval.  The request form wanted you to not only state the name of the person, but the street address, social security number, state identification and relationship to you.  The visitor had a two hour wait for a fifteen minute visit. 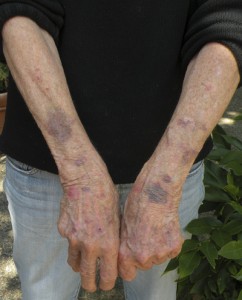 Over half the girls who came in sported new bruises around the wrists and forearms.  Some were bruised on the neck, upper arms, ribs and legs.  Some were bandaged and told they had sprains, but were never x-rayed to see if there was a break.

It’s the general opinion that if you’re in prison, you’ll receive free medical and dental care.  This isn’t completely true.  If you have two or three hundred dollars in your books, you can buy a new set of teeth or use it for commissary items.  The commissary offers a wide variety of products; refreshments, chips, cookies, microwave popcorn, coffee, cosmetics, stationary and pens, all at Walmart prices.  If you don’t have money on the books, the only way you’ll get these privileges is to work for thirty-five cents an hour.

If you’re in the hole, you can get a job mopping floors, doing laundry or working in the kitchen, but you don’t get one of the cushy jobs like dog training or working in the green houses the girls in the other houses are offered.  Still, when a job comes open, the girls line up like shopping day at the mall for it?  Is it to get their teeth fixed?  For commissary privileges?  No.  It’s for a four hour nightly pop of meds.

The meds are apparently so good, there are professional jail hoppers who come in and out on a regular basis for a thee day crash on meds.  They are called blue jackets because they always get busted for misdemeanors. Crazy Kelley was one of them. I had known Crazy Kelley for quite a few years, but I had not known she was a jail hopper, only as someone who routinely got into trouble.  The first time I saw her on the inside, she was in a separate house, but part of the same pod.  When I asked her what she was doing there, she told me she had gone to her ex-boyfriend’s house and burned some clothes she had given him.  He called the police and they busted her for destruction of property.

Her stay lasted three days, then she was out.  About a week later, she was not only back, she was sharing my room.  This was a little discomforting because Crazy Kelley was…well, crazy.  The first thing she did was demand her phone call, which disconcerted the house mouse.  The house mouse is the one who oversee’s and keeps order in the house; sort of the mama.  The house mouse was very unhappy because Kelley’s demand meant someone else would lose their phone call for the evening.  She finally sacrificed her own, but was very unhappy about it.  “The bitch,” she said, throwing herself in a chair.  “She can have her damned phone call, but I’m not doing her anymore favors”.

Her eyes lit up.  “Hey girls, did you hear that?  She’s Crazy Kelley and she’s called that for a reason.”

I was mortified.  I was afraid of what they would say when Kelley returned.  Sure enough, as soon as Kelley walked through the door, the house mouse exclaimed, “Hey Kelley, do you know what Karla said about you?”  She looked at me a moment while I cringed.  “She says she loves you!”

“Well, I love her too,” said Kelley complacently.  She had just made her phone call and had gotten her meds and went to her room to pop them.

I did love her enough to be concerned about her.  When they had brought her in this time, one of her hands was swollen and so bruised, it was turning black.  “What happened,” I asked.  “You just got out.”  She gave me an incoherent story; something to do with having called an ambulance because she was suffering a heart attack.  Instead of the ambulance coming, the police had showed up and stepped on her hand.

“I think you have two broken fingers.  When you get out, I want you to have them photographed and file a complaint against the police.”

“Uh huh,” she said, yawned, and went to sleep.  Three days later, she bailed out, although it’s doubtful she made her complaint.  As she was leaving, we all shouted, “remember, this isn’t a hotel!”  She nodded and waved cheerfully.

Karla Fetrow- Highland is probably the Hilton of Alaskan jails, but it is not without its flaws. Apparently, however, it has good meds.