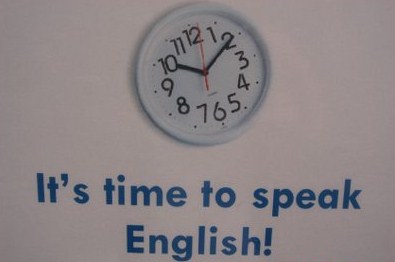 You’ll find them on the streets of just about every Indian town: dusty signboards, the paint beginning to flake off the battered aluminum sheets, proclaiming So-and-So English Coaching Class or English Academy, where one can learn “good spoken English for your bright career.”

But isn’t this redundant? Wasn’t the Indian subcontinent a British colony for close to two hundred years, whether that was under the East India Company or the Crown? Since the modern Indian educational system is a creation of the British, shouldn’t English be already taught everyone in schools as a matter of course? Then why should institutes like these coaching classes exist?

An old government-sponsored TV ad from the mid-1980s provides part of the answer.

It shows, as I remember, a black-and-white cartoon cafe in a foreign city; two “Indian” men are sitting talking to each other in English. A very Chinese-looking waiter (slant-eyes shown as lines) comes up and asks, in English, “Excuse me, don’t you have a language of your own?” The Indians say “Of course we do; our language is Hindi.” “Then,” says the waiter, “why are you talking in my language?”

This ludicrous bit of idiocy is so perfectly representative of the way the moronic Indian bureaucratic mind works, that it’s stuck in my brain for well over two decades now. It was meant, of course, to “promote” Hindi and the use of Hindi as the “national” language. Hindi, a language which is the mother-tongue of rather less than half of all Indians, a language which in many cases is more foreign than English to many Indians (especially in the East and South). Obviously, not only was this use-Hindi drive not going to succeed, it meant that parts of the country which weren’t Hindi-speaking would simply decide Hindi was going to be foisted on them by force and try and protect themselves by promoting their own local languages instead.

Usually, the way this language chauvinism worked was by banishing English, the language of the foreign rulers, from the curriculum of government-run schools and colleges, and force said schools and colleges to teach in the local language. The products of this education system, of course, found themselves all at sea when asked to compete for jobs or try and get a technical education. And some states tried to “compensate” by introducing a measure of English, somewhere around halfway through the average child’s school career. This English was taught on the side if at all (the teachers themselves not knowing much about the subject) and in at least one case, in West Bengal state, something bizarre called “functional English” was taught. This “functional” English basically mean that grammar, spelling, sentence construction and all the rest didn’t matter. All that mattered was somehow getting one’s message across – in whatever mangled form, so long as it was marginally comprehensible – and these people failed miserably even at that.

Meanwhile the politicians inveighed against English from public podia, and quietly sent their own progeny to the best private English-language schools, because they knew perfectly well that English was the key to prosperity. The private school industry flourished too, with little schools springing up in suburbs all competing to provide education in English, and making money hand over fist from the Great Indian Muddle Class. I remember seeing one such school which went by the same name as my old school, St Edmund’s, in a Lucknow suburb. It consisted of one single-storey suburban home and perhaps four rooms turned to classrooms – and all were packed.

Meanwhile, the average Indian parent was frustrated and helpless. He or she knew perfectly well that without English, the kids had no future. But private schools were far beyond his or her financial means, and the government schools taught no English that was worth the name. There was therefore a new market demand for English teaching outside the formal education system. Now, if we know one thing, it’s that when there’s a demand, there’s always someone to fulfill that demand. And of course Indians are known throughout the world for their opportunism; there’s even a saying that Indians can’t score goals in hockey because if given a corner they’ll build a shop on it.

And so it began; high up on the upper floors of tottering buildings, or along urine-tainted dank corridors behind tailor’s shops, sprung up the “English coaching institutes”. Many of them came with fancy names: Britannia English Coaching, Advent English Tutorials, and the like. None of them made any claim to either official recognition or certification, but they didn’t need it, because the demand to learn English was so great that they were making money hand over fist anyway. It’s absolutely certain that many of them were owned by the very same politicians who blocked English from the formal education system, because they were making so much money this way.

Some of the people who attended these places were quite surprising: not just the usual students taking English lessons on the side, but businessmen, salespeople, and even housewives. These housewives were a special category, because you must understand that especially in North India housewives have no independent identities of their own. They are expected to be virtual appendages of their men and have no personalities left, so one might wonder why they might be learning English of all things. The truth is utterly typical. They were attending class so that they could go home later and pass on what they learned to their hubbies, who were too busy or too embarrassed to come and take lessons themselves.

As for the quality of the English taught in these institutions, I love to remember a little episode from my Lucknow days. A friend of mine introduced me to a guy – I don’t remember his name now, but let’s call him Atul Verma – who had been attending one of these places for a month, and was very proud of his new English speaking ability. My friend urged him to introduce himself in English. This person turned slightly greyish around the lips, looked around furtively and mumbled “Myself Atul Verma.” And that was all the “English” either of us was able to get out of him.

Then there was erstwhile cricketer Kapil Dev, on TV in the late eighties, promoting another English teaching institute: “It’s-a really a good-a way to learn English.” It was the stuff of pure satire.

This isn’t really too surprising when you look at the teachers in these places, most of whom can hardly string together a coherent English sentence themselves, and who have their jobs only because they’re willing to work cheaper than anyone else. The owners of the coaching classes figure that since the pupils know no English at all anyway, they can’t criticize the quality of the teaching. All of which would be pretty damned hilarious if it weren’t so tragic, especially when you remember that the progeny of those coaching class owners certainly speak English with an artificial Americo-European accent and probably spend half the year on the other side of the planet.

Very recently, though, there’s some sign that the people are finally waking up. In India’s most populous state, Uttar Pradesh, the current government has finally decided to begin teaching English from the first grade onwards, as has the government in West Bengal. In both places, the same governments had been fanatically anti-English once but had to acknowledge the realities of people’s resentment about the “lost generations” of the non-English-speaking unemployable.

Of course, these states now have another problem, which is that there are not enough competent English-teachers to teach in the schools. That’s what you get when you throw away the English that you have without giving a thought for what’s to come.

Of course, once they recognize the problem, some kind of solution will finally be found. After all, in a world where, as I read recently, even North Korea has abandoned Russian for English as the foreign language it teaches in its schools, the allegedly hated colonial lingo has never quite been so important.

Myself being sure of this!