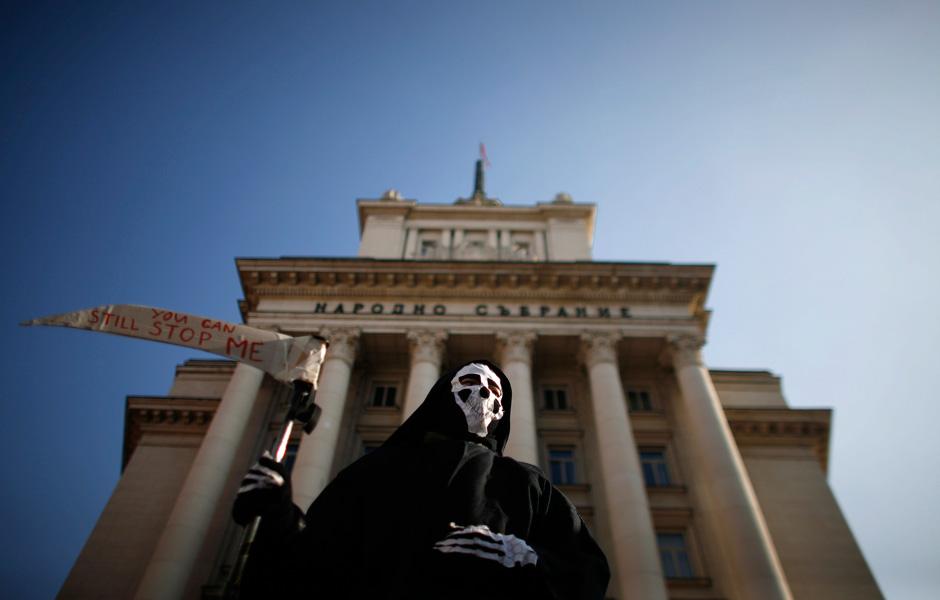 The other day I went to visit an old friend of mine who I hadn’t seen in years — but now she was dying, truly dying. It was a very sobering experience. Who would have thought that this formerly enthusiastic, vibrant and energetic woman would now be reduced an almost-human shell, a mere skeleton that breathed?

But the Grim Reaper eventually comes for us all. Except, of course, for me.

Having never known a world that existed without me in it, I find it hard to comprehend that such a world might someday exist. It’s hard for me to believe that someday even I too will be dead. And so I will probably live forever — but the rest of you won’t.

However, don’t despair just yet. Currently, large numbers of doctors and scientists all over the world are working their butts off to make sure that you too will have lives that extend far beyond today’s actuary tables. But on the other hand, so many corporate-owned politicians in Washington these days are also happily working their little hearts out to make sure that you don’t.

So many corporate-owned politicians in Washington these days seem to be going out of their way to work side by side with the Grim Reaper. They declare unnecessary wars. They tax us (not themselves) right down to the bone. They steal all our safety nets in order to have more money to add to THEIR safety nets. They bust our unions, steal our pension plans, enable Wall Street to invent pyramid schemes that ruin our economy, encourage big health insurance companies to cut us loose just when we need them the most, and allow Monsanto to poison our food, mutilate our seed stock and kill off our bees http://blog.buzzflash.com/node/13459.

In America, death seems to be coming earlier and earlier to those who vote.
And now GOP presidential candidate Mitt Romney has come up with an even more sure-fire plan to help out his new BFF, the Grim Reaper. Now Romney wants to not only eliminate most U.S. housing subsidies, he wants to eliminate the entire department of Housing and Urban Renewal as well. That will certainly speed up the Grim Reaper’s efforts for sure.
According to Forbes magazine, “In a closed-door Florida fundraiser for donors tonight, Mitt Romney offered a rare glimpse into his policy plans if elected President. And, as NBC reports, he got quite trigger-happy.” http://www.forbes.com/sites/markbergen/2012/04/15/mitt-romney-says-he-may-ditch-hud/

According to TruthOut, “Romney’s plan to eliminate HUD, assuming he didn’t shuffle its programs to other departments, would bring an end to critical programs like Section 8 housing vouchers and community development block grants. And eliminating housing assistance is even more problematic given the disproportionate percentage of veterans in the homeless population.” http://truth-out.org/news/item/8580-mitt-romney-tells-rich-donors-his-secret-plan-to-cut-housing-assistance

But what does Romney’s latest brilliant idea actually mean in terms of you and me? It means once again that the rich continue to get richer and live longer while the rest of us just conveniently die off too soon — because homeless people have a lot shorter life span than folks happily housed in the Hamptons. You know that senior housing complex in your town where seniors now get a rent break courtesy of HUD? That will be gone. And without HUD, frail and ailing seniors will soon be wandering the streets of your town, dying in alleyways and hogging up all the space in your cemeteries.

You know those low-income “housing projects” on the other side of your town where all the poor people now live? Those will be gone too. Too bad for them. And now desperate poor folks will be wandering around in your part of town, homeless too. And did I already mention that they will be desperate?

And all those homeless vets? There will be a lot more of them now — also wandering around your city or town.

Remember back in the 1970s when Reagan shut down all those mental institutions and suddenly we had all sorts of crazy people wandering around, hopefully taking their meds but probably not? And if Romney’s latest hot new scheme takes hold, even more of them will be back on your streets.

And physically handicapped people will have no place to live either. They too will be wandering around, trying to elude the Grim Reaper.

And the number of homeless children will dramatically increase. A lot more little kids will be living in cars — if they’re lucky.

And all of these homeless people, millions of them, will be pouring into the streets of your city or town, herded in your direction by both corporate-owned politicians in Washington and the Grim Reaper himself — who also will have a sharp eye out for YOU.

Currently, about the only thing that stands between what America looked like back during the 1930s Great Depression and what America looks like now is the department of Housing and Urban Renewal. HUD.

When we taxpayers give our money to HUD, what we are basically buying is window dressing, the illusion that America is still prosperous, still offers possibilities of advancement to its citizens and is still a First World country. Without HUD’s Section 8 vouchers and other forms of help with housing needs, that curtain of illusion will be pulled back and those rose-colored glasses will be unceremoniously jerked off. And America’s current dysfunctions will be seen clearly by all. And the Grim Reaper will be set free to wander our streets at will.

But Romney and his friends will never have to worry about the Grim Reaper coming into their homes. Why should they worry — when the G.R. will find it so much easier to come into ours. If we still have homes, that is.

Jane Stillwater-So many corporate-owned politicians in Washington these days seem to be going out of their way to work side by side with the Grim Reaper.

Factory Prisons and the Creation of a Sociopath Society